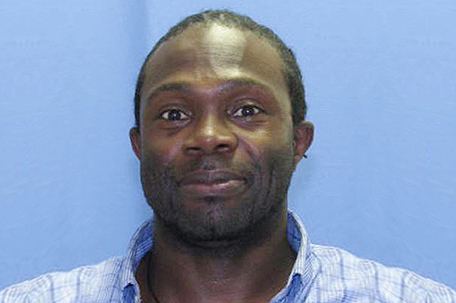 ABOVE PHOTO:  This is a Mississippi Department of Public Safety provided undated state driver’s license photograph of Andrew McClinton, of Leland, Miss., who was arrested by the Greenville Police Department, Wednesday, Dec. 21, 2016 in Greenville , Miss., in connection with the Nov. 1, 2016 fire at Greenville’s Hopewell Missionary Baptist Church. McClinton, 45, has been charged with one count of first degree arson of a place of worship and is being held in the Washington County Detention Center, pending an initial appearance before the municipal court. (Mississippi Department of Public Safety via AP,)

JACKSON, Miss. — The arrest of a Black man on a charge of burning a Black Mississippi church that was spray-painted with the words “Vote Trump” has sparked bickering online and consternation in the community surrounding the church.

Andrew McClinton, 45, made an initial court appearance Thursday in Greenville, a day after he was arrested and charged with a felony: first-degree arson of a place of worship. He requested a public defender and remained in jail with bond set at $250,000.

McClinton, who lives in the Greenville suburb of Leland, spent several years in prison in Mississippi on convictions of armed robbery and other crimes. He is a member of Hopewell Missionary Baptist Church of Greenville, which burned Nov. 1, a week before the presidential election.

In the days after the church fire, Greenville Mayor Errick D. Simmons — an African-American who took office several months ago on a pledge of racial unity — urged officials to investigate it as a possible hate crime. The FBI said it would do so, but no hate crimes charges have been filed.

Chris Orr, a Greenville resident and former police officer for the city, expressed frustration over the mayor’s early words about the fire.

“I have a lot of respect for the mayor,” Orr, who is White, said Thursday. “But, classifying this as a hate crime of a ‘historically Black church in a Black community’ before the investigation even got going good was basically profiling the suspect as a White person, whether he directly said it or not.”

Simmons did not return a call to The Associated Press on Thursday, but his twin brother, Democratic state Sen. Derrick Simmons of Greenville, said the mayor had the right approach.

“There is a dark past in America and in the Deep South regarding the burning of African-American churches,” Derrick Simmons said. “The way law enforcement authorities initially investigated this matter as a hate crime I believe was warranted, considering the past and the history.”

Many people on Facebook and other social media sites have voiced opinions similar to Orr’s, while some African-Americans expressed skepticism about a Black man being charged. Derrick Simmons said he has spoken to Greenville residents who were surprised an African-American is accused in the church burning.

“I think people across racial lines just generally do not expect the person charged with such an act to have the racial makeup of Mr. McClinton,” Derrick Simmons said.

Officials haven’t revealed what led to McClinton’s arrest. Mississippi Insurance Commissioner Mike Chaney, who is also the state fire marshal, said investigators don’t believe the fire and vandalism were politically motivated, despite happening a week before the contentious presidential election.

Greenville is a Mississippi River port city and hub of commerce in the cotton-growing delta. About 78 percent of its 32,100 residents are African-American.

Hopewell was founded in 1905 in the heart of an African-American neighborhood, and the congregation now has about 200 members. Some walls of the beige brick church survived the fire but the remains of the structure were recently torn down. Rebuilding could take months.

Since the fire, Hopewell members have been worshipping in the chapel at First Baptist Church of Greenville, a predominantly white congregation that says Hopewell can stay as long as it needs a home.

James Nichols, senior pastor at First Baptist, said Thursday that he’s been trying to get in touch with Hopewell Bishop Clarence Green since McClinton’s arrest. The two clergymen say they consider themselves brothers in Christ, and Nichols said it’s important that people not engage in divisive speculation about why someone would have burned Hopewell. He said the justice system will determine whether McClinton was responsible.

“A church is deeply hurt and wounded,” Nichols said of the arrest. “This is just going to peel that scab right off and make it raw again.” He called for prayer for everyone concerned.