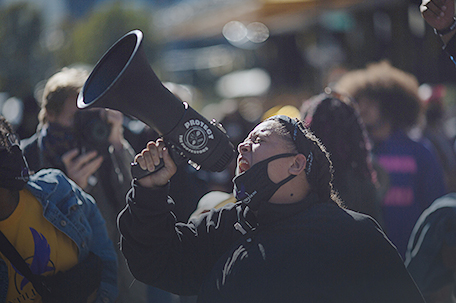 ABOVE PHOTO: Activists chant together during the “State of Emergency” rally calling for justice in the shooting of Breonna Taylor on Saturday, October 17, 2020, in New York.(AP Photo/Kevin Hagen)

It’s LOUD in the United States these days. Voices are being raised everywhere, speaking about everything.

They’re talking policing, health care, COVID. They’re discussing the economic safety net, the environment. They’re challenging racism, sexism and the myriad ways we come up with to judge each other. They’re defending tradition, law and order, and individual rights. And many people are listening, too, in entirely new ways.

The opportunity, the right, to be heard and to be acknowledged. In the history of this country, has there been anything more fundamental? Or more contested?

In that respect, 2020 is like any other year, only much more so. An election is approaching unlike any in recent memory, guaranteed to be a signpost in the long tale of what America is becoming and how it gets there. Divisions are sharp. Heels are dug in.

Yet the chaos unleashed by The American Breaking of 2020 — the pandemic, the disruption, the falling apart of so much we thought we knew — has created space for different voices to speak, for different conversations to take place and for different questions to be asked.

Dr. Uché Blackstock sees that firsthand. She’s been sounding the alarm bell for years, trying to get people to listen about racial inequity in health care, such as the increased risk of pregnancy-related death faced by Black women, a subject that can bring her to tears.

Enter 2020. What a difference a pandemic combined with racial unrest has made. The inquiries from those now wanting to work with her organization, Advancing Health Equity, are coming in so fast that she has to refer many of them to others.

“Because these inequities are being amplified and exposed, what I’ve always been saying and people who have come before me have been saying now has the opportunity to be heard,” says Blackstock, the organization’s founder and CEO and a medical contributor to Yahoo! News.

The pace of change has been, for many, foundation-shaking. It’s fueled by a diverse mix of thought and life experience and perspective. And the multiplicity of voices itself hints at something larger — a version of America that allows for multiple versions of America.

This notion, emerging as 2020 unfolds in its own weird way, has one particularly notable trait: It accepts that while your United States and your neighbor’s may in some ways overlap, and in other ways not at all, they’re equally American nonetheless.

“We were stuck in this status quo way of thinking and all of a sudden, boom! Something happens and the veil is pulled away and you can see the world differently,” says artist Robert Shetterly, who has made a project for almost 20 years of painting the portraits of Americans he considers courageous.

“For years, I’d hear the word ‘zeitgeist’ (and say), ‘What the hell is the zeitgeist?’” he says. “And then you’re in a moment when the zeitgeist changes and then you say, ‘Oh. That’s what it is.’”

A multiplicity of ways to experience American society would seem to fit with the nation’s long-told national story. After all, take out the loose change in your pocket, or a dollar from your wallet, and you can see it emblazoned officially — e pluribus unum, or “out of many, one.”

But in the country’s history, there has always been a chasm between paying lip service to the idea and actually living it — a constant struggle over ideas of assimilation, over what is the “real” America, who gets to claim it and who is ignored and forgotten.

Sometimes the divide is obvious. Take Dred Scott vs. Sanford, the 1857 Supreme Court case about slavery where Chief Justice Roger Taney wrote about Black people in the now widely-loathed majority opinion: “It is obvious that they were not even in the minds of the framers of the Constitution when they were conferring special rights and privileges upon the citizens of a State in every other part of the Union.”

Other times it’s more subversive, like the push-pull between the “heartland” and “coastal elites” or, in 2020, what words get used to describe whose lives matter.

Sometimes the interpretation treats “out of many, one” as a version of the Hunger Games, where the one left standing at the end — the loudest, the most formidable — prevails.

“Cultural memory … it’s often a very contested space where people are fighting over who gets to be remembered, who’s excluded,” says Marita Sturken, a professor of media, culture and communication at New York University.

“Just because you get a lot of people out on the street doesn’t mean you’ll always get what you want. That’s the big lesson,” said Fabio Rojas, professor of sociology at Indiana University Bloomington, who has studied the protest movement against the war in Iraq.

The idea of a dominant, monolithic America is hardly without its proponents in history and now — those who say that yes, there is ONE way of being American. Next week’s presidential election has drawn some clear lines around who sees the world in that manner and who doesn’t.

But the election, no matter its results, is not going to settle the question. Because it’s not a matter of a simple policy choice or executive order.

In the pandemic’s aftermath, Americans will have to figure out their age-old, still-unanswered question, more pressing now than ever: Can a nation be composed of different experiences and still have a national identity? Can it have ties that bind without becoming strangleholds?

Sarah Song, a professor of law and political science at UC Berkeley Law School, studies democracy and civic solidarity. She says the notion of many voices being heard, and which voices prevail, is going to be an ongoing struggle even with the forces that 2020 has unleashed.

“Maybe we’ll never agree on the content or what it is,” Song says. “But we have to figure out how to manage the disagreement.”

The voices of the unheard: The generation that will breathe