‘America is weeping’: Taking stock after three days of tragedy 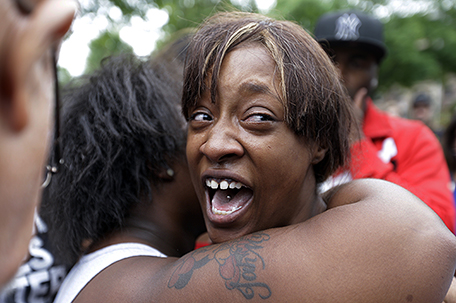 ABOVE PHOTO:  Diamond Reynolds, the girlfriend of Philando Castile of St. Paul, is consoled Thursday, July 7, 2016 outside the governor’s residence in St. Paul, Minn. Castile was shot and killed after a traffic stop by St. Anthony police in Falcon Heights, Minn. Wednesday night. A video shot by Reynolds of the shooting went viral.  (AP Photo/Jim Mone)

By Matt Sedensky and Sharon Cohen

Three tumultuous days have brought echoes of decades past and made clear a public that elected a black president hasn’t reconciled its fractured history with race, that a country that lived through unrest and assassinations in the 1960s and 1970s still bubbles with resentment and rage, and that bloody images of violent tragedy aren’t going away.

It started Tuesday, with a familiar scene: A black man, on the ground, shot by police, with the incident captured on cellphone video. That killing, of a 37-year-old named Alton Sterling, who police say was armed and selling CDs outside a Louisiana convenience store, ignited public outrage, and added Baton Rouge to a long list of places where the death of a black male at the hands of police has come under a cloud of suspicion.

It might have remained just that, with Sterling’s name added to a sorrowful litany alongside Michael Brown and Eric Garner and Freddie Gray.

In Falcon Heights, Minnesota, another black man was shot dead by an officer, this time after a traffic stop. As 32-year-old Philando Castile sat bloodied and dying, his girlfriend made a live broadcast on Facebook that gave an eerie look into the aftermath. As the video freezes and the woman loses composure and lets out a scream, the sweet voice of her 4-year-old daughter chimes in to comfort: “It’s OK, I’m right here with you.”

And then, like clockwork in a new deranged norm, came another evening, another night of tragedy. 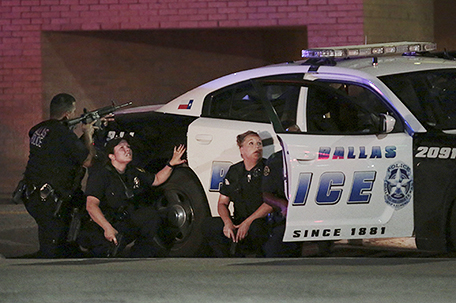 As demonstrators amassed in Dallas on Thursday to mark what had transpired in the two preceding days, five police officers there to help keep the peace were shot and killed and seven other officers and two civilians were wounded. Authorities said it was the work of a sniper. The suspect, who was killed by police, had said he was upset by the recent shootings and wanted to kill whites, particularly white officers.

It was a devastating climax to three horrific days that Americans are struggling to understand.

At the Justice Department, Attorney General Loretta Lynch called it “a week of profound grief and heartbreaking loss.” In Chicago, Archbishop Blase Cupich said, “Every corner of our land is in the grip of terror.” On Capitol Hill, civil rights icon Rep. John Lewis of Georgia said, “We feel the pain. We feel the hurt.”

Kevin Boyle, an American history professor at Northwestern University, thought of the late 1960s and the 1992 Los Angeles riots, seeing “terrifying parallels” and “echoes for me of other really incredibly tense points.” The presence of video documentation of the incidents calls attention to strife that had previously existed only in agonizing private memories.

“It’s not that the incidents are new,” he said, “it’s our ability to see them.”

At the National Law Enforcement Officers Memorial in Washington, D.C., Kim Hernandez welled with tears Friday as she took stock of the week. “There’s just a really scary sense of humanity right now,” she said. “I don’t know what’s going on. I don’t know how we can fix it, but it doesn’t seem like talking is working.”

At Bible Way Temple in Raleigh, North Carolina, Darnell Dixon Sr., the chief pastor, wondered why more positive change hasn’t come. He presided over the funeral of another black man who was shot by a white officer earlier this year, and was part of a dialogue with police that followed and brought him a sense of healing.

“I started feeling better,” he said. “But yesterday set me back. It bewildered me.”

As rancor grew, a handful of violent incidents against police arose across the country, including the shooting of an officer in Valdosta, Georgia. Authorities said a man called 911 to report a break-in, then ambushed the responding officer.

Some lashed out at the movement that was born of police shootings of blacks and even at President Barack Obama, accusing him of fueling divisions among people of color and whites. Conservative radio host Rush Limbaugh called Black Lives Matter a “terrorist movement,” while U.S. Rep. Roger Williams, a Republican from Texas, said the “spread of misinformation and constant instigation by prominent leaders, including our president, have contributed to the modern day hostility we are witnessing between the police and those they serve.”

Black Lives Matter organizers condemned the violence in Dallas, and police haven’t given any indication that the shooter had anything to do with the group.

If the gravity of it all seems clear, the road from here does not.

Does the assemblage of killings by police around the country and the resulting Black Lives Matter movement lead to more than candlelight vigils and calls for change? Does the anger that seemingly fueled the shootings in Dallas precipitate and lead to similar attacks on police akin to Black Panther-style violence of long ago? Is this a turning point or simply a continuation?

Jeanine Bell, an Indiana University professor who authored “Policing Hatred: Law Enforcement, Civil Rights, and Hate Crime,” said the week will not go down as a pivotal point unless it leads to substantive change by police that goes beyond simply diversifying forces and introducing anti-bias training.

“Until there is a call for reorganization of policing practices, not just small changes, then it’s very hard to call this a turning point,” she said.

Pew Research Center, in a survey released last month, found more than 4 in 10 blacks doubt the nation will ever make changes necessary for racial equality with whites and that nearly two-thirds of black adults believe blacks are treated less fairly than whites in the workplace.

This week’s killings come in the midst of a divisive presidential election, amid fears of terrorism and on the heels of the latest mass shooting that claimed 49 innocent lives. The killings in Dallas happened just blocks from the book depository where another sniper took aim at President John F. Kennedy. It ended his life and a period of American history that became regarded as “Camelot,” and became a presage to the strife, unrest and other assassinations that followed.

Two blocks from the shooting site, in Dallas’ historic West End district, Joe Groves owns Ellen’s Southern Kitchen & Bar, where dinner was underway when the gunfire sounded. Many of the officers who were assigned to Thursday night’s demonstration are friends of his, and as the violence erupted, he tapped out three words to two of his uniformed friends: “Love you man.”

Though Groves is white, most of his 72 workers are black and Latino; his clientele is diverse as well. The tension that came to a head in the shootings wasn’t something he’d experienced personally, until now.

On Friday, his restaurant was open again, but the atmosphere was noticeably different. He said people are speaking more quietly, and the enormity of it all seemed to weigh. He sees some good coming of it all, a connectedness between strangers that is rarely there, a willingness to make eye contact. And even though he thinks race relations may have reached their rock bottom, he sees a reason for hope there, too.

“The good news about rock bottom,” he said, “is the only way out is up.”