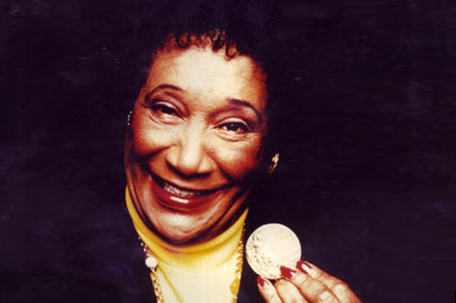 Davis’ death was confirmed by her daughter, Evelyn Jones.

“Going into the USOC Hall of Fame is as good as it gets,” she told The Associated Press in a 2004 interview. “It’s like Cooperstown, Springfield and Canton,” she said, referring to the sites of other prominent Halls of Fame.

Davis was the only American woman to win a gold medal at the 1948 games. According to Olympic historian David Wallechinsky, Coachman was honored with a 175-mile motorcade in Georgia when she returned from London. However, the black and white audiences were segregated at her official ceremony in Albany. 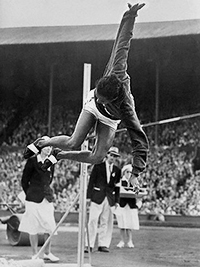 PHOTO:  Tuskegee Institute alumnus Alice Coachman is seen breaking the women’s high jump record in the 1948 Summer Olympics in London with a leap of 5 feet, 6 1/8 inches.  (Courtesy of Library of Congress)

Recollecting her career in the 2004 interview, Davis speculated that she could have won even more Olympic medals, but the Olympics weren’t held in 1940 or 1944 because of World War II. She retired at age 25 after winning the gold medal in London.

“I know I would have won in 1944, at least,” said Davis. “I was starting to peak then. It really feels good when Old Glory is raised and the National Anthem is played.”

Davis attended Tuskegee University and also played basketball on a team that won three straight conference basketball titles. She won 25 national track and field championships — including 10 consecutive high jump titles — between 1939 and 1948, according to USA Track and Field.

Growing up in the deep South during the era of legal segregation, Davis had to overcome multiple challenges.

The New Georgia Encyclopedia says she was prohibited from using public sports facilities because of her race, so she used whatever equipment she could cobble together to practice her jumping.

“My dad did not want me to travel to Tuskegee and then up north to the Nationals,” Davis told the AP. “He felt it was too dangerous. Life was very different for African Americans at that time. But I came back and showed him my medal and talked about all the things I saw. He and my mom were very proud of me.”

Davis won her first national high jump title at age 16 according to USA Track and Field, and worked as a school teacher and track coach after retiring. An elementary school in her home town is named in her honor and opened in August 1999 according to Dougherty County schools officials.