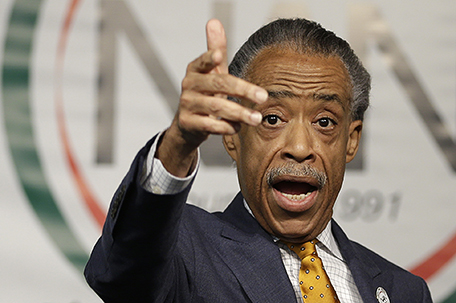 ABOVE PHOTO:  Rev. Al Sharpton speaks during a news conference in New York, Tuesday, April 8, 2014. Sharpton says a report that he spied on New York Mafia figures for the FBI in the 1980s is old news.  (AP Photo/Seth Wenig)

NEW YORK— The Rev. Al Sharpton admitted last week that he helped the FBI investigate New York Mafia figures in the 1980s, even making secret recordings that appeared to help bring down a mob boss.

But at a news conference, Sharpton insisted he never considered himself a confidential informant, despite a report identifying him as the “CI-7” referenced in recently released court records.

“I was never told I was an informant with a number,” Sharpton told reporters at his Harlem headquarters in response to the report posted Monday on The Smoking Gun website. “In my own mind, I was not an informant. I was cooperating with an investigation.”

The report’s timing became a distraction for Sharpton a day before he was to host President Barack Obama as the keynote speaker at the annual convention his civil rights group, the National Action Network. The MSNBC host complained that he was unfairly portrayed as a turncoat mob associate instead of a victim in front-page tabloid stories featuring headlines like “REV RAT” and 30-year-old photos of him when he was overweight and wore his hair in a bouffant.

Sharpton said that he went to federal authorities after low-level mobsters warned him and others they would be harmed if they continued to compete for a stake in the music business — a claim he recounted in his 1996 book, “Go and Tell Pharaoh.”

“We were threatened, and that’s not a new story,” Sharpton said. “It’s in my book.”

Sharpton claimed that after the FBI targeted him in a failed sting, he “fought back and said, ‘I’m being threatened. These are the kinds of guys you should be going after.’”

For about two years, the FBI enlisted Sharpton to record conversations with mob figures using a bug hidden in a briefcase, he said. His role, he said, was to try to get them to repeat the threats and also talk about any other crimes.

He added: “I made the right decision. … The only thing I’m embarrassed by are those old fat pictures.”

A spokesman for the FBI’s New York office declined to comment on Tuesday.

The Smoking Gun report was based on court documents and FBI memos released in response to Freedom of Information requests. They included a draft affidavit by an FBI agent investigating allegations that the Genovese crime family had a lucrative “stranglehold” on music industry executive Morris Levy.

The FBI “has developed a relationship with a confidential informant, hereafter referred to as ‘CI-7,’” who agreed to record conversations with a mobster with inside knowledge of the Levy shakedown, the affidavit says. In one conversation in 1984, it says the mobster told CI-7 that Levy “has tried to end his relationship with the Genovese family 10 to 15 times but that he has ‘only has one way out,’ at which point (he) gestured like someone pointing a gun and pulling the trigger.”

The information from Sharpton helped investigators persuade judges to approve wiretaps on phones at the Manhattan home of Genovese boss Vincent “The Chin” Gigante and to bug a social club where the Gigante hung out, the report said.

Gigante, who known for faking mental illness by shuffling through his Greenwich Village neighborhood in bathrobe and slippers, was convicted in 1997 of racketeering and murder conspiracy. He died in prison at 77 in 2005.

“What’s obvious from what he said this very morning is that he was asked by the FBI to support their efforts and he agreed to help, and that’s exactly what a citizen should do,” the mayor said.

Sharpton aide to Black journalists: get on board