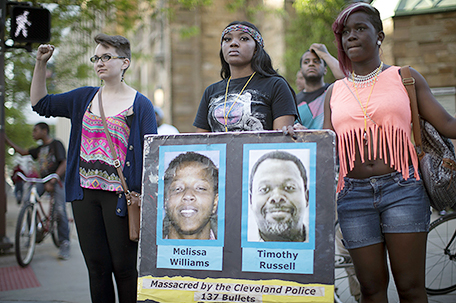 May 30, 2015 Category: Week In Review Posted by: Philadelphia Sun Staff

ABOVE PHOTO:  Demonstrators pause to stand in solidarity during a protest against the acquittal of Michael Brelo, a patrolman charged in the shooting deaths of two unarmed suspects, Saturday, May 23, 2015, in Cleveland.  Brelo was acquitted Saturday in a case involving a 137-shot barrage of gunfire that helped prompt the U.S. Department of Justice determine the city police department had a history of using excessive force and violating civil rights. (AP Photo/John Minchillo)

CLEVELAND — Cleveland emerged unscathed and intact after a day of protests following the acquittal of a white patrolman who had been on trial in the shooting deaths of two unarmed black suspects killed in a 137-shot barrage of police gunfire.

Officers arrested 71 people the night after the verdict, though there was nothing close to the violence other cities have experienced over the treatment of black suspects.

But Cleveland is not yet done dealing with deadly police encounters.

Two other high-profile police-involved deaths still hang over the city: a boy holding a pellet gun fatally shot by a rookie patrolman and a mentally ill woman in distress who died after officers took her to the ground and handcuffed her.

The deaths of 12-year-old Tamir Rice and 37-year-old Tanisha Anderson occurred just eight days apart last November. An investigation by the Cuyahoga County sheriff’s department into Tamir’s death is nearly finished and ready to be given to county prosecutors to decide whether to pursue criminal charges against the patrolman.

The status of the investigation into Tanisha Anderson’s death is unclear. A medical examiner said she died of positional asphyxiation, which means she couldn’t breathe, and ruled her death a homicide. City and police officials did not respond to messages Sunday seeking an update on the case.

Tamir and Anderson, like the two motorists whose deaths were at the center of Saturday’s verdict, were black. The rookie officer who fatally shot Tamir is white. In the Anderson case, one officer is white and the other is black, although a family lawsuit does not make an issue of race.

The acquittal of Patrolman Michael Brelo in the November 2012 deaths of Timothy Russell and Malissa Williams prompted a spontaneous protest outside the courthouse that later merged with a planned protest over Tamir’s death at the recreation center where he was shot.

Tamir’s grandfather expressed his outrage to a crowd of several hundred people.

Walter Madison, an attorney for Tamir’s family, said he’d been cautiously optimistic about the outcome in the Brelo case. He said he respected the judge’s legal analysis in acquitting patrolman Brelo, but wondered if the prosecutor’s office would have better served justice by pursuing some other charge, such as conspiracy.

Madison wants Tamir’s case to be reviewed by an independent prosecutor instead of the county prosecutor.

“It would be the best practice to avoid the appearance of impropriety at this particular junction,” Madison said.

A spokesman for the county prosecutor’s office had no comment Sunday on Madison’s request for an independent review.

The protests that weaved through downtown Cleveland were boisterous but peaceful throughout the day Saturday. It was only later that trouble began with fights, bystanders being pepper sprayed by protesters and confrontations involving police, some of whom wore riot gear. The largest number of arrests occurred in the popular Warehouse District, where a large group of protesters gathered in an alley and refused to disperse.

On Sunday, Mayor Frank Jackson thanked the vast majority of protesters who remained peaceful and respectful as they voiced their frustration with the verdict.

Brelo, 31, still faces administrative charges while remaining suspended without pay after being found not guilty of two counts of voluntary manslaughter. Brelo and 12 other officers fired 137 shots at a car with Russell and Williams inside at the end of a 22-mile chase.

Brelo fired 49 of those shots that night, but it was the final 15 fired into the windshield while he stood on the hood of Russell’s car that led to his indictment and a four-week trial. After his acquittal, the U.S. Department of Justice — which had previously determined that Cleveland police had a history of using excessive force and violating civil rights — said it would look into the matter.

And the prosecutions related to the deaths of Russell and Williams are not over, either. Five police supervisors have been charged with misdemeanor dereliction of duty for failing to control the chase. All five have pleaded not guilty. No trial date has been set.