‘A time to pick up:’ Hurricane-hurt Louisiana begins cleanup 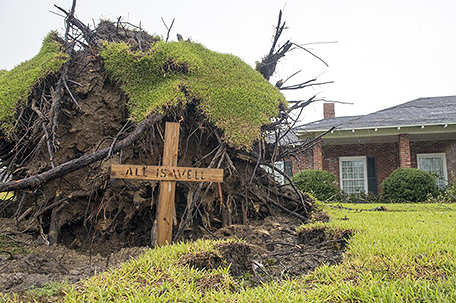 By Gerald Herbert and Nomaan Merchant

CAMERON PARISH, La. — Residents in southwestern Louisiana embarked Saturday on the epic task of clearing away felled trees, ripped-off roofs and downed power lines after Hurricane Laura tore through parts of the state. The U.S. toll from the Category 4 hurricane rose to 16 deaths, with more than half of those killed by carbon monoxide poisoning from the unsafe operation of generators. The latest deaths included an 80-year-old woman and an 84-year-old man who died from just such a poisoning.

President Donald Trump toured the damage from Laura in Louisiana and Texas last Saturday. He and Gov. John Bel Edwards made their way down a street blocked by trees and where houses were battered by the storm, which the governor said was the most powerful hurricane to strike the state. That means it surpassed even Katrina, which was a Category 3 storm when it hit 15 years ago on Saturday, to the day.

Although the storm was not as bad as once feared, authorities were still warning it could leave people without running water or power for weeks in the stifling late summer heat. It made roads impassable, tore roofs and walls off buildings and strew debris about.

It also led to fires at a chlorine plant in Westlake in the hard-hit Lake Charles area. Last Saturday, crews were battling a new blaze, leading authorities to broaden a shelter-in-place order to 1 mile around the plant, state Department of Environmental Quality spokesman Greg Langley said. It was at least the second fire at the BioLab plant, which makes swimming pool chemicals, after crews extinguished one that filled the skyline around Lake Charles with billowing black smoke after Laura hit. Authorities believe chemical reactions are causing the soaked chemicals to overheat and burst into flames.

Langley said he believed the new fire was about 90% out by last Saturday afternoon. The shelter in place means any residents of the industrial area around the plant are to stay inside with windows and doors shut, in summer heat with no electricity to power air conditioners.

In Lake Charles, a city of 80,000 residents hit head on, Mayor Nic Hunter said the National Guard would begin handing out tarps last Sunday to residents so they could cover damaged roofs.

Katlyn Smith, 24, found more than just damage to the roof when she returned to the Jesse James trailer park in the city last Friday to see what remained of her two-bedroom trailer. Speaking Saturday from the park by telephone, she said the wind ripped the roof off “like a sardine can. And then the walls folded in.” Many of the other trailers in the park were also decimated.

Friday night, the few remaining residents barbecued roasts, burgers and chicken in a makeshift grill before the food goes bad. Her car has a flat tire, and she has no cash on hand, so she’s not going anywhere for now.

“There is a time to cry and to be sad and there’s a time to pick up, too. You have to pick yourself up and keeping going and my strength comes from God and my fiance,” she said. Simply driving was a feat in Lake Charles. Power lines and trees blocked paths or created one-lane roads, leaving drivers to negotiate with oncoming traffic. The parish sheriff’s office posted an extensive update on their Facebook page of streets that were impassable.

The mayor has cautioned people that there is no timetable for restoring electricity and that water-treatment plants “took a beating,” leaving barely a trickle of water coming out of most faucets. Several hospitals in Calcasieu Parish and one in Cameron Parish evacuated critical patients to other facilities because of water and power issues, the state health department said. Other hospitals are operating on intermittent generator power.

Nineteen babies who weathered the hurricane at Lake Charles Memorial Hospital were brought to other hospitals across the state. The babies, some on respirators or eating via feeding tubes, were at the neonatal intensive care unit of another hospital and had to be moved Wednesday hours before the hurricane arrived out of concerns that storm surge would swamp the one-story building. Hospital officials said they then decided to move them out of Lake Charles when it became apparent that it could be weeks before water was restored.

Along the coast in Cameron Parish, the receding storm surge left behind sediment and debris. Roads appeared still impassable. At South Cameron High School in Creole, parts of the roof of one building were ripped off, and debris was strewn everywhere. A barge appeared tilted on its side along the water.