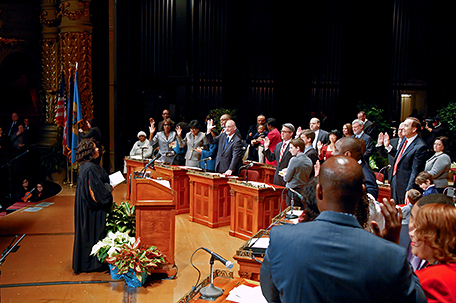 In order to make Philadelphia the best it can be, a lot of Divine Guidance was requested at Monday’s City Government Inaugural Ceremonies.

While it wasn’t quite a church service, the Inauguration of Mayor Jim Kenney and the 2016-2017 version of Philadelphia City Council was a ceremony filled with pomp, circumstance and a whole lot of prayers.

From the prayers of various ministers for the Mayor and City Council to the prayer from the Rev. Terrence Griffith, president of the Black Clergy of Philadelphia and Vicinity for the city itself, seeking divine guidance for the officials taking the oath of office was a central theme for the event.

Kenney promised an administration would focus on “efficient and effective” services in some pretty important areas, like education and criminal justice.

For education, that means a focus on making all schools a school of choice by partnering with agencies that can fill in the gaps that keep children from learning, Kenney said.

“Providing efficient and effective services means educating all of our children where they live,” he said. “Our kids should not have to wake up before dawn and take three different buses to get to a good school. But in order to make quality schools in every neighborhood a reality, we will need the private sector and out non-profit partners to come together with the city to create community schools.”

As he did throughout his successful mayoral run, Kenney recognized that another big problem the city needs to tackle is the relationship between citizens and law enforcement. Because Mayor Kenney was endorsed by Philadelphia’s Fraternal Order of Police, there were concerns that he might be too beholden to them.

Kenney tried to assuage those fears.

“Providing efficient and effective services also means that everyone can walk the streets safely and with dignity,” Kenney said. “But in order to make that a reality in Philadelphia, we will have to put aside our differences and acknowledge both: that Black Lives do Matter, and that the overwhelming majority of our police are decent, hard working public servants who risk their lives every day. We just need to give them the tools to establish strong relationship with the communities they are sworn to protect and serve”

But in order to get all of this done, Kenney is going to need an ally in Council President Clarke.

If his acceptance speech was any indication, Clarke is willing to be that ally. After spending four years in various disputes with outgoing Mayor Michael Nutter, he’s looking forward to a better working relationship with the new Mayor.

“I’m excited,” Clarke said. “I think we’ll have a true partnership. We’ll be working together in a meaningful way and we’ll have interaction on a consistent basis. I like that Mayor Kenney says that he wants to do things collectively.”

Those collective works have already started. Clarke and Kenney took a trip to Cincinnati to look at the city’s community schools program, and then returned to Philadelphia to talk to the stakeholders needed to make it possible here.

“We have had productive conversations with our major universities – including Penn, Drexel, and my personal favorite, Temple – about increasing partnerships with Philadelphia public schools,” Clarke said. “I want to thank all of the college and university officials who have looked me in the eye and told me they are committed to doing more for our young people. Together, we must find a way to get more Philadelphia public schools students on a path to tech, health, and science jobs right here in our city. That, by the way, is how you really address economic inequality: Education plus opportunity.”

That the two men want to work together to create community schools in Philadelphia was music to the ears of Jerry Jordan, president of the Philadelphia Federation of Teachers.

“I’m very optimistic,” Jordan said. “It’s been a position, particularly the community schools model, that the Philadelphia Federation of Teachers has been advocating for years. We know that we can’t do it all in a school by ourselves. Our children have so many needs, needs that there is expertise in this city because we are a city of [educational and medical facilities] who can provide additional services and supports.”

Another way that the two men intend to work together is by approaching legislators in Harrisburg about amending the Commonwealth’s uniformity clause in the name of job creation, Clarke said.

“A targeted and coordinated effort among the private, public and nonprofit sectors to secure an amendment to the uniformity clause in the state constitution will allow our city – for the first time in decades – to truly reform our tax structure,” he said. “This isn’t just about delivering tax relief for homeowners, although that is the goal. This is about making targeted investments to spur economic growth and prosperity.”

Clarke also said that in the not-too-distant future, announcements of reforms in the areas of criminal justice and energy will be announced. While not giving a lot of detail, Clarke said that these energy reforms, will create about 10,000 “green” jobs.

But while there were few surprises following an election where turnout was low and the results were all but decided for the Council’s Democratic majority in the May Primary, there was one. Sixth District City Councilman Bobby Henon is now the body’s new Majority Leader, replacing Fourth District Councilman Curtis Jones Jr.

When asked about this change, and what part he might have played in it after the inauguration, Clarke was coy.

“Councilman Henon was able to get the necessary votes to become Majority leader,” Clarke said. “It’s an internal process. And that’s the way it’s going to stay.”