A day of “Reckoning” 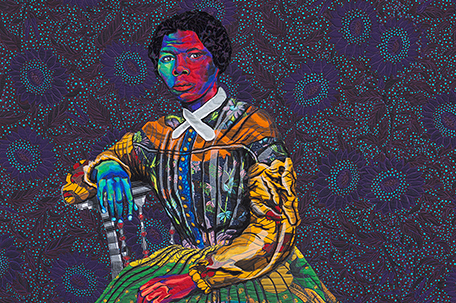 With a new exhibit connecting art and social justice, the National African American Museum of History and Culture hopes to showcase how artists interpret the movements that have shaped Black lives.

Throughout history, the arts have supplemented protests of all forms of oppression through music, dance, and the visual arts.

The Smithsonian’s National Museum of African American History and Culture continues the celebration of its fifth anniversary with “Reckoning: Protest. Defiance. Resilience.” This exhibit features painters, photographers and other visual artists as they explore how the movements that inspired their art are paired and show just how much one impacts the other.

At a time when the African American community is dealing with a variety of issues ranging from gun violence to police brutality to the continued onslaught of the COVID-19 pandemic, “Reckoning,” which opened on Sept. 10, puts the struggle front and center for visitors to see through the art presented, said Kevin Young, NMAAHC’s director.

“Visual artists have long evoked questions of beauty and history, and the Black painters, sculptors, photographers and textile artists featured in this show exemplify the tradition of resilience in times of conflict and the ritual, and even defiant pleasures of creation,” he said. “We are in a renaissance of Black culture and art, and much of the art is commenting on this moment.”

The pieces selected to embody beauty and history during the current time include 27 newly exhibited pieces from such artists as Jean-Michel Basquiat, Sheila Pree Bright, Shaun Leonardo and David Hammons.

But the centerpieces of the exhibit are Bisa Butler’s “I Go To Prepare A Place For You,” a portrait of Harriet Tubman done in cotton, silk and velvet and a portrait of Breonna Taylor from Amy Sherald, the artist best known for painting the official portrait of former First Lady Michelle Obama. The portrait first appeared as the cover of Vanity Fair’ Magazine’s September 2020 issue.

The pieces show the artists’ acknowledgment that there are some things that are more important than popular art, said Tuliza Fleming, the museum’s chief curator of visual arts and lead curator for “Reckoning.”

“The exhibition seeks to forge connections between the Black Lives Matter protests, racial violence, grief and mourning, hope and change,” she said. “Additionally, it will reveal that many African American artists feel they have more at stake, beyond being included in the canon of American art.”

In addition to the art itself, the audience can use their mobile phones to see the ways that the pieces in “Reckoning” connect to other pieces and themes within the NMAAHC via video and pop-up digital elements.

“Reckoning: Protest. Defiance. Resilience” is located on the fourth floor of the NMAAHC. You can go to: www.NMAAHC.si.edu for tickets and more information on the exhibit itself.