A Cause For Optimism 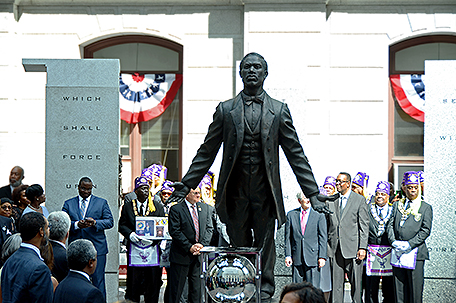 With the unveiling of the new Octavius V. Catto monument at City Hall on Tuesday, the possibility of history being more inclusive rises.

Most Tuesdays, Kebbeh Howard and Nabriya Johnson come to City Hall for their internship in Councilwoman Blondell Reynolds Brown’s office and get the chance to see city government in action.

But on Tuesday morning, the sophomores from Prep Charter High School in South Philadelphia were among those on the South Apron of City Hall witnessing history as the monument to Octavius V. Catto was dedicated.

While both of them had taken history classes, Catto and his achievements weren’t among those talked about. 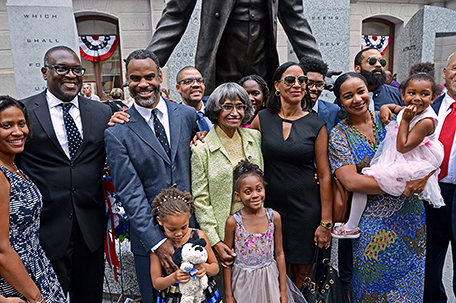 “I didn’t know anything about him at first,” Kebbeh, 15, said. “I got to know a little once we came here. But I’m glad that I got to see this because he was the first Black man to get his own monument here in Philadelphia. It took a long time.” 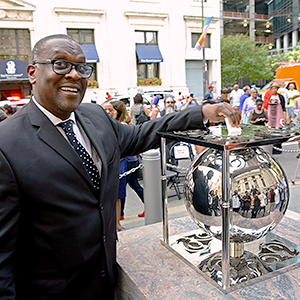 Hundreds of people gathered on City Hall’s South side on Tuesday to celebrate the unveiling of the monument. With this monument, O.V. Catto becomes the first African- American to get a standalone monument in a public space in Philadelphia, said Carol Clark Lawrence, Chair of the Catto Memorial Fund.

(The Joe Frazier statue, another standalone statue of an African American, is displayed at Xfinity Live in South Philadelphia.)

To the sounds of the African Episcopal Church of St. Thomas Choir in the background, a memorial to a man who was shot dead on South Street for trying to insure the rights of Blacks to vote was unveiled. Organizations representing all aspects of Catto’s life were in attendance. 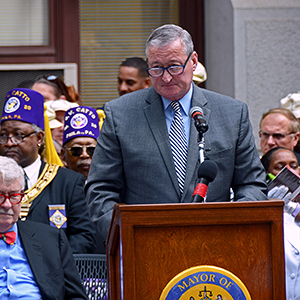 And few people were happier than Mayor Jim Kenney. As a city councilman 15 years ago, Kenney discovered Catto and thought he and his legacy deserved a monument.

Now that the monument exists, Catto will get his historical due, Kenney said.

“My hope is that someday, every child in Philadelphia will know as much about Octavius Valentine Catto as they do about Benjamin Franklin, George Washington and Martin Luther King,” he said. “Hopefully, all of us can be inspired by the courage and determination of O.V. Catto, who was willing to sacrifice his own life for liberty, for justice, and equality for all Americans.” 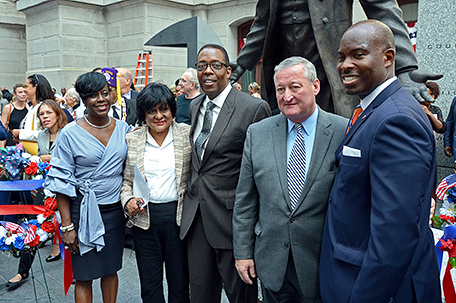 As he stood in front of the memorial to his ancestor with other members of the family, Jon Smith a great-nephew of O.V. Catto, hoped that this would lead to not only a better appreciation of his great uncle, but also his great-grandfather, William Catto, a civil rights leader in his own right. 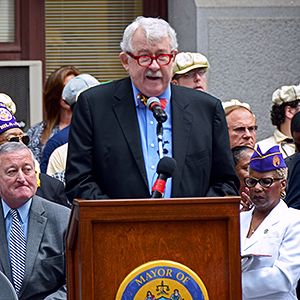 “It’s joy, but it’s also optimism,” Smith said. “This is an honor to those who have been left out of the history books. I love it. I think it’s amazing. It shows his power. It’s powerful and impactful.”

Impactful was exactly what sculptor Branly Cadet was going for. He was one of 10 artists vying for the honor when he was selected to create the memorial.

The significance of working on representations on these two historical figures wasn’t lost on him, Cadet said. But he had different hopes for both statues.

“I wanted the Catto statue to have a more open meaning,” he said. “I’d like for everyone to have their own interpretation.”

After the dedication, people took pictures in front of the monument. Ernest Dedmon of North Philadelphia, a past president of the O.V. Catto Elks Lodge, is excited about the educational prospects of the memorial.

“It’s an honor for our club to have this memorial here,” he said. “[Catto] was all that, but we never learned about him.”. 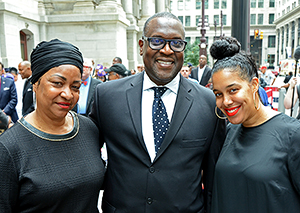 For Marion Haliburton, an alumnus of the Institute for Colored Youth, now Cheyney University, seeing a fellow alumni get this kind of honor was moving.

“Although he’s an historical figure, I still became very emotional.”

The monument may have been dedicated and given to the city, but the Catto Foundation’s work isn’t done, said Jim Straw, the fund’s president. The Foundation is developing educational programs designed to connect Philadelphians with the legacy of a man whose life created a blueprint for the modern Civil Rights Movement.

As she stood and looked at the monument, Jazelle Jones, the city’s Director of Operations for Special Events was glad that the dedication went well and that everyone got a chance to look at what could only be described as a labor of love.

While she attends events like this almost weekly, the Catto dedication was the only one that gave her goosebumps, Jones said.

It will also be the next field trip she takes with her grandchildren.

“I’m going to bring my grandkids to this monument, and tell them this man’s story,” Jones said.