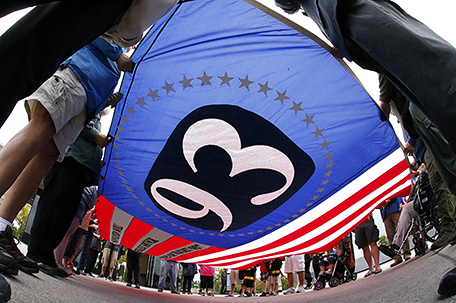 ABOVE PHOTO:  Visitors to the Flight 93 National Memorial in Shanksville, Pa., participate in a memorial service Thursday, Sept. 10, 2015, as the nation marks the 14th anniversary of the Sept. 11 attacks.  (AP Photo/Gene J. Puskar)

By Jonathan Lemire and Jennifer Peltz

NEW YORK — During years of going to ground zero every Sept. 11, Tom Acquaviva has seen crowds diminish at the ceremonies commemorating the terror attacks. But his determination to participate hasn’t.

“As long as I’m breathing, I’ll be here,” Acquaviva, 81, said Friday as he arrived to pay tribute to his late son, Paul.

More than 1,000 victims’ relatives, survivors and recovery workers marked the 14th anniversary at ground zero with grief, gratitude and appeals to keep the toll front of mind as years pass. “It’s a hard day. But it’s an important day. I’ll come every year that I can,” recovery worker Robert Matticola said.

But if the private ceremony is smaller than in its early years, the date also has become an occasion for the public to revisit ground zero, where the memorial plaza now opens to everyone on the anniversary.

Around the country, the date was marked with what has become a tradition of lowered flags, wreath-laying, bell-tolling and, in New York, reading the names of the nearly 3,000 people killed in the terror strikes at the World Trade Center, the Pentagon and a field near Shanksville, Pennsylvania. One woman at ground zero collapsed during the ceremony, apparently overcome by grief; bystanders helped her to her feet.

Family members praised first responders, thanked the armed forces and prayed for unity and security. They also sent personal messages to their lost loved ones.

“You are the reason that I wear this uniform and stand here today,” Air Force Technical Sgt. Sparkle Thompson said of her uncle, Louie Anthony Williams.

In Washington, President Barack Obama and first lady Michelle Obama stepped out of the White House for a moment of silence at 8:46 a.m., when the first of four hijacked planes hit on Sept. 11, 2001, striking the World Trade Center’s north tower. Later Friday, the president told troops at Fort Meade in Maryland that he hoped Sept. 11 would inspire thoughts of what binds the country together, while Vice President Joe Biden praised New Yorkers’ resilience in remarks to bikers and police officers taking part in a 9/11 memorial motorcycle ride.

The Flight 93 National Memorial near Shanksville marked the completion of its $26 million visitor center, which opened to the public Thursday. At the Pentagon, Defense Secretary Ash Carter and other officials joined in remembrances for victims’ relatives and Pentagon employees. Other observances were held around the country.

Some Americans honored the anniversary in their own ways.

“I don’t go to the memorial. I don’t watch it on TV. But I make sure, every year, I observe a moment of silence at 8:46,” electrician Jeff Doran said as he stood across the street from the trade center, where the signature, 1,776-foot One World Trade Center tower has opened since last Sept. 11.

The memorial plaza opened in 2011 but was closed to the public on the anniversary until last year, when an estimated 20,000 people flocked there to pay respects in the evening. Moved by the influx, organizers decided to open it more quickly after the ceremony this year.

Some victims’ relatives welcome the openness after years when the site was largely off-limits for construction. “It’s a little more comfortable for people to be here,” said Alexandria Perez, who lost her aunt, Ana Centeno.

But to Erick Jimenez, a brother of 9/11 victim Eliezer Jimenez Jr., “every year, it’s a little less personal,” though he still appreciates being with others who lost loved ones.

This year’s anniversary comes as Congress is weighing whether to start providing financing for the memorial plaza and whether to extend programs that promised billions of dollars in compensation and medical care to Sept. 11 responders and survivors. They’re set to expire next year.

“People are still dying because of what happened,” both on battlefields and from illnesses that some responders have developed after exposure to toxic dust, Army Sgt. Edwin Morales said as he arrived at ground zero in remembrance of a cousin, firefighter Ruben “Dave” Correa.

Jyothi Shah read names of victims in memory of her husband, Jayesh Shantitlal Shah, then paused with a message for the public.

“My kids and I would like to humbly thank everyone who has helped us, through the last 14 years, to be able to gently go through the sorrows, the suffering, the pain,” she said. “Thank you all very much – the city, the nation, the friends, the family.”