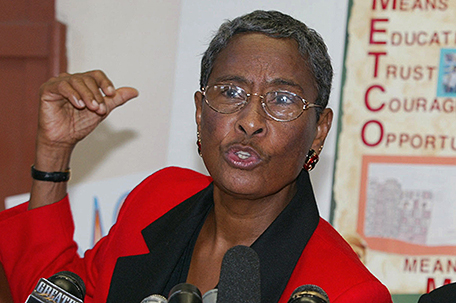 ABOVE PHOTO: Jean McGuire, then executive director of METCO, speak at a news conference, Tuesday, Oct. 7, 2003, in Boston. McGuire, a 91-year-old civil rights activist, was stabbed multiple times while walking her dog in a Boston park on Tuesday night Oct. 11, 2022, according to the Suffolk District Attorney’s office. (AP Photo/Julia Malakie, File)

BOSTON  — A 91-year-old education equity pioneer and civil rights activist who was stabbed while walking her dog in a Boston park released her first public statement last Friday since the attack, keeping the focus on her lifetime work of helping children.

“We as a community can never forget that we need to stand together and continue working to empower our children through learning,” Jean McGuire said in the statement released by her family. “We are at our best as a people; when it’s about ‘we’ not ‘me’. I love you all and I will see you soon.”

McGuire, the first Black woman to serve on the Boston School Committee, was stabbed multiple times in an apparently unprovoked attack in Franklin Park about 8:30 p.m. last Tuesday, authorities said. She remains in the hospital.

“The family of Jean McGuire would like to thank all of the doctors and dedicated health care workers who are assisting in her recovery,” the family said in the statement. “We greatly appreciate the outpouring of love and support that Jean has received from people in the Greater Boston area, across Massachusetts, and around the world. Jean has spent her entire professional life fighting for all families to have the best educational opportunities to achieve their dreams.”

The family added that they are in the process of establishing a nonprofit to help promote education throughout New England to support McGuire’s legacy.

The suspect has not yet been caught, but police say he might have been injured during the attack.

In addition to being the first Black woman on the school committee, where she served for a decade starting in 1981, McGuire in 1966 helped found METCO Inc., the Metropolitan Council for Educational Opportunity, which sends students of color from Boston to predominantly white suburban schools. She became the program’s executive director in 1973 and served in the position until 2016, according to a biography posted by Northeastern University’s John D. O’Bryant African American Institute.

She studied at Howard University and Boston State College and taught in a city school for two years before being named the first Black pupil adjustment counselor for Boston Public Schools.