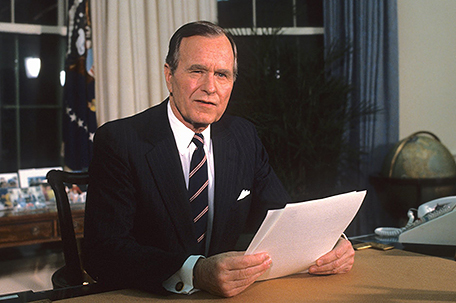 HOUSTON — George H.W. Bush played many prominent public roles in nearly a century of life, from when he was a 20-year-old World War II hero to the 41st president of the United States. In between came turns as a congressman, the director of the CIA, an ambassador to the United Nations and China, and a two-term vice president.

Yet colleagues and friends say the great-grandfather was humble, modest and unfailingly polite.

Bush, who died late Friday at his Houston home at age 94, would see his popularity as president soar after he assembled a U.S.-led military coalition that liberated the oil-rich nation of Kuwait from its invading neighbor Iraq in 1991 during the Gulf War. But just a year later, a deepening economic crisis at home would drive him from office when he lost his bid for re-election.

Still, the Republican would reinvent himself yet again by becoming an elder statesman admired by members of both major political parties. Bush, who died just eight months after the death of his wife of seven decades, Barbara, also saw his son George W. Bush twice elected as the nation’s 43rd president.

“George H. W. Bush was a man of the highest character and the best dad a son or daughter could ask for,” the younger Bush said in a statement Friday. “The entire Bush family is deeply grateful for #41’s life and love, for the compassion of those who have cared and prayed for Dad, and for the condolences of our friends and fellow citizens.”

Air Force One was sent to Texas transporting Bush’s casket to Washington, where his body lay in state at the Capitol Rotunda after the arrival ceremony Monday.

The son of a senator, Bush was the man with golden resume who rose through the political ranks, which also included becoming the Republican Party chairman before serving as vice president under the hugely popular Ronald Reagan.

But he acknowledged he had trouble articulating “the vision thing” during his time in office. He was also haunted by his decision to break a stern, solemn vow he made to voters when he accepted the Republican Party’s nomination for president in 1988: “Read my lips. No new taxes.”

He lost his bid for re-election to then-Arkansas Gov. Bill Clinton during a campaign in which businessman H. Ross Perot took almost 19 percent of the vote as an independent candidate. But with the election of son George W. Bush to the White House, they became only the second father-and-son chief executives, following John Adams and John Quincy Adams.

Out of office, Bush was content to remain largely on the sidelines except for an occasional speech or paid appearance and visits abroad. He backed Clinton on the North American Free Trade Agreement, which had its genesis during his own presidency. He visited the Middle East, where he was revered for his defense of Kuwait. And he returned to China, where he was welcomed as “an old friend” from his days as the U.S. ambassador there.

He later teamed with Clinton to raise tens of millions of dollars for victims of a 2004 tsunami in the Indian Ocean and Hurricane Katrina, which swamped New Orleans and the Gulf Coast in 2005. During their wide-ranging travels, the political odd couple grew close.

“Who would have thought that I would be working with Bill Clinton of all people?” he joked in October 2005.

As the years passed, his popularity rebounded with the growth of his reputation as a fundamentally decent and well-meaning leader who, although he was not a stirring orator or a dreamy visionary, was a steadfast humanitarian.

During his presidency, his greatest triumphs came with his handling of the first Gulf War and during a time when the Cold War was ending. After Iraq invaded Kuwait in August 1990, Bush quickly began building an international military coalition that included other Arab states. After liberating Kuwait, he rejected suggestions that the U.S. carry the offensive to Baghdad, choosing to end the hostilities a mere 100 hours after the start of the ground war.

“That wasn’t our objective,” he told The Associated Press in 2011 from his office just a few blocks from his Houston home. “The good thing about it is there was so much less loss of human life than had been predicted and indeed than we might have feared.”

But the decisive military defeat did not lead to the regime’s downfall, as many in the administration had hoped. Bush later acknowledged: “I miscalculated.” His legacy was dogged for years by that decision not to go into Baghdad and remove Iraqi leader Saddam Hussein from power. Hussein was eventually ousted in 2003, in the second Gulf War led by Bush’s son, and was followed by a long, bloody insurgency.

George H.W. Bush had entered the White House in 1989 with a reputation as a man of indecision and indeterminate views. One newsmagazine even suggested he was a “wimp.” But his work-hard, play-hard approach to the presidency initially won broad public approval: He held more news conferences in most months than Reagan, his predecessor, did in most years.

The Iraq crisis of 1990 to 1991 also brought out the skills Bush had honed in a quarter-century of politics and public service. After winning United Nations support and a green light from a reluctant Congress, he unleashed a punishing air war against Iraq and a five-day ground juggernaut that sent Iraqi forces reeling in disarray back to Baghdad. He basked in the biggest outpouring of patriotism and pride in America’s military since World War II, and his approval ratings soared to nearly 90 percent.

The other battles he fought as president, including a war on drugs and a crusade to make American children the best educated in the world, were not so decisively won.

An avid outdoorsman who took Theodore Roosevelt as a model, Bush sought to safeguard the environment and signed the first improvements to the Clean Air Act in more than a decade. It was activism with a Republican cast, allowing polluters to buy others’ clean-air credits and giving industry flexibility on how to meet tougher goals on smog.

He also signed the landmark Americans with Disabilities Act to ban workplace discrimination against people with disabilities and require improved access to public places and transportation.

Bush rode into office pledging to make the United States a “kinder, gentler” nation and calling on Americans to volunteer their time for good causes — an effort he said would create “a thousand points of light.”

But it was Bush’s violation of a different pledge — the no-new-taxes promise — that helped sink his bid for a second term. He abandoned the idea in his second year, cutting a deficit-reduction deal that angered many congressional Republicans and contributed to GOP losses in the 1990 midterm elections.

Bush failed to rein in the deficit, which had tripled to $3 trillion under Reagan and galloped ahead by as much as $300 billion a year under Bush. Seven years of economic growth ended in mid-1990, just as the Gulf crisis began to unfold. Bush insisted the recession would be “short and shallow,” and lawmakers did not even try to pass a jobs bill or other relief measures.

“I lost in ’92 because people still thought the economy was in the tank, that I was out of touch and I didn’t understand that,” he said in an AP interview shortly before the dedication of his presidential library in 1997. “The economy wasn’t in the tank, and I wasn’t out of touch, but I lost. I couldn’t get through this hue and cry for ‘change, change, change’ and ‘The economy is horrible, still in recession.’

George Herbert Walker Bush was born June 12, 1924, in Milton, Massachusetts, into the New England elite, a world of prep schools, mansions and servants seemingly untouched by the Great Depression.

His father, Prescott Bush, the son of an Ohio steel magnate, made his fortune as an investment banker and later served 10 years as a senator from Connecticut.

George H.W. Bush enlisted in the Navy on his 18th birthday in 1942, right out of prep school. He returned home to marry his 19-year-old sweetheart, Barbara Pierce, daughter of the publisher of McCall’s magazine, in January 1945. They were the longest-married presidential couple in U.S. history. She died on April 17, 2018.

One of the youngest pilots in the Navy, he flew 58 missions off the carrier USS San Jacinto.

In politics, he showed the same commitment he displayed in business, advancing his career through loyalty and subservience.

He was elected to Congress in 1966 and served two terms. President Richard Nixon appointed him ambassador to the United Nations, and after the 1972 election, named him chairman of the Republican National Committee. Later he would serve as ambassador to China and head of the CIA.

He made his first bid for president in 1980. Although he won the early Iowa caucuses, Reagan went on to win the nomination and select him as his vice-presidential running mate.

He became the patriarch of one of the nation’s most prominent political families. In addition to George W. becoming president, another son, Jeb, was elected Florida governor in 1998 and made an unsuccessful run for the GOP presidential nomination in 2016.

The other Bush children are sons Neil and Marvin and daughter Dorothy Bush LeBlond. Another daughter, Robin, died of leukemia in 1953, a few weeks before her fourth birthday.