Wine and waterfalls in the Columbia River Gorge 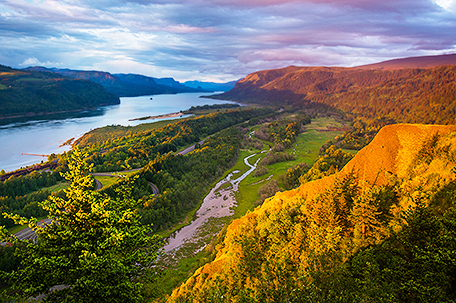 HOOD RIVER, ORE. –The Columbia River Gorge is a marvel of nature known for spectacular waterfalls, scenery and hiking. But it’s also famous in the world of wine.

The region’s geology has given rise to a wine industry that’s growing in both number and reputation, with more than 40 wineries within a 40-mile stretch. In 2004, the Columbia Gorge was designated an American Viticultural Area, a wine grape region distinguished by geographic features.

Here’s a look at the gorge, the wine region and wineries, along with what visitors need to know about the wildfire that made headlines last year.

The Gorge, the Falls and the Fire

The gorge is an 80-mile-long canyon with dozens of waterfalls spilling down towering cliffs. The most famous is Multnomah Falls, 620 feet high.

The Columbia River cuts through the gorge on its way to the Pacific Ocean, forming the boundary between Oregon and Washington through the Cascade Range mountains north of Mount Hood and past heavily forested hillsides and huge boulders.

Interstate 84 on the Oregon side of the river and Highway 14 on the Washington side offer easy access to trailheads, viewpoints and rugged parks. The windy gorge is also a favorite spot for wind- and kite-surfers.

A wildfire burned more than 20,000 acres of the gorge last fall. But little evidence of it can be seen from the road, aside from a very few scorched trees cut down just east of Multnomah Falls. The lower viewing platform at the falls has reopened, though the trail to the upper platform remains closed. Elsewhere, Horsetail and Wahkeena Falls are also closed and not expected to reopen until at least this summer, but others like Latourell Falls are open. An updated list of the status of hiking trails and recreational areas can be found here:https://www.fs.usda.gov/recmain/crgnsa/recreation.

Many of the wineries are clustered around Hood River, an hour east of Portland. Wine tasting in the region is a relaxing contrast to the Willamette Valley south of Portland, where traffic and crowded tasting rooms can detract from the experience. Tasting fees are comparable, $10-$15 per person.

Wine tasting was our mission one day while in Portland for a reunion show by my husband Rick’s rock band. We rented a party bus and filled it with 16 people , college buddies from around the country and local friends and family.

With a soundtrack of classic garage rock, we headed across the Columbia and east on Highway 14, past Wind Mountain, Dog Mountain , known for its spring wildflowers, and Beacon Rock State Park. We saw the Bonneville Dam, which generates enough electricity to power half a million homes. We passed the Bridge of the Gods, a steel truss cantilever bridge that leads to Cascade Locks, Oregon.

Nearby Stevenson, Washington, is home to Skamania Lodge, a resort that features 254 guest rooms, two restaurants, a golf course, an outdoor zip line and aerial park, and onsite hiking trails. Stevenson also offers many restaurants and watering holes, such as the Walking Man Brewery, to those just passing through.

Deeper into the gorge, we passed through White Salmon, Washington, a popular spot for whitewater rafting and kayaking on the White Salmon River. Whimsical street art and restaurants line its tiny main street, including the Everybody’s Brewing pub, with an outside deck and a view of Mount Hood across the river in Oregon. 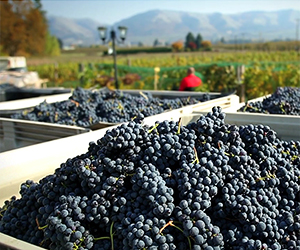 At COR Cellars, in Lyle, Washington, we were treated to a lovely view of Mount Hood. The winery, founded in 2003 by Luke Bradford, produces 10 wines just west of the boundary between the Columbia Gorge and Columbia Valley AVAs, and uses grapes from both regions.

COR has won acclaim for its cabernet franc, malbec, cabernet franc rose and Alba white, a blend of gewurztraminer and pinot gris. We especially liked the 2015 cab franc. Picnicking is welcome in the courtyard garden.

Next, we headed back west and crossed the Columbia to Hood River for lunch. The town has a huge beer scene, Full Sail, pFriem and Double Mountain among the breweries , but that tour would have to wait for another day. We settled in at Solstice Wood Fire Cafe and sampled some unusual and delicious pizzas, including a cherry and chorizo pie and one made with local cremini mushrooms.

Of Hood River’s 15 wineries, we chose two: Viento Wines and Cathedral Ridge Winery. Viento’s winemaker, Rich Cushman, is a Hood River native who founded the winery in 2007. Viento sources most of its grapes from several area vineyards, but the winery grows its own riesling in a vineyard planted by Cushman in 1981.

Viento has earned high marks for its Verona, a blend of pinot gris, chardonnay and sauvignon blanc, and for its syrah and sangiovese. We thought the 2014 pinot noir was delicious.

Of the three wineries, Cathedral Ridge had the largest selection, including several reserve wine options. The winery has won numerous awards, primarily for its reds. Winemaker Michael Sebastiani hails from the famous California winemaking family.

Heading back to Portland, we uncorked a couple of bottles and vowed to return soon to explore more of the gorgeous gorge and its wineries.

Warm up Fall meals with wine