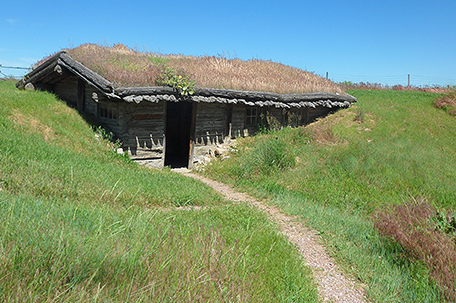 ABOVE PHOTO:  Museum of the Fur Trade Trading Post

“Our hearts will greet the smiling sun, And bless the heavenly rain; And hope, now dead, will come to life, When spring is here again.”

The settlement of O’Linn was established in 1884 with the express purpose of benefiting from a promised railroad spur. At the last minute the railroad chose a different location for the town, a place called Bordeaux. The residents, refusing to be deterred, moved the town, including the structures, to Bordeaux. They renamed the town Chadron, after Louis B. Chartran, a fur trader whose trading post was constructed on Bordeaux Creek in 1833. www.chadron-nebraska.com

Native Americans hunted and set up nomadic camps in the area for centuries and in the beginning of the 1800s the Sioux took up permanent residence. Contrary to popular belief the earliest traders in the region were the Spanish, not the French, who it is believed came north from New Mexico. Lewis and Clark were met by Native Americans already in possession of Spanish trade goods such as textiles, tools, weapons and ornamental objects. Chadron, because of its history of fur trading, is the best place to gain an in-depth understanding of the trade and its regional, national and international impact. The trade was responsible for the first American first multi-millionaire and the first American business.

I cannot recommend the Museum of the Fur Trade highly enough.  Situated in the only hilly, forested area in the state, this world-class gem has a collection of artifacts beyond price, all on the original site of an American Fur Company trading post and warehouse. After 43-years of operation the government closed the post because of ammunition sales to Native Americans. The museum opened on the grounds in 1949 and the sod trading post was reconstructed in 1956 and a Spanish Colonial-style addition inspired by Mission San Francisco de Solana was added in 1955. It is architecturally notable for its long red roof, clerestory windows and Douglas fir beams.

Interior exhibit tours begin with a 10-minute film, “When Skins Were Money,” and proceed into the exhibition galleries. The museum’s holdings include the largest collection of trade textiles, the single largest silver trade item in the world and the largest and most extensive collection of trade guns. Highlights of the collection are numerous but visitors must not miss the exhibited cloth samples sent back for duplication after William Clark discovered that the natives favored those patterns, Kit Carson’s double-barreled shotgun and a phenomenal display of trade blankets including the earliest extant “point” blanket.

A short, circular, outdoor trail takes you to the Warehouse, Trading Post, Trade Room, Living Quarters, Robe Press Indian Garden and “Red Top” Tipi. The post sits on its original foundations and is meticulously replicated based on the accounts of two brothers who visited the original. The reproduction is so well done that it is listed on the National Register of Historic Places, an extraordinary honor for a reconstruction. The museum shop offers literature and unique new items as well as artifacts and antiques. www.furtrade.org

Chadron State College is the home of the Mari Sandoz Heritage Center. The center opened in 2002 to preserve and present the life and works of author Mari Sandoz and to study the culture and ecology of the High Plains. A series of galleries on the first floor are dedicated to Ms. Sandoz, her life in the Sandhills and her novels that incorporated characters, settings and stories that she knew. Her novel with which most people are familiar is “Cheyenne Autumn.”

The lower level C.F. Coffee Gallery provides a sound overview of the cattle ranching heritage of the region. www.sandozcenter.com

One thing you must know by now is that Nebraska is filled with trails that mark the movements of various groups throughout American history, however, one of my favorite trails, “The Fossil Freeway,” is not as well known as many of the others. Western Nebraska’s fossil sites predate all the others, by thousands of years, and somehow I feel they have just been waiting for discovery. www.fossilfreeway.net

Hudson-Meng archaeological site is thrilling. It was discovered in 1954 by ranchers Bill Hudson and Albert Meng but excavations did not take place until 21-years later. Hudson-Meng has been designated a kill site, a location where Paleo-Indians trapped and killed game. In this case more than 600 bison’s bones, all now extinct species, were uncovered as well as artifacts from 2 distinct cultures. No one can conclusively state how the bison were killed because the bones show minimal evidence of having been butchered. Some archeologists theorize that they died of natural causes and humans occupied the area shortly thereafter. The bones have been dated to 10,000-years ago. The Hudson-Meng Education and Research Center allows you to view the excavation within an enclosure. The site offers guided tours, activities and interpretive information.

Toadstool Geologic Park has a breathtaking, though harsh, terrain. The first French trappers in the area called it “les mauvaises terres à traverser,” “the bad lands to cross.” Toadstool features configurations formed 38 to 24-million years ago from ash, clay and sandstone. There is a 1-mile interpretive trail with markers and picnic locations. Fossil tracks found at Toadstool include entelodonts, miniature horses and forbearers of camels, cats and dogs.

The fossil remains in Agate Fossil Beds National Monument were uncovered at the end of the 19th-century and excavated in 1904 and 1905. About 19-20-million years ago Western Nebraska was in the throes of a drought. Numerous animals made there way to shallow waterholes, died there and were eventually buried by sand and volcanic ash. The remains at this site include the Moropus, Parahippus, scavenger pig, small rhinoceros, Stenomylus and the burrowing Palaeocaster. Native Americans were aware of the fossils and considered them of spiritual importance. This is considered one of the most significant paleontological sites in the world.

The Visitor Center houses two museums and a large diorama of a prehistoric watering hole. James Cook, a personal friend of Red Cloud of the Oglala Lakota, owned Agate Ranch in the late 1800s. Red Cloud and his family traveled to the ranch from the reservation to visit, dance and hunt. They gifted Cook with more than 500 artifacts and Red Cloud entrusted his friend with the safekeeping of many of his personal and ceremonial objects. They are displayed as the James H. Cook Collection. Highlights of the collection are a portrait of Red Cloud his wife’s dress, Crazy Horse’s whetstone and a pair of moccasins beautifully beaded even on the soles.

During the summer an exterior exhibit, “The Tipis of Agate,” is in front of the center. One is a Crow-style tipi and the second, smaller, Sioux tipi. The 2.7-mile Fossil Hills Trail is paved and filled with markers that identify the flora and fauna. There are 8 trail stops including an ancient water hole and the historic excavation sites. www.nps.gov/agfo

Scotts Bluff National Monument is deeply entwined with all of the state’s history. The 3,000-acre park is listed as a stop on the Fossil Freeway because of fossil discoveries found at the site that date back millions of years. The monolithic monument, on the north side of Mitchell Pass, stands 800-ft. and dates from 33-million years at the lower elevations (siltstone) to 22-million at the Cap Rock. The middle layers are volcanic ash and sandstone. Early on Mitchell Pass was too difficult for emigrants but after 1851 it became the main route through the area. www.visitscottsbluff.com

Native Americans called it “Ma-a-pa-te,” “hill that is hard to go around.” Legend has it that a fur trader for the Rocky Mountain Fur Company, Hiram Scott, was wounded and died near there and the bluff was given his name. It is documented that travelers used the bluff as a landmark as early as 1812.

The Oregon Trail Museum and Visitor Center was built in 1936 with additions in 1937 and 1938. After a 12-minute video visitors tour the three galleries. The exhibition highlights are artworks and photographs by William Henry Jackson.

Immediately outside of the center is a short trail where wagon trains and a Mormon cart are displayed and used as interpretive tools and a hiking trail, a driving route and free summer shuttle are available to take you to the summit. The views are incomparable. www.nps.gov/scbl

Courthouse and Jail Rocks were the first in a series of natural formations used as guides and landmarks that extended 40-miles. They soar 250-ft. above Pumpkin Creek. Courthouse Rock was so named because it was said to look like the new courthouse in St. Louis. www.nps.gov/oreg/planyourvisit/site6.htm

The Nebraska Historical Society owns Chimney Rock National Historic Site and it is the most photographed and documented of the natural landmarks. This 5-million year old “chimney-like projection of rock on top of a conical base” can be seen from 37-miles and 2-days away. Based on the number of references in journals, diaries, and reminiscences, it was the most frequently noted, the most voluminously described, and the most renowned of all the Oregon Trail landmarks. When it was sighted travelers knew they had completed 1/3 of their journey and that the most arduous portion of the trip was yet to come.

Chimney Rock is 325-ft. in height and 1/2-mile in circumference at the base. Native Americans named it after an adult male’s appendage but early travelers compared it to something they were familiar with. Composed of soft Brule Clay, emigrants were known to carve their names on the formation. In 1956 it was designated a National Historic Site.

The Ethel and Christopher Abbott Visitor Center features an orientation film that relates the story of the Oregon Trail and the history of Chimney Rock. Displays include early drawings and photographs, interactive stations and a portico that offers an excellent view of the formation.

Rosita’s Restaurant in Scottsbluff serves traditional Mexican cuisine made from scratch. The décor is warm, welcoming and reminiscent of a cantina. It has been named one of the country’s top 100 restaurants and is the only one so designated in the state. It is a great place to reflect on all the wonders of Nebraska.

Rediscover America’s western roots in Western Nebraska. It is affordable and unique at every turn. www.visitnebraska.com

Children ages 6-12, and an accompanying chaperone, spend the night exploring Egypt through a series of games and hands-on activities. Nine dates are available, between November and June 2016, and because of the popularity of this special event it is important to register now. Complete information, dates and registration details are available at www.penn.museum/kids-and-family/40-winks-with-the-sphinx.html

On August 26, 1814 the small town of Brookville, 18-miles north of Washington D.C., became the United States Capital for one day. On Saturday, August 30, from 10 am- 7 pm and Sunday, August 31 from 12 noon- 6 pm, a series of War of 1812 Bicentennial Commemorative events will take place in the Brookville Historic District. The town became a place of refuge for citizens when British invasion was eminent and, once the British invaded, President Madison and his mounted guard arrived. The event is free and open to the public and includes re-enactments, music, dance demonstrations and other immersive activities. www.uscapitalforaday.org

A Day Out with Thomas: The Thrill of the Ride Tour 2014 will make its first stop at the Historic Strasburg Rail Road and this year for the first time the life-sized Thomas the Tank Engine will talk to his fans and will be joined by Percy. These stars of the Thomas & Friends® series will be joined by Sir Topham Hatt®, Controller of the Railway, who will participate in activities including arts and crafts, rides on vintage Pump Cars, hand-propelled Cranky Cars and a Pint-Sized Pufferbelly train, storytelling a special 25-minute ride with Thomas the Tank Engine. Events will take place from September 13 – 21, 2014. Tickets are now on sale. Information is available at www.strasburgrailroad.com/train-schedule/events/day-out-with-thomas and www.thomasandfriends.com