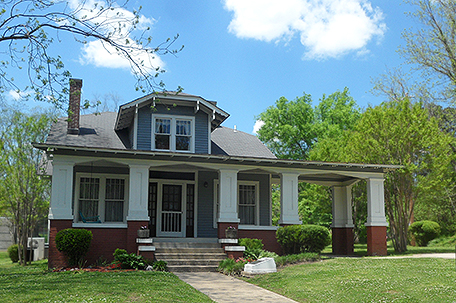 “My music had roots which I’d dug up from my own childhood, musical roots buried in the darkest soil.”

Haywood County lies at the heart of West Tennessee’s Delta and the earliest inhabitants were Native American. Settlers from Virginia and the Carolinas followed after the Indian lands were divided in 1823. In 1824, the county was named after Judge John Haywood, a Tennessee Supreme Court judge. www.brownsvillehaywoodcounty.com

Brownsville was named in honor of Gen. Jacob Brown, a Pennsylvania hero of the War of 1812 and was named the Haywood County seat. The city is both historically and architecturally significant. Of particular note is the 1882 Gothic Revival Temple Adas Israel, the oldest synagogue in the state, placed on the National Register of Historic Places in 1979.

Tennessee was always an agricultural state, but cotton was the main cash crop of West Tennessee after its introduction in the region because of the rich fertile soil and the availability of black labor. The cotton grown was of a high grade with a long staple and just prior to the Civil War Tennessee was the fifth-largest cotton producing state in the country. The earliest documented instance of slavery was that of one slave named Abraham in the 1750s. By 1861, there were more than 275,000 enslaved workers in the state.

The exploitive sharecropping system, comprised overwhelmingly of poor blacks, took the place of slavery. The people of West Tennessee remained rural and an outgrowth of their insularity was a vibrant culture that developed unique genres of music that would characterize American culture internationally.

A stop at the West Tennessee Delta Heritage Center is mandatory for a quick and comprehensive crash course on the culture of the rural Tennessee Delta. The center’s complex houses three distinct museum rooms under one roof, the Cotton Museum, the Hatchie River Museum, the Music Museum and two outdoor displays. The Cotton Museum relates the history of cotton in the region through displays, artifacts and photographs.

The importance of the Hatchie River is featured in a museum gallery with dioramas and three fresh water aquariums. The Hatchie, the last wild river in the Mississippi System, offers hunting, fishing and hiking opportunities and has 11 species of catfish and 250 bird species.

Sleepy John Estes, Alex Haley, Hammie Nixon, Denise LaSalle, Carl Perkins, Elvis and Tina Turner are prominently showcased in the Music Museum. Highlighted displays include a large mural of seminal blues musicians, showcases of artist’s personal effects and the soundtrack that accompanies you as you tour the gallery. Your visit extends to two phenomenal exterior displays.

Sleepy John Estes’ cabin his final home, is on the property. Estes was a blues guitarist who was born to sharecroppers who was discovered on a street corner and made his first recording in the Peabody Hotel. He became famous for his “sob” that became known as “crying the blues.” He died in Brownsville on June 5, 1977. The cabin is open for self-guided tours and concerts are held on Estes’ porch during the summer.

In March of 2013, Vogue Magazine hit the newsstands and at 73, Tina Turner became the oldest, most gorgeous woman to grace its cover. The photo shoot and interview show that Anna Mae Bullock has come a long way from Nutbush, Tennessee.  A truly wonderful aspect of her story is that she has not forgotten where she came from. The 1889 Flagg Grove School, her childhood school, is situated on the campus of the West Tennessee Delta Heritage Center. The school was moved there in 2012 and is scheduled to open September 26-27, 2014 during Tina Turner Heritage Days, after a loving and extensive renovation. Turner has contributed both financially and by donating memorabilia. Personal staff members, including her designer, have been instrumental in crafting the displays. Turner’s great uncle, a former slave named Benjamin Flagg, sold the land to the community for the school. The school will interpret the African American rural school experience. www.tinaturnerheritagedays.com

The gift shop has a wide selection of handcrafted items and Tennessee souvenirs. Admission to the Center and outdoor exhibits is free. It is open daily. www.westtnheritage.com

Helen’s Bar-B-Q is one of Brownsville’s most iconic sites. Helen Turner, one of the country’s few female pitmasters, has been presiding over the restaurant since 1996. She was deemed “Queen of Barbecue” in Charleston and is the only female in the “Top 10 Southern Pitmasters.” Two of her additional signature dishes are barbecued bologna and banana pudding. Helen’s is a favorite stop for visiting musicians. 1016 N. Washington Ave.

In 1977, Alex Haley’s novel, Roots aired as an ABC television miniseries, “Roots: The Saga of an American Family.” It was shown over eight nights and the final episode is still the third most watched miniseries in television history. Alex Haley’s “Roots” won nine Emmy Awards, began a national conversation on the slavery experience and ignited a desire for many people to begin genealogical study that has grown overwhelmingly since that time.

Haley’s journey to learn the multigenerational story of his family, beginning in Africa, originated on the front porch of his maternal grandparents in Henning, Tennessee. Will Palmer, Haley’s grandfather, constructed the 10-room Palmer House in 1918-19 and Alex lived there from 1921-29 and many summers afterwards. It was on the front porch that the family would gather and he heard tales of Kunta Kinte and Chicken George. His resulting novel was published in 1976 and eventually translated into 37 languages.

Tours begin in the 2008, 6500-sq. ft., Alex Haley Interpretive Center. A 14-minute orientation film is shown and a self-guided museum tour is offered. Featured items on display are Haley’s director’s chair, a cast photo, artifacts from his journey to Africa and Chicken George’s hat. An adjacent showcase houses a first edition of Haley’s “Autobiography of Malcolm X.” Genealogy classes are held in the Center monthly.

The Palmer House is located a short walk from the Center. Guided visits begin in the bedroom and proceed through the house. The home is furnished with family antiques and is filled with pictures of family members. The front porch is original. The home was added to the National Register of Historic Places in 1978.

Alex Haley’s gravesite is on the lawn of the home. Originally it was marked with a simple stone but was replaced with a more elaborate gravestone. There are two errors on the tombstone. Chicken George and other members of Haley’s family are interred in nearby Bethlehem Cemetery. www.alexhaleymuseum.org

Trenton, once known as Gibson Port, was incorporated in 1847.  Currently the world’s largest collection of rare porcelain veilleuses-theieres, commonly referred to as teapots, is showcased in the Municipal Building in Trenton, Tennessee. The more than 500 objects date from 1750 to 1860 with the earliest example being a plain bowl on a stand used in sickrooms and nurseries. Either oil or a candle lighted the stand. Later, a teapot replaced the bowl and they were commonly used as a nightlight and to warm medications for patients. Dr. Frederick Freed’s 35-year collection was donated to Trenton and it is the both the largest and the only collection of its kind in the world. The Metropolitan Museum of Art expressed interest in the collection but they would not commit to display all of the teapots in a single display. The objects range from simple clay to ornate porcelain with complicated designs. A highlight of the display is a teapot belonging to Napoleon. The collection is on view 24-hours a day and there is no admission fee. If you visit late in the evening you can obtain the key from the police department stationed in the Municipal Building. Trenton’s Teapot Festival is held annually in May. www.teapotcollection.com

While visiting the city, note the 31 mph speed limit, the only one in the country. www.trentontn.net

Denmark is the oldest town in West Tennessee.  It was established, after an Indian Treaty was signed, on what had been an Indian trail. The town was named after the Chickasaw,” den mark,” referring to the numerous animal dens in the area. During the 1860s it was the largest city in the region. Currently the population is seven. www.trentontn.net

The 1854 Georgian Denmark Presbyterian Church began as a log cabin. The second church was constructed over a six-day period using slave labor for a congregation that dated from 1820. The church was fully restored over a five-year period, using as many original materials as possible, and reopened in 2013. The white wooden church contains original pews and windows. The second-floor of the church served as Masonic Hall #154 and a prison holding 97 inmates during the Civil War. The first internment in the nearby cemetery took place in 1824.  Denmark Presbyterian was added to the National Register of Historic Places in 1983.

Oral history relates several interesting, unverifiable, stories. The most often told is the story of a Sunday when Confederate soldiers attended the service. An area Union supporter burst into the service hoping to expose the soldiers. The Confederates heard of his coming and hid beneath the ladies’ hoop skirts.

The church has been the scene of several supposed hauntings. The most often reported events are cases of the church being illuminated when it is empty and the sound of a choir singing. www.bigblackcreekhistorical.com

Our journey to experience America’s stories and hear her soundtrack will continue in Jackson, Tennessee next week. www.tnvacation.com

On May 24, 1861, Union Major General Benjamin Butler, stationed at Hampton, Virginia’s Fort Monroe, declared that Confederate slaves were to be treated as contraband of war and as such there was no legal compulsion to return them to their owners. This led directly to an influx of slaves to the area for the protection of the army. Many of them were settled in the Grand Contraband Camp between Pembroke and Lincoln Streets. The Hampton History Museum is conducting a hand archeological dig from May 21st until June 13th. Docent-led tours of the site will take place on Thursdays and Fridays from June 12, 29.  Tours of the excavation will depart from the History Museum at 2:30 PM and will include St John’s Cemetery and the museum exhibit, “Toward Freedom: Hampton and the Contraband.” This is a significant exhibit and an opportunity to immerse yourself in emerging history. www.hamptonhistorymuseum.org

Penn Museum will inaugurate its fifth season of Summer Nights Concerts on Wednesday, June 18, 2014. from 5-8 PM.
The concerts of global music are sponsored by Dogfish Head Brewery and will take place in the outdoor Stoner Courtyard. Admission costs and the complete schedule can be found online. www.penn.museum/press-releases/951-summer-nights-2013