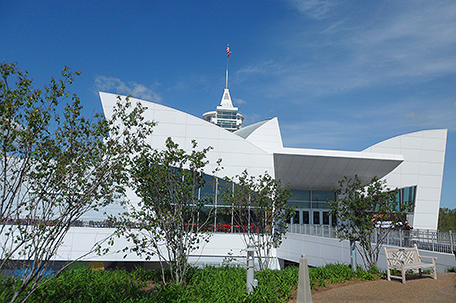 ABOVE PHOTO:  Discovery Park of America

“Be a misfit. Many of the world’s great accomplishments were made by misfits. Not to fit is okay.”

Jackson, like most of West Tennessee, was part of Chickasaw territory until a treaty opened the area for settlement in 1818. The city, originally named Alexandria, was located on 30-acres on the shores of the Forked Deer River four years later. They renamed the town Jackson after Andrew Jackson the same year and Jackson became the county seat. www.jacksontn.com

David Stern Crockett, he disliked “Davy,” was not born in Jackson but spent part of his political career there. Though he is best remembered as the “King of the Wild Frontier,” he served as both a US senator and state assemblyman. He did often outfit himself in buckskin and a coonskin hat but it is believed that he may have worn those items for public relations. In 1835 Congressman Crockett lost his bid for a fourth term and on the steps of Jackson’s Madison County Courthouse he angrily addressed the crowd and stated, “The rest of you can go to hell, for I am going to Texas.” He died the following year at the Alamo.

During the Civil War a number of minor engagements took place in the area, the most significant being the Battle of Britton Lane in September of 1862. The Confederate goal was to prevent the Union troops from providing reinforcements in another area and they achieved this goal. The battle is considered a Union victory however the Confederates captured a large number of Union prisoners. A mass Confederate gravesite and field hospital are on the battlefield tour. www.brittonlane1862.madison.tn.us

Rock n’ roll melded with hillbilly music in the 1950s and created a new genre, rock-a-billy, and its origins are in Jackson. The International Rock-a-Billy Hall of Fame and Museum (RHF) was created to recognize, promote and honor the pioneers of the music and provide a glimpse into their personal lives. Their stories are told through rare and unique memorabilia, photographs and the stories of the RHF President, Henry Harrison, who knew and interacted with them all.

The two-gallery tour begins in a display gallery largely dedicated to the life and legacy of Elvis. Featured here are early photographs, album covers and, a gem of the collection, the actual defibulator and paddles used on Elvis at the hospital on the night he died. Emphasis is placed on the fact that rock-a-billy was basically music born out of poverty and it was a route out of the very conditions that sparked that creativity. Johnny Cash and Carl Perkins, a Jacksonian, are also showcased here. Life-sized portraits of those inducted into the Hall of Fame adorn one wall of the second gallery and here visitors can listen to oral interviews of the entertainers. Wanda Jackson, via a recorded interview, personally informs you that she first heard the term “rockabilly” in 1955.

The portion of the Tennessee Music Highway, I-45, that runs through Jackson is known as the Rockabilly Highway. It includes the RHF and five other significant sites. Isaac Tigrett , co-founder of the Hard Rock Café, was born and raised in Jackson where he opened the first American Hard Rock. A marker to African American bluesman Sonny Boy Williamson is situated on Highway 18. He is credited with being the first artist to play the harmonica as a lead instrument. www.tnmusichighway.com

There isn’t anyone who has ever seen a movie or tuned into a television program that won’t be absolutely thrilled with a visit to Rusty’s TV & Movie Car Museum. The museum exhibits 28 of the more than 50 entertainment-related cars in the collection. The majority are the authentic vehicles used in filming. The cars are displayed in dioramas that include a mix of music, figures, photographs and videos. Tours are self-guided and every vehicle provides a photo-op and a trip down memory lane. You will recognize the museum immediately because “Christine” the 1958 red Plymouth Fury from the movie is on display outside.

The cars showcased inside include Paul Walker’s car from the first Fast and the Furious, the 1989 Batmobile from Michael Keaton’s Batman, the 600-mph car from Death Race, complete with operational machine guns, Tarantino’s 1970 Nova from Death Proof, the “Beverly Hillbillies” truck, the “Munster’s” car made from a real coffin and the “Dukes of Hazzard” General Lee and “Scooby Do’s”  Mystery Machine. With all those to choose from, visitors both international and local opt most often to have their pictures taken with the 21-ft. long, 7,500-lb Ghostbusters car and the 1974 Dodge made famous in the Blues Brothers. I must add that visitors also love to photograph Ricky Bobby’s underpants from Talladega Nights. Do not miss this attraction when in town. www.rustystvandmoviecars.com

During the Civil War, Jackson was occupied by Federal troops for the majority of the war because of its importance as a railroad hub. The state’s railroads were strategically significant because they constituted 13 percent of the South’s rail network and their lines connected North and South. Probably the most famous railroad conductor in the country is Casey Jones and visitors can immerse themselves in railroad history, Jones’ story and great southern music hospitality and cuisine in the Casey Jones Village. The Village is one of Tennessee’s top travel attractions because it has something for everyone. The complex includes Casey Jones Home and Railroad Museum, Brooks Shaw’s Old Country Store Restaurant, the Shoppes at Casey Jones Village, the 1837 antebellum Providence House, a chapel and weekly gatherings of musicians on the store’s “front porch.” Brooks Shaw began it In 1965 as an antique store and it blossomed into a West Tennessee village that continues to be family owned and operated.

The restaurant’s buffet is famous for both the excellence and number of dishes offered. If it is a West Tennessee dish, you can taste it at its best at Brooks Shaw’s. The restaurant offers three Southern buffets daily and is consistently voted Jackson’s best restaurant. Adjacent to the restaurant is a 1890s ice cream parlor and soda shoppe that has been rated one of the “Top 50 in the US” by USA Today.

A short walk takes you to the Railroad Museum and home of Casey Jones. The museum features early railroading artifacts, a display on Civil War railroads, a model train exhibit and personal items and memorabilia related to Jones. The items include his pocket watch and a large mural depicting the legendary crash. A replica of the 130-ton steam engine #382 is showcased in the rail yard and visitors are invited to climb aboard and even ring the bell.

Engineer Casey Jones departed Canton. Mississippi for Memphis On April 29th. At  3:52 AM on the morning of the 30th his train crashed headlong into another train. Jones heroically refused to abandon the train but stayed instead at his post applying the brake and ultimately saving the passengers. His final order was for his African American fireman, Slim Webb, to jump. Webb survived the wreck, attended Tulane University and died in 1957. More than 2,000 railroad men died in the 1900s but the story of Casey Jones stood out. Much of his fame can be attributed to another African American, Wallace Saunders, who set the story to music.

Jones’ original home was moved here in 1980. The 1860s house appears as it would have been when Jones and his family lived there in the 1890s. Tours are self-guided.  www.caseyjones.com

West Tennessee has its very own field of dreams, a 50-acre cornfield that is the location of Discovery Park of America (DPOA), the state’s newest attraction. The principal benefactor is the Robert & Jenny Kirkland Foundation. This amazing complex brings everything regional to life within a 100,000-sq, ft. center with 10 galleries and 13 exterior exhibit areas. Discovery Park provides both an excellent orientation to the region and a wonderful way to synthesize and reflect on everything you have experienced in the region. Discovery Park opened in 2013.

The $100,000 Discovery Center is a white structure that can be seen from a distance. The building and the 120-ft. observation tower appear other worldly as they blend into the landscape. Visitors cross a bridge to enter the center on the second level into an open atrium with a stunning view of dinosaur skeletons on the lower level and a 48-ft. tall model of a human skeleton incorporating a 38-ft. slide. Other highlights include a 4D earthquake simulator, interactive starship theater, an aquarium, a UH-34D helicopter that you can climb into and W.C. Fields limousine, the first equipped with a martini bar.

Exterior American, European and Japanese gardens feature 24,000 flowers, plants and trees and The Settlement showcases structures, including David Crockett’s Cabin, from the region’s early days. Liberty Hall is located in Freedom Square and has a replica of the Liberty Bell.

West Tennessee has it all including its very own soundtrack. Experience it! www.tnvacation.com

Philadelphia’s award-winning Rittenhouse Hotel is welcoming the summer season with a new, multimillion-dollar, look. A recent makeover has resulted in the opulent Park Suites with stunning views of Rittenhouse Square, the new, cozy, 30-seat Library Bar, and a stunning new Spa, Health Club and Salon, the largest in Philadelphia. The Rittenhouse Spa & Club will offer a complete palette of services and amenities including unique services for gentlemen. Special packages will be available. www.Rittenhousehotel.com

Spruce Street Harbor Park at the Penn’s Landing Marina will open on June 27th and run through August 31st. The waterfront will feature three floating barges, an urban beach, restaurant and bar, lily pad water garden, Harbor Boardwalk and Mist Walk. This is destined to become a summertime favorite. It is accessible to public transit and parking is available onsite. www.delawareriverwaterfront.com

Gettysburg, Pa. is renowned as a destination for Lincoln buffs and Civil War devotees and now golf aficionados can count their number among the group making their way to the region. There are five courses in the area, each with distinctive scenery and amenities and the Links at Gettysburg has been designated by Golf Digest one of the best places to play in the United States. Add Gettysburg to the shortlist of the places to visit this summer. www.destinationgettysburg.com

New York’s Grand Central Station is one of a limited number of train stations in the nation that is a tourist destination of itself. Visitors can tour the building, dine in one of 35 eateries and shop in all 68 stores in this elegant structure and from now until June 16th visitors can also participate in the Grand Central Rewards program. Shoppers spending a minimum of $50 in four Terminal shopping zones will earn special rewards and those spending a minimum of $250 will earn special edition items. Complete information is available online. www.grandcentralterminal.com/event/grand-central-rewards

The Fourth Annual African Landing Day Commemoration will take place on August 15th, 16th and 20th in Hampton, Virginia. A program of events in remembrance of the first Africans in the British colonies will include musical tributes, films, forums and memorial ceremonies. www.project1619.org or www.juneteenthjazz.com

Germany is the place to be this summer if you are a music lover. The country of Beethoven, Bach and Wagner presents music festivals, concerts and events designed to showcase music from classical to rock. Germany’s largest rock festival, Rock am Ring, is held in Eifel in June with a sister festival in July in Nuremberg. Germany’s Heavy Metal Festival will take place in Wacken July 31st to August 2nd. There are too many events to list but complete information is available on the web. www.germany.travel/presse