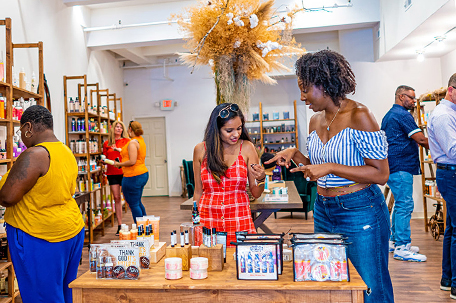 Black history and culture are a vital part of Philadelphia’s past, present and future.

And while the city recognizes and reflects on the role that Black people played — and continue to play — in the history of our nation all year long, Black History Month inspires even more celebration across the region.

During Black History Month in Philadelphia, residents and visitors reflect on the 150th anniversary of the 15th Amendment to the U.S. Constitution, which said that the right to vote could not be denied based on race; discuss the effects of gentrification in Philadelphia and enjoy a variety of concerts, exhibitions, workshops and more.

Read on for our guide on how to celebrate Black History Month in Philadelphia for 2020.

Note: Events in this article are arranged in chronological order.

The Philly POPS Present Aretha: Respect at the Kimmel Center

To honor the Queen of Soul, The Philly POPS features Broadway powerhouse Capathia Jenkins and R&B singer Ryan Shaw in a program that includes renditions of Bridge Over Troubled Water, Respect and Chain of Fools.

The Annenberg Center for the Performing Arts celebrates Black History Month with two incredible performances for 2020. In Intuition: Songs From The Minds Of Women, Alicia Olatuja — who performed at the 2013 presidential inauguration — makes her Philadelphia debut with songs from her new album (February 16, 2020). Four days later, artist Angélique Kidjo, who was dubbed “Africa’s premier diva” by Time Magazine, wows the crowd (February 20, 2020).

Where: Annenberg Center for the Performing Arts, 3680 Walnut Street

During this special program, The Library Company of Philadelphia showcases original documents related to Frederick Douglass’ abolition efforts. The collection includes broadsides and manuscripts as well as photos of the man who became known as the most photographed man of the 19th century.

Voices of Hope: A Black History Month Celebration at the Please Touch Museum

Where: Please Touch Museum, 4231 Avenue of the Republic

The Rosenbach’s seventh edition of Yolanda Wisher’s Rent Party — an event paying homage to the Harlem Renaissance tradition of artists and musicians throwing house parties to pay their rent — focuses on the lives of four African American poets who were part of the beat poetry movement of the 1940s and 1950s. The event features vocal and drum performances, Beat poetry classics and more.

Where: The Rosenbach, 2006 Delancey Place

At the Blockson Collection: A Conversation and Book Signing with Haki Madhubuti

On Friday, February 21, the Charles L. Blockson Afro-American Collection hosts a conversation and book signing with Haki Madhubuti, the National Endowment for the Arts-winning poet who founded the Third World Press — the oldest independent publisher of Black literature in the nation. The event is completely free.

Awakened in You: The Collection of Dr. Constance E. Clayton at the Pennsylvania Academy of the Fine Arts

At this new exhibit, the Pennsylvania Academy of the Fine Arts displays more than 75 works by African American artists from the collection of educator and arts advocate Dr. Constance E. Clayton. The collection features mostly paintings and works on paper, and also include sculptures by Richmond Barthé and Augusta Savage.

Where: Pennsylvania Academy of the Fine Arts, 118-128 N. Broad Street

The Eastern PA Conference of the United Methodist Church hosts a screening of the HBO documentary True Justice: Bryan Stevenson’s Fight for Equality, about Stevenson’s work to bring justice to wrongly convicted individuals. After the film, guests can join a panel discussion about race in regards to the criminal justice system.

Ladies Night Out: Comedy Tour at The Met Philadelphia

Head to The Met Philadelphia for a hilarious evening featuring some of the funniest Black women in America. NeNe Leakes hosts the event with guests Loni Love, Adele Givens, Sherri Shepherd, Kym Whitley and B Simone.

Jazz in the Planetarium at The Franklin Institute

Grab a cocktail, sit under the stars and enjoy live jazz courtesy of Arpeggio Jazz Ensemble at this new-for-2020 event inside The Franklin Institute’s Fels Planetarium. Derrick Pitts, chief astronomer at The Franklin Institute, joins the festivities by narrating a special version of The Sky Tonight, an interactive tour of the constellations and planets visible from the planetarium.

Philadelphia is rich in Black culture — and that includes an array of Black-owned and -operated restaurants, coffee shops and bars. Make a point to dine out at one (or more!) of the many Black-owned restaurants in the City of Brotherly Love, including Franny Lou’s Porch (shown above), 48th Street Grille, Aksum Cafe and more.

Philadelphia has a stellar array of Black-owned and -operated shops, boutiques and bookstores. Guests can visit Amalgam Comics and Coffee House, whose owner is the first Black woman on the East Coast to own a comic-book shop. Also, visitors and locals can shop made-to-measure suits at Damari Savile, grab the essentials at the city’s first boutique specializing in natural products for Black hair and skin at Marsh + Mane, or catch a yoga workshop after shopping accessories and clothing at The Sable Collective.