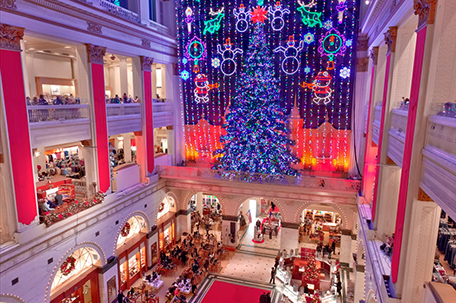 ABOVE PHOTO:  The Christmas Light Show and Wanamaker Organ Concert at Macy’s is a Philadelphia holiday tradition that dates back more than half a century.   (G. Widman for Visit Philadelphia)

Inexpensive ways to get in the holiday spirit

This holiday season, there are more ways than ever to ring in the most wonderful time of the year in Philadelphia — and a number of holiday attractions and events are completely free.

Some of the most iconic and popular Philadelphia holiday traditions — from holiday lighting celebrations and shows like the Macy’s Christmas Light Show and the Comcast Holiday Spectacular to major area events like the Thanksgiving Day Parade and the Mummer’s Parade — won’t set you back a dime.

Here’s our guide to free holiday fun in Philadelphia for 2016. 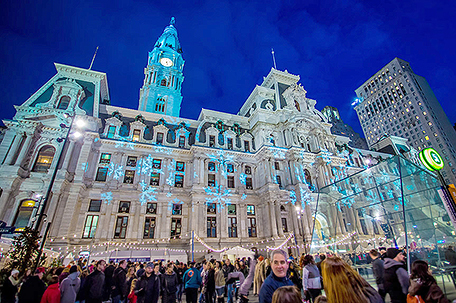 Dilworth Park hosts brand new attractions this season — and nearly all are free.

With more than a handful of attractions ranging from the classic German-style Christmas Village to a brand-new Wintergarden and Maze, there are more holiday happenings than ever this season right in the heart of the city. Nearly all are free to explore and filled with fun, making it easy to spend nearly a full day wandering around Dilworth Park and City Hall.

Visitors gather in front of the Comcast Experience video wall, one of the world’s highest resolution LED displays, to catch the magic of The Comcast Holiday Spectacular. Throughout the free 15-minute show, dancers from the Pennsylvania Ballet move to music from The Nutcracker, a magical sleigh floats over the Philadelphia countryside and a seasonal soundtrack fills the room. Shows run at the top of the hour from 10 a.m. – 8 p.m. (excluding 5 p.m. on weekdays).

A Philadelphia tradition since 1956, the Christmas Light Show at Macy’s in Center City illuminates the Grand Court inside the Wanamaker building, a National Historic Landmark. People of all ages delight in the 100,000 LED lights, narration by Julie Andrews and holiday music from the Wanamaker Organ. Free performances take place every two hours during store hours. Also, head to the third floor of Macy’s to experience the 6,000-square-foot Dickens Village, which brings Charles Dickens’ classic “A Christmas Carol” to life with more than 100 fully animated figures reenacting many of the story’s most memorable moments.

The holiday magic at Ben Franklin’s namesake park comes in the form of the Franklin Square Holiday Festival featuring the Electrical Spectacle Holiday Light Show presented by PECO. The show runs every 30 minutes from 4 to 8 p.m. on weeknights and 4 to 9 p.m. on Fridays and Saturdays. It showcases a giant lighted kite and 50,000 lights choreographed to holiday music. Other festivities include visits from Santa; rides on the holiday train and carousel; the brand-new Ben’s Bites & Brews, where guests can create and taste a variety of tasty treats; and mini-golf.

The holiday season shines bright in Philadelphia as neighborhoods are transformed by spectacular decorations. From the holiday lights at Boathouse Row (one of Philadelphia’s most memorable nighttime vistas) to the must-see elaborate house lights set up on the 1600 block of South 13th Street in South Philadelphia, the twinkling displays throughout the region could easily take an entire evening (or more) to admire. Click the button below for our guide to holiday lights in Philadelphia for 2016.

Blue Cross RiverRink Winterfest transforms Penn’s Landing into a winterized riverfront park. Winterfest, which overlooks the Delaware River, sits aside a ski chalet-style lodge, winter garden with holiday trees, a heated tent, fire pits and plenty of cozy seating. While ice skating requires a small admission fee, it’s entirely free to come hang out on the grounds and take in the sights and sounds of Winterfest’s festive oasis.

Kids and adults love the 500-square-foot holiday railroad in the piano court at Reading Terminal Market.

Every holiday season, Reading Terminal Market — Philadelphia’s indoor haven for all things food — sets up an impressive 500-square-foot holiday railroad in its piano court. Guests ooh and aah over the 17 working train lines and miniature scenery of Center City and the countryside, all set up around almost one-third of a mile of track. 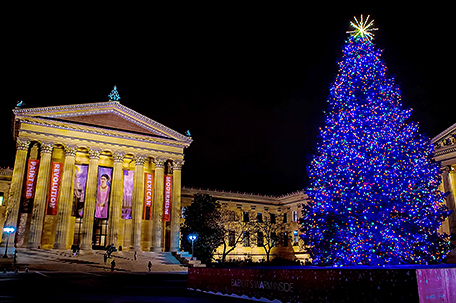 Adorned with glittering holiday lights, a gigantic holiday tree dominates the top of the Philadelphia Museum of Art’s world-famous steps, bringing a festive accent to the city vista.

Every Wednesday evening after 5 p.m., the Philadelphia Museum of Art offers pay-what-you-wish admission. Head down the parkway on a Wednesday in December to see the museum’s elaborate holiday decorations, then take in its priceless art collection.

Peddler’s Village throws the switch on the holidays as tens of thousands of lights glimmer during the Grand Illumination Celebration on November 18. Throughout the holiday shopping season, visitors can check out the annual Gingerbread Competition & Display. And on the weekends, Peddler’s hosts visits with Santa at Giggleberry Fair and other special events.

Penn’s Landing is the place to ring in the New Year with SugarHouse Casino’s New Year’s Eve Fireworks on the Waterfront. Philadelphia’s main attraction on New Year’s Eve draws thousands of people to the Delaware River Waterfront each year. Conveniently located within a short walk of Old City, Society Hill and South Street, Penn’s Landing becomes a festive party with revelers of all ages delighting in a breathtaking fireworks display.

During the Mummers Parade, the only-in-Philadelphia New Year’s Day tradition that dates back to 1901, thousands of men, women and children delight and dazzle crowds with feathers, sequins, music and merriment during a day-long romp along Broad Street from City Hall, site of competition among the Comic, Comic Wench and String Band divisions, to Washington Avenue.