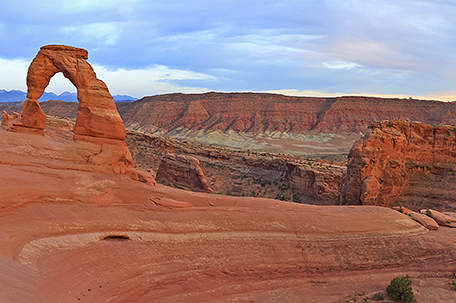 On Friday, September 13 — and 6,165 miles of driving later — my friend Denise and I made it home from our tour across middle America.

When we left Colorado, we went on to Utah, where we visited the majestic National Arches Park. Denise clutched her chest as we climbed the mountains in the Moab Desert, but when we turned the first corner where she saw stone arches created by nature, she happily jumped from the car to take as many pictures as she could, while gasping over again about the beauty of it all! I even convinced her to hike a short distance with me between the formations, warning her to keep a careful eye on where she stepped.

It is important to note that we were prepared for the journey with hiking shoes, walking poles and a first aid kit to name a few. Our car was filled with every possible provision we may have needed, including blankets and pillows should we get stranded somewhere. We even had pepper spray and personal alarms that were attached to us at all times.

We were clear — this was a journey to be done responsibly while having a good time.

What I found interesting in Moab, Utah were the consistent references to aliens and UFOs. While I did not have time to fully investigate, I believe there was something there to it all. Even the restaurant where we had dinner spoke of them (aliens and UFOs) on their menu choices. Imagine that!

Once we had our fill of the awe-inspiring arches, we continued driving west, where our next destination was Las Vegas, Nevada. I had already visited years ago, so this stop was for Denise, who had never experienced the famous strip.

She lost her natural mind.

We stayed at the Venetian Hotel, which was a whole city within a city!  The ceilings were painted like clouds in the sky, so it felt like you were outside.

Boats floated throughout with guests, Olympic-sized pools resplendent with beautiful gardens greeted those who wanted to swim, shops were everywhere and for every pocketbook from bargain to high end, famous chefs had restaurants and could be spotted cooking, food choices were aplenty and last but not least, was the gargantuan casino on the ground floor.

People sat at those slot machines transfixed trying to win a bounty. One woman was so glued to her screen, I was tempted to put a warning label on her about gambling incessantly, and I began giggling at the mere thought of doing such a thing!

My friend was so amazed by it all that she went off for several hours on her own to explore, and earned my diva side-eye for not making me aware where she had gone.

I took her the next day on a driving tour down the entire strip and it was almost comical to see how alive and happy she was, taking pictures of the larger than life structures meant to entice visitors.

I learned from a lifelong resident of Nevada that Las Vegas has become the second most popular place to live for seniors, right behind Florida. The temperature there can be a smooth 117 degrees in the summertime, but since it comes with almost no humidity, it is tolerable for many. During the fall and winter months, the temperature drops to an average of 68 degrees, but much cooler at nights.

The population grew so much that the town went from nine high schools in the late 1980s to 51 in 2019, according to this gentleman who became our pseudo guide in Las Vegas.

I had to agree with him, because the strip I saw was much larger than the one I visited in 2012. Life is grand for businesses there, in part because it has become the mecca for bridal and bachelor parties with millennials, keeping current with the needs of their potential consumers.

After two days, we packed up and headed to our next destination, which became a spiritual journey for me — stay tuned.