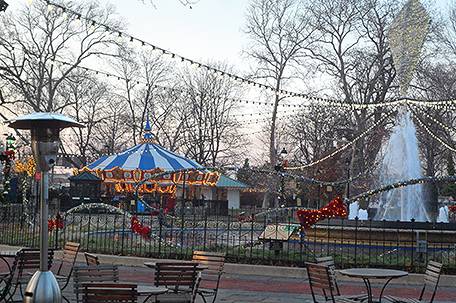 “A merry Christmas to every-body! A happy New Year to all the world!”

Philadelphia is filled with “tidings of comfort and joy” this holiday season along with a host of attractions, festivities and participatory activities. There are, in fact, so many that I am going to concentrate on several of the newest, trendiest and/or most unique.

Comcast Center’s sixth Holiday Spectacular movie opened on Thanksgiving Day at 10 AM in the center’s lobby and will be on view throughout the holiday. The 15-minute state-of-the-art production features, seasonal favorites, animated penguins, the Philadelphia Orchestra, the Pennsylvannia Ballet. The Market & Shops on the concourse level enhance the experience by distributing waterless tattoos to children that may be displayed in exchange for a treat. Shows are scheduled at the top of each hour from 10 AM until 8 PM, with the exception of 5:00 PM, and are free to the public. (17th & JFK Blvd.)

Waterfront Winterfest at Penn’s Landing’s Blue Cross RiverRink is not only the city’s newest holiday attraction but is also one of the city’s premiere free attractions. Waterfront Riverfest debuted on November 29th and will close on January 5th. “Electric Fantastic,” their signature light show, has a hip-hop edge that delights both the young and the young at heart. An Olympic-sized skating rink, video game room, fire pits, heated indoor food services, Art Star Gallery & Boutique, scheduled special events and fantastic views are additional Winterfest attractions. Hours of operation are 7 days a week, 11 AM-1 AM. 101 S. Columbus Blvd. www.waterfrontwinterfest.com

A must for the holiday is an evening in Franklin Square. The “Electrical Spectacle” light show has a Benjamin Franklin theme with a large, central, 10-ft. tall kite and key. More than 50,000 lights twinkle to the music of conductor Peter Nero and the Philly POPS®. The show is performed daily from November 14th- December 31st. The Parx Liberty Carousel, food and shopping vendors, warming stations and mini-golf are also available. www.historicphiladelphia.org

Philadelphia is justifiably famous for one of our most traditional seasonal attractions, Center City Macy’s Grand Court light show. The show was first presented 58-years ago when the store was known as Wanamakers. Wanamakers dated from 1876 but the current granite structure dates from 1910 at which time the bronze eagle and the Grand Court Organ, the largest functional one of its kind in the world, were added. Both items had been displayed during the St. Louis World’s Fair. The store is a National Historic Landmark. The current 100,000 LED light show is narrated by Julie Andrews and is free every two hours during store hours until December 31st.

The 6-000-ft. Dickens’ Village “Christmas Carol” is located in the Egyptian Room. Visitors can stroll through 1840’s London filled with 26 vignettes from Dickens’ “Christmas Carol.” Audio and more than 100 animatronic figures bring the characters to life. www.visitmacysphiladelphia.com

10 Arts Bistro at the Ritz-Carlton of Philadelphia is the focal point of the “Festival of Trees.” Twelve designer Christmas trees have been decorated and will be displayed between December 4th and December 29th. Trees have been donated and adorned by local designers or institutions. Each one is stunning but be certain not to miss the Swarovski tree decorated with crystals and the Franklin Institute’s interplanetary tree. The Ritz is also offering a gourmet Hot Chocolate Menu, there is even one with bacon, and a portion of the profits are donated to Philabundance. It all takes place in the lobby. www.10arts.com

The Mummer’s Parade is the oldest New Year’s parade in the nation and in true Philadelphia holiday spirit an interactive family experience is offered. During special hours December 28-31st for a nominal fee visitors can get a Backstage Pass to watch the Mummer’s rehearse, try on costumes, make and take decorations and practice your strut. The event takes place in the Convention Center. Check for times on the website. www.fancybrigade.com/shows_events/behind_scenes.php

Lit Brothers was once one of Philadelphia’s grand department stores and the jewel in its crown was the Christmas Enchanted Colonial Village. Everyone was sorry when the store closed and the village appeared to have vanished forever. Well, there is good news. The animated figures of the Colonial Village live again until January 5th on the first floor of the Please Touch Museum at Memorial Hall in Fairmount Park as part of its 25,000-piece collection. Scenes on display include a bakery, store and wig and toy makers.

Please Touch has a kid-sized version of the New Year’s Eve festivities with the annual Countdown 2 Noon® Ball Drop held at 12 and 1 PM on Tuesday, December 31st. The ceremony is replete with streamers and confetti blasted from Countdown cannons. Don’t forget that the museum store is an ideal place to purchase children’s Christmas gifts. www.pleasetouchmuseum.org

Six of Fairmount Park’s historic houses are decorated and open for tours this holiday season. Cedar Grove, Laurel Hill, Lemon Hill, Mount Pleasant, Strawberry and Woodford Mansions are each decorated around a separate holiday theme. There are several ways to tour the mansions. Visitors can tour them individually, in groups of up to 14 or on Philadelphia Museum of Art’s Guided Trolley Tour that visits 3 of the 6 houses. www.philamuseum.org/historichouses

Strawberry Mansion is open for holiday tours after a 5-year restoration. This incredible Federal structure with two English Georgian wings was constructed in 1789 by Judge William Lewis and called Summerville. Judge Lewis, an abolitionist, lawyer and politician, was instrumental in the writing and institution of PA’s 1780 “Act for the Gradual Abolition of Slavery.”

The mansion’s theme is “Home for the Holidays” and the house is decorated to reflect the feeling of anticipated holiday gatherings. Highlights of the mansion tour are the ballroom’s early 19th-century French furniture, china collection and the exquisite Banquet Room mural filled with outdoor scenes of early Philadelphia. One of the more interesting scenes depicted in the mural is the 1857 “covered” Girard Avenue Bridge, once the longest covered bridge in the world. It was replaced in 1872 with what was then the 100-ft widest bridge in the country. The #15 trolley began running in 1859 and it is astonishing to think of Civil War soldiers riding it. You should also note the picture of the canal, complete with barge and mule, that would become the current West River Drive.

Also on display in Strawberry Mansion is the “Historical Pageant of Dolls.” The collection originally contained a doll from each state and the District of Columbia. The now defunct Women’s Club of Temple University gifted the collection to the mansion in 1950.

The Philly Pops® are presenting their annual “Holiday POPS!” performances in Verizon Hall. The program will be conducted by David Charles Abell and feature vocalist Angela Brown, The POPS Festival Chorus,
The Philadelphia Boys Choir, The African Episcopal Church of St. Thomas Gospel Choir and Wanamaker’s famed organist Peter Conte. There will be four matinee and five evening performances between December 6th and the 21st. www.phillypops.com

If you have seen the trees and the lights, toured the houses and listened to hours of seasonal music you are now ready to experience New Year’s Eve fireworks Philly-style. SugarHouse on the riverfront will celebrate the incoming year with two displays of fireworks, at 6 PM and again at midnight. The riverfront pathway will be lined with concessions from 5 PM until 12 AM and a free, red trolley, the SugarExpress, will shuttle to Center City until 6 AM. SugarHouse Refinery Restaurant will host the “Funkadelphia” New Year’s Eve party starting at 10 PM and including a champagne toast, open bar and appetizers. Tickets must be purchased in advance. www.sugarhousecasino.com/events

The Winter Family Escape Package, available from now until March 2, 2014, offered by the Hyatt Regency Philadelphia at Penn’s Landing. Tickets to the Blue Cross RiverRink, en-suite movie each evening, use of hotel facilities, a $10.00 Dave & Buster’s Power Card and self-parking are part of the package. www.pennslanding.hyatt.com

Hotel Monaco and Hotel Palomar Philadelphia are both offering the Strut into the New Year Package. You will receive 2 Mummers Fancy Brigade Finale family show tickets and an up close and personal strut lesson with the Mummers. Use code STRUT at www.monaco-philadelphia.com and www.hotelpalomar-philadelphia.com

Visit the attractions and sites in this article and have an outstanding holiday!

“God bless us, every one!” Tiny Tim, Charles Dickens’ A Christmas Carol

I am always looking out for travel accessories and websites to make travel “smoother.” Things change so rapidly that it is difficult to stay abreast of what is current but here are a few I wanted to share.

Traveling with children is never easy but it can be less stressful with a Flexi-Fit Kids Toilet Seat Attachment that is lightweight, comfortable, easily cleaned and adjustable to fit all seat sizes with total stability. The seat is quickly attached and detached and makes trips to the bathroom with a small child simpler for both of you. www.pourty.com

Most airlines no longer serve free meals unless the flights are international and even then you wonder what you will be served. Well, now you can learn more about airline food than you ever dreamt was available. WWW.airlines.net keeps you informed on, not only what is served on the plane, but also in the lounges, crew food service and you can relive “meals past” from the 1950s onward. Nearly 20,000 photographs are on view including pictures and data on “Airline Food in the Movies.” You can watch James Bond as he is served a vodka martini in First Class aboard British Airways, and yes, it is shaken, not stirred.

Even if you are checking your luggage you don’t want it weighed down with toiletries and you don’t want to spend time and money on a trip seeking out items you have forgotten. Minimus offers every product you can think of in a travel size including special diet food items. You can even order in bulk and purchase gift baskets. www.minimus.biz

Let www.Seatguru.com help you locate the perfect seat for your travels. You can pull up seating charts and maps of the airplanes interior indicating lavatories, bulkheads, exit rows, etc.

The 2012 Christmas Village of Philadelphia returns to Love Park for it’s fifth year Nov. 22 to Dec. 24