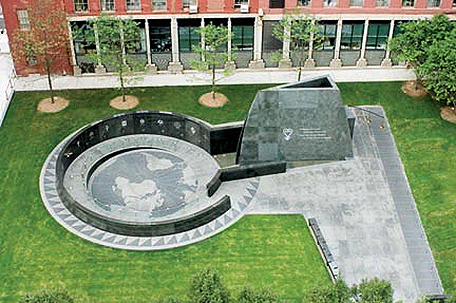 ABOVE PHOTO:  This aerial photo shows the outdoor memorial at African Burial Ground NM in its entirety.  (Credit: NPS)

From the bustling streets of Manhattan to the quiet wilderness of the Sierra Nevada Mountains, the National Park Service preserves many pivotal, but lesser known, sites related to the African-American experience. These places are among the dozens of national parks that convey stories of soldiers, educators, musicians, entrepreneurs, and freed slaves who blazed trails for all to follow. During Black History Month, the National Park Service will laud their accomplishments at hundreds of special events throughout the country, including festivals, concerts, panel discussions, author lectures, guided walks, and ranger programs.

“Tourists and teachers alike are familiar with national parks dedicated to Dr. Martin Luther King, Jr., Harriett Tubman, Frederick Douglass, George Washington Carver, the Little Rock Nine, and the Tuskegee Airmen, just to name a few,” said Acting National Park Service Director Michael T. Reynolds.  “Most know about the great leaders and momentous events associated with the Civil Rights Movement and African-American history. However, national parks also introduce us to others who made an impact. Some of them purposely set out to make a difference, others were just going about their lives, but each made a lasting contribution that deserves a spotlight.”

Consider discovering one of these ten important African-American sites.

This sacred space preserves the remains of hundreds of African-Americans. From about the 1690s until 1794, both free and enslaved Africans were buried in a 6.6-acre site in Lower Manhattan, outside the boundaries of the settlement of New Amsterdam, later known as New York. It is estimated that at one time, as many as 15,000 African Americans — many of them slaves — were buried here. Lost to history, the grounds were rediscovered in 1991 by workers preparing to construct a federal office building.

Outdoor enthusiasts can thank Lancelot Jones for providing opportunities to boat, snorkel, camp, watch wildlife, or simply relax in this park that protects aquamarine waters and fish-bejeweled coral reefs. Born in 1898, Jones spent almost all of his 99 years living on his family’s land on Porky Key in Biscayne Bay. He was an extremely successful farmer and fishing guide who turned down a fortune from developers seeking to build resorts and refineries on his land. He instead sold it to the National Park Service in 1970 in order to protect its natural beauty. For many years, Jones greeted park visitors and school groups and shared facts and stories about the area.

A key post in the defense system of western Texas, Fort Davis played a major role in the history of the Southwest. From 1854 until 1891, troops stationed at the post protected mail coaches, settlers, and travelers. In 1866, a law granted African American soldiers the opportunity to serve in the peacetime army for the first time, and Buffalo Soldier regiments served at Fort Davis from 1867 to 1885. They surmounted the obstacles of harsh living conditions, difficult duty, and racial prejudice, and gained a reputation of dedication and bravery.

Storer College, a historically Black college that operated until 1955, celebrates its 150th anniversary this year with a series of programs and special events. Following the Civil War, philanthropist John Storer gave a generous donation to establish a freedmen’s school. Frederick Douglass was one of the school’s trustees and delivered a memorable oration on the subject of John Brown here in 1881. By the end of the 19th century, the promise of freedom and equality for Blacks was in jeopardy. To combat injustices, Dr. W.E.B. Du Bois and other leading African-Americans created the Niagara Movement, which held its second conference on the campus of Storer College in 1906. The Niagara Movement was a forerunner of the National Association for the Advancement of Colored People (NAACP). Today, the National Park Service continues the college’s educational mission by using part of the school’s campus as a training facility. 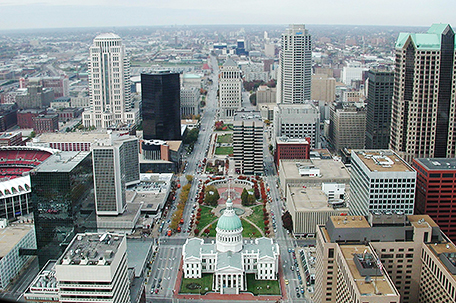 View of the Old Courthouse from the Gateway Arch at Jefferson Natural Expansion. (Credit: NPS )

Though the park’s most recognizable feature is the iconic St. Louis Gateway Arch, it is also home to the majestic Old Courthouse which serves as the park’s visitor center. The Old Courthouse was the site of the Dred Scott trial. In 1847, a slave, Dred Scott, sued for his freedom. Although he was originally granted his freedom, after many appeals the case went to the Supreme Court. The high court’s decision stated that slaves were property, and as such, had no right to sue. The Dred Scott decision was a contributing factor in the start of the Civil War.

Arriving in May of 1899, the Buffalo Soldiers of the 24th Infantry fought a war on two fronts: protecting the community of Skagway while facing discrimination from the people they served. During the gold rush, boomtowns popped up on the edges of the “Last Frontier.” Skagway in Southeast Alaska was an important port on the route to the gold fields. It was considered a lawless community swarming with gold hungry stampeders. Early Skagway was described as “little better than a hell on earth” and “about the roughest place in the world.” As a result, the United States Army sent troops to Alaska to bring law and order and protect people and property. 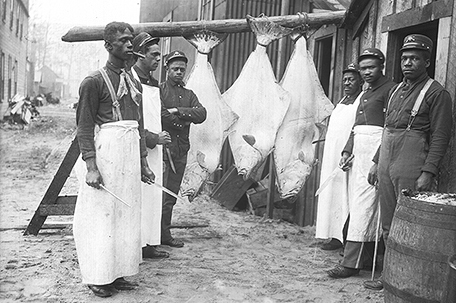 The historic sites maintained by the park and the surrounding preservation district give visitors an opportunity to understand the region’s social, political, and economic development, particularly pre-and-post Civil War. They provide insight into the region’s commercial and agricultural history, especially in relation to the Mississippi River, slavery, and cotton. One of the historic houses belonged to William Johnson, an African American who was freed from slavery in 1820 at the age of 11. Johnson was a barber who eventually owned several barber shops, rental property, a farm, timberland, and slaves. He also kept an extensive diary from 1835-1851 which detailed everyday life in Natchez.

In the mid-19th century, the whaling industry turned New Bedford into a bustling, cosmopolitan seaport community, and one of the richest and most diverse cities in the world. During the 1840’s and 1860’s, New Bedford became a haven for slaves seeking freedom because of its opportunities for employment presented by the whaling industry, a large Quaker population and free population of color, and a coastal trading system that provided escaping slaves the chance to hide on vessels heading to New Bedford from southern ports. Once in New Bedford, some escaped slaves hopped on boats heading to Alaska to better guarantee their chance at freedom. The most famous passenger on the Underground Railroad to arrive in New Bedford was Frederick Douglass. Born a slave in Maryland, he quickly rose to prominence as an abolitionist and anti-slavery speaker after his arrival in New Bedford.

In 1903, the Buffalo Soldiers completed the first usable road into Giant Forest and the first trail to the top of Mt. Whitney (the tallest peak in the contiguous United States).  Their leader, Colonel Charles Young, broke ground literally and figuratively in the park that year. Young, the third African-American graduate of the U.S. military academy at West Point, was the first African-American superintendent of a national park.  In addition to protecting the park from poachers, wildfires, and timber thieves, Young was instructed to extend the wagon road. Breaking the sluggish pattern of previous military administrations, Young poured his energy into the project and by mid-August wagons were entering the mountain-top forest for the first time. Still not content, Young and his men extended the road to the base of the famous Moro Rock. During that summer, Young and his troops built as much road as the combined results of the three previous summers.

In addition to visiting national parks in person, the National Park Service has many other ways for people to delve deeper into African-American history. Learn more at www.nps.gov/aahistory. Additional resources include a series of 41 travel itineraries related to African American History and 24 Teaching with Historic Places lesson plans as well as the Network to Freedom which recognizes sites, programs and facilities associated with the Underground Railroad.