Survey says Americans don’t hesitate to travel when sick, so take steps to protect yourself against the spread of germs 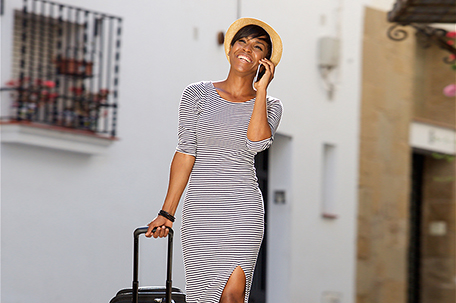 If you’re among the millions of Americans who relish seeing loved ones during the holidays, there’s good news and bad news. The good: you’ll get a chance to visit with family and friends, since 66 percent of Americans say they plan to travel this holiday season. The bad: 100 percent of them will be taking their germs along.

A recent Crowdtap survey of more than 1,000 people, conducted by Robitussin, revealed some interesting tidbits about holiday travel and how Americans handle germs, including:

•  While the majority (82 percent) worry about getting sick during holiday travels, only 48 percent said they would reconsider traveling if they were sick or felt they were getting sick, and only 35 percent would actually cancel their plans.

•  Americans greet loved ones with physical signs of affection, which only adds to the spread of germs, including hugs (40 percent), kisses on the cheeks (22 percent), handshakes (13 percent) and even kisses on the lips (6 percent). Just 12 percent go with a safe “hi” and wave.

“The holidays aren’t just the season of giving gifts and cheer, they’re also the season of giving germs,” says Dr. Charles Gerba, a microbiologist and professor at the University of Arizona. “When people block a cough by holding a hand over their nose or mouth, they’re actually concentrating the virus on their hands. Those hands then touch seatbelts, door handles, airplane trays and countless other objects that others will come in contact with when traveling. Anytime you have a lot of people together in a confined space – a family gathering or in route to one – germs are going to spread like wildfire.”

Since sickness is likely to be widespread after such an increased sharing of germs, 17 percent of holiday travelers said they wanted their cold or flu medication to suppress their cough and 14 percent want the relief to last for 12 hours. A cough medicine, such as new Robitussin 12 Hour Cough Relief formula, relieves cough symptoms all day and all night during holiday travels.

Gerba offers some advice to help Americans protect themselves from cold and flu during holiday travels – and the rest of the winter:

Be aware of germ risks while on the road

Plenty of Americans will fly, take a bus or travel by train to visit loved ones during the holidays. While public transportation may be convenient, it’s also a germy way to travel. Taking a bus increases your risk of catching a respiratory infection six times, researchers have found influenza viruses on airplane trays and studies show trains are the most germ-filled mode of public transportation, Gerba notes. Americans seem aware of the risks; 38 percent said public transportation such as a plane or bus is the worst place to be sick with a cold or flu.

“There’s no time to disinfect surfaces in an airplane between flights, so you are always flying with someone else’s germs,” he says. “Most of the risk for getting a cold or flu on a plane is the person you sit next to and the people in the row in front and back of you, because of the way the air flows in airplanes.”

Hygiene is key to a healthy holiday season

Good hygiene is even more vital during the holidays, when families and friends come together and bring their germs from all over the world. It’s possible to pick up germs during your travels and transmit them to loved ones before you actually start to feel ill.

“Hand washing and hand sanitizers are probably the best defense to reduce your odds of getting a cold or flu by half, especially after being in public areas,” Gerba says.

Try to avoid shaking hands and hugging or kissing anyone who has a cold. Push buttons with your knuckles and use a paper towel or sanitizing wipe to cover door knobs and bathroom stall latches before you touch them.

If you do contract a cough, cover your mouth and nose when you sneeze or cough, and use a trusted cold remedy, such as Robitussin Maximum Strength Severe Multi-Symptom Cough, Cold & Flu, to relieve a variety of symptoms.

“Protecting yourself from a cold or the flu doesn’t mean you have to give up seeing loved ones for the holidays,” Gerba says. “Practice good hygiene and take steps to protect yourself – and you can enjoy the company of your family and friends without worrying about feeling under the weather.”

Simple steps can keep you and your family healthy

Bed bugs and summer travel: How to protect yourself