It’s still cool to hang out in Greenwich Village 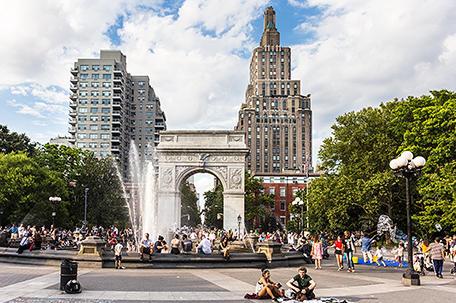 ABOVE PHOTO:  People enjoy some street performance in the Washington square park in the heart of Manhattan on a sunny summer Sunday in New York City.  (Photo: AsiaTravel / Shutterstock.com)

NEW YORK– As a teenager in New York City in the gritty 1970s, I often hung out in Greenwich Village with friends. There was nothing cooler than buying a tie-dyed T-shirt in some little shop or listening to a guitar-playing hippie in Washington Square Park.

As an adult in the complicated 21st century, I can still recommend the Village as a magical place to spend a day, but its charms are different now. The neighborhood’s bohemian reputation gave way long ago to expensive real estate, but you can still enjoy a bite in a cafe or a night out listening to live music. And while the city’s latest terror attack unfolded nearby in Lower Manhattan, perhaps a stop in the Village at a peaceful spot like the garden at The Church of Saint Luke in the Fields, 487 Hudson St., is just what a harried visitor needs.

Start your day at Patisserie Claude, a tiny bakery at 187 W. Fourth St., serving yummy little quiches and pastries. For lunch, try the massive chicken Chimayo salad for $13.50 at Cowgirl NYC, 519 Hudson St., though that might leave you too full to sample the goods at Murray’s Cheese Bar, 264 Bleecker. For dinner, find a friend to share Mediterranean small plates at Jack’s Wife Freda, 50 Carmine St., or go for rustic Italian at Rafele , 29 Seventh Ave. South.

If you enjoy reading, the bookstore Three Lives & Company, 154 W. Tenth St., is a must. I went in just to look around and walked out with an armful of books.

If you loved the TV show “Friends,’’ you’ll need a selfie outside the building where the gang lived at the corner of Bedford and Grove.

Fans of “Sex & the City’’ have two stops. Even though Carrie Bradshaw lived on the Upper East Side, the brownstone used for exterior shots of her home is in the Village, on Perry Street. Its steps are roped off and a sign asks visitors to donate to a charity for homeless dogs and cats. “Sex & the City’’ also helped make Magnolia Bakery famous, at 401 Bleecker St., where cupcakes are piled high with swirled frosting. 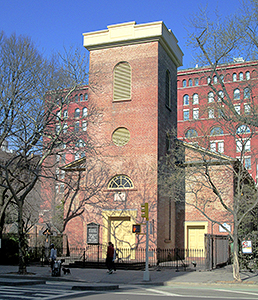 The Church of Saint Luke in the Fields

The house at 75 1/2 Bedford St. was once home to the Pulitzer Prize-winning poet Edna St. Vincent Millay, and at just 91/2 feet (2.9 meters) wide, it is billed as “the narrowest house in New York’’ (though that claim has been disputed). The Cherry Lane Theatre at 38 Commerce St. proudly boasts of showcasing early works by playwrights like Sam Shepard and Harold Pinter. And the White Horse Tavern at 567 Hudson has been a favorite bar for famous writers from Jack Kerouac to Dylan Thomas, who is said to have downed his last shots there before collapsing. He died soon after.

Google “Bob Dylan walking tour’’ and you’ll find lots of options for tracing the footsteps of one of the biggest names ever associated with Greenwich Village. The Washington Square Hotel, 103 Waverly, where Dylan once stayed, recommends a self-guided map tour with stops on MacDougal Street and at the Bitter End, 147 Bleecker, where he performed and where you can still enjoy live music.

Jazz lovers will want to check out the Village Vanguard, 178 Seventh Ave. South, while Marie’s Crisis Cafe , 59 Grove, is known for its lively piano bar.

Riots erupted in 1969 after a police raid at the Stonewall Inn, a gay bar at 53 Christopher St. The Stonewall National Monument was established across the street in 2016 at Christopher Park to mark the birthplace of the gay rights movement. The park is also home to sculpted figures by artist George Segal in a work called “Gay Liberation.’’

Until Feb. 11, the massive white marble arch at Washington Square Park is the site of a cagelike installation by Chinese activist-artist Ai Weiwei. It’s one of 300 of his works on display around the city, all themed on the global refugee crisis.

Greenwich Village was settled before Manhattan’s numbered street grid was put in place, and its named, irregular streets can be confusing to navigate. Even the numbered streets don’t always make sense, like the illogical intersection of West Fourth and West 10th streets. For those who need some reference points, the neighborhood runs south from 14th Street, north from Houston, west to the Hudson River and east to Washington Square-University Place (though the eastern border is a subject of debate among locals). The West Village usually means west of Sixth Avenue (though that can be debated as well).

Don’t get too hung up on geography, though. Just call it the Village, find a cafe and channel your inner cool.