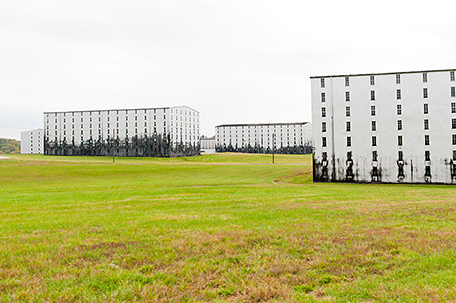 ABOVE PHOTO:  Heaven Hill Distillery warehouses, The black fungus growing at the base of the buildings is a natural result of the maturing process. (Photo: Irina Mos / Shutterstock.com)

I find it profoundly interesting that Bardstown is in the heart of the Kentucky Bourbon Trail, a hub of religious tourism and one of the country’s most haunted areas. The irony of these three types of “spirits” being centered here is not lost on travelers who visit from around the world to embark on one or all of the offered trails. We followed the Bourbon Trail last week and this week we will follow portions of the remaining two trails. kentuckytourism.com

The first spirits we’ll seek are those who inhabit an otherworldly realm, and whether you believe in spirits or not each site has so much history that you can’t help but be intrigued. Just for fun, you can dress for spirited success and gear up at the Ghost Hunter Shop in Lexington or on it’s online site. ghosthunter.com 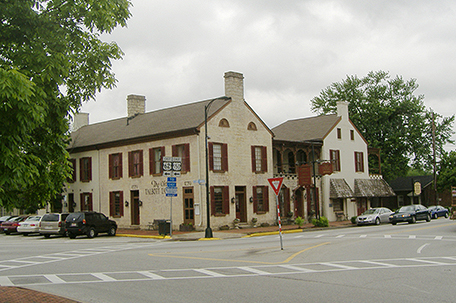 Bardstown is home to the 1779 Old Talbott Tavern, originally the Hynes Hotel. At the time, it was the final stagecoach stop on the frontier and as such it hosted many notables including Audubon, Daniel Boone, Presidents Andrew Jackson and Abraham Lincoln (who was born 20 miles away from Bardstown), the James Brothers, and General George S. Patton. The inn and tavern have operated since it opened and it was listed on the National Register of Historic Places in 1973 and currently offers six suites to guests. Talbott Tavern has for years been the reported site of ghostly occurrences including apparitions, sounds and movement of objects. talbotts.com

Adjacent to the tavern is the Jailer’s Inn Bed & Breakfast, named by the Travel Channel one of the “Ten Most Haunted Places in the United States”. A jail has been at this site since 1797, but the current building dates from 1819. It was expanded in 1874 and continued to function as a jail for another 13 years. Every area in the building is reportedly haunted by a plethora of spirits including that of Jesse James, a frequent visitor while living with his cousin, the jailer’s wife. A tour of the jail compound is outstanding and includes the prison cells themselves. There are also guest accommodations, a small display of artifacts, and the area in which prisoners were hung. Seven guest accommodations are offered and tours for the general public can be taken daily. jailersinn.com

The Georgian Wickland mansion was constructed in 1828. The house features 14.5-ft. ceilings, 16-inch high baseboards, a double parlor and a three-story staircase with a continuous banister containing 174 balusters. It was sold out of the family in 1919. Wickland was home to three Kentucky governors and it is now equally famous for the twin spiritualists, Katie and Michael Wilhite, who participate in the “Spirits of Wickland Tours”. 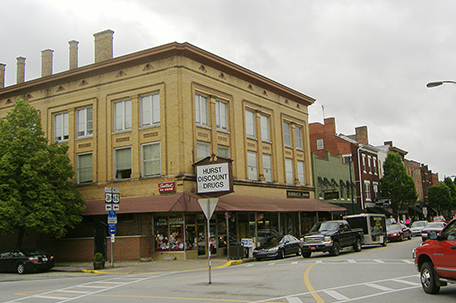 The young ladies discovered they could “speak” to the spirits in the mansion while volunteering to decorate for the holidays some years ago. Their information has led to advancements in historic research and they have worked with law enforcement. There are a number of spirits connected to the house but those who appear most often are former enslaved workers Waleta, the cook, and Antoine, a child who worked in the garden. Ghost hunters have visited and with an advanced reservation visitors can share the experience on a 90-minute tour. historicwickland.com

The Bardstown region is sometimes referred to as the Kentucky Holy Lands and the  “spiritual” history of the city began in the 1780s when Catholics, largely from Maryland, migrated to Kentucky. Four dioceses were established in 1808 with Bardstown being the furthest west, covering what are now nine states. Bishop Benedict Joseph Flaget arrived in 1811 and built a small church. In 1816 Bishop Flaget, along with the labor of local parishioners, began construction on the first cathedral west of the Allegheny Mountains. The Basilica of St. Joseph Proto-Cathedral was consecrated in 1819. In 1995, the Vatican honored the cathedral for its contributions to Catholic Church heritage.

Interior tours include artwork gifted by Pope Leo XII and French King Louis-Philippe. Each pillar is a single, 17-inch thick, yellow pine tree trunk that was painted to replicate marble. An access panel in one pillar allows visitors to view an original column. stjoechurch.com

The United Society of Believers in Christ’s Second Appearing was founded in Manchester, England in 1747. Nonmembers referred to them as Shakers in reference to the ecstatic heights they attained during religious services. Mother Ann Lee, their leader, moved along with eight congregants to the United States to escape persecution. They sailed from England in 1774 aboard the Mariah and landed in New York and began converting individuals.

Their basic beliefs included celibacy, racial and gender equality, personal freedom, humility, pacifism, communal living and confession on a regular basis. Every act in life was a form of worship whether at work or formal religious service. In order to obtain membership one had to be 21-years old, turn over your property, be debt free and live in special housing for five years before being fully admitted.

Kentucky’s Shaker Village at Pleasant Hill was founded in 1805 with the first permanent structures erected in 1809. The village closed in 1910 and restoration was begun 50 years later. Pleasant Hill is the largest restored Shaker village with more than 40 historic buildings on 3,000-acres, the largest collection of original 1800s structures privately held. It is also the state’s largest National Historic Landmark.

The village is open daily and visitors can take docent-led, self-guided tours and wagon tours and participate in numerous activities. On the grounds there are more than 25-miles of stone walls, the biggest concentration in the country, and Red Durham cattle, the world’s oldest breed. The Shaker’s history is interpreted in several galleries and includes information on their crafts, musical heritage, family life, education and African American Shakers. Meals created from garden fresh ingredients are served at the on-site restaurant The Trustee’s Table.

BBC News named the Shaker Village at Pleasant Hill a top hidden travel destination. Travelers can experience the serenity of the village as an overnight guest in one of 80 rooms, suites and cottages in 13 restored buildings with Shaker décor and original architectural elements. shakervillageky.org

Select your spirits and follow their trail in Bardstown. visitbardstown.org

Spirits of Bardstown (Part One)