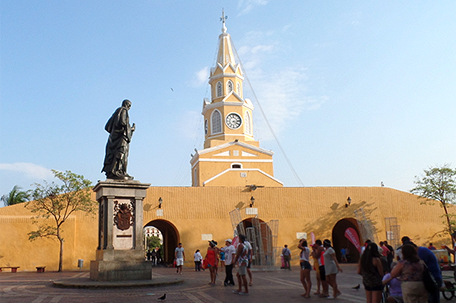 A third-story “Afro-Colombian mural, Currulao y Desplazamiento,” is located at 1344 U Street NW of Washington, DC.  The mural pays homage to the thriving culture in Colombia that traces its roots to the Africans that infused the New World with customs and traditions brought from their motherland and Cartagena de Indias is the best place to immerse yourself in this history. Colombians of African-descent represent the third largest black population outside of Africa and the second largest in South America. Cartagena is a living history museum of the Afro-Colombian culture and colonial Spanish history and is the location of a UNESCO site.

The city is situated on the northern Caribbean coast of Columbia. Prior to the Spanish, and subsequent naming as Golfo de Barú, the region was settled by the Calamari Indians. On June 1, 1533, Don Pedro de Heredia established Cartagena de Poniente. African slaves had been introduced into New Granada, Colombia, in the 1520s and by the 1770s more than 55 percent of the country was comprised of free people of color.

During the colonial era Cartagena was one of the Spanish Main’s most significant ports. Precious metals were shipped from the port and supplies, products and slaves were imported. Cartagena would become the main slave port in the Spanish colonies, one of only two official slave ports, and the final port before crossing to Spain. Because of its lucrative trade it became prey for other European powers and defense became important. The Spanish erected defensive walls beginning in 1586 and continued into the 1780s. The protected area includes the cathedral, the Government Palace the areas where the rich and middle class lived and Gethsemani the section of the city where the slaves lived and now the neighborhood many o their descendants continue to inhabit. whc.unesco.org

Cartagena’s fortification is an outstanding example of 16th 18th-century military architecture, the most extensive and complete in the New World. The walls extend nearly seven miles and are 25-ft. thick and up to 83-ft. high. The walls and outer forts took more than 200 years to construct and 16 of the original 21 bastions are extant. There are areas where you can walk the walls and one of the high points of a visit is a sunset drink atop the walls at the Café del Mar.

Spain’s King Ferdinand commanded the construction of the fortress, Castillo de San Felipe de Barajas, the strongest and most impressive of all the Spanish fortifications. Antonio de Arévalo designed it with the main portion completed between 1639-57. It was constructed, as were the walls, using slave labor atop the 130-ft. San Lázaro Hill. There is a path to the fortress, not for people with heart or mobility issues, and the reward is a panoramic view of the city. 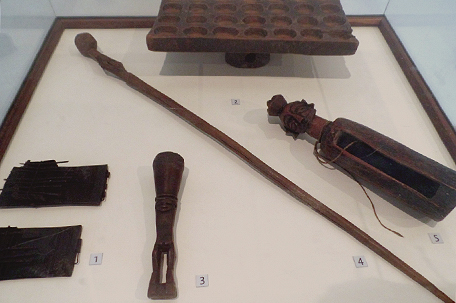 It is estimated that the number of enslaved Africans, who came through Cartagena’s port exceed 1-million and Africans arriving in Cartagena were listed according to their land of origin and skill set. This form of registration, casta de nación, morphed into surnames and today allows people to trace their ancestry. Once they arrived slave sales were held in the Plaza de los Coches, now referred to as the Plaza de los Coches. 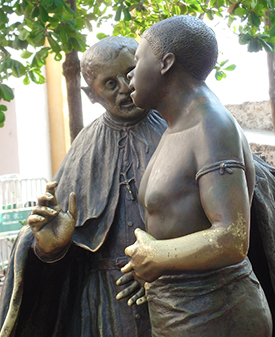 Peter Claver, “Apostle of the Slaves,” was born in Spain in 1581 and lived in Cartagena from 1610 until his death. Ordained in 1615, he spent his life ministering, by his estimate, 300,000 slaves. He was known to take a canoe out to arriving ships and feed and care for new arrivals. Reviled by many in his lifetime, he was canonized in 1888 and named the city’s patron saint. A statue in the Plaza San Pedro Claver honors his works with a life-sized sculpture of Claver with a slave situated at ground level encouraging examination and interaction.

A few steps from the statue is the entrance to the Cloister, Museum and Church
of St. Peter Claver. The Cloister is a good place to reflect and it is important as the location of Claver’s slave baptisms. A flight of stairs leads to the small room where he died in 1654 after a  four year illness. At ground level a museum exhibits artworks and artifacts. The church features a marble altar containing St. Peter Claver’s remains. cartagenainfo.net/saintpeterclaver

The Plaza de Bolivar, dominated by a statue of Bolivar the country’s liberator, dates from 1856 and is and is filled with wonderful architecture and colorfully garbed Palenqueras selling fruits carried on their heads. The Palace of Inquisition, a two level museum that interprets the Spanish Inquisition from 1776 to 1821, on the plaza, displays itorture devices, information panels, artworks and a video that relates the true tale of an African female tortured and executed for using indigenous cures. The second story is a must-see as it covers the three main cultures in Colombia through artifacts, dioramas, paintings and maps. Before leaving the area be certain to see the window on the side, topped by a cross, where people were denounced as heretics.

From the moment Africans landed in Colombia they protested and made escape attempts. The first slave revolt, one of the earliest in the Americas, took place in 1530, revolts followed in 1545, 1550, 1555, 1556, 1557 and 1598. Benkos Bioho founded the walled Palenque de San Basilio, a free community in the hills, in 1603. This was the first such community and it is located 30-miles southeast of Cartagena. The village maintains its African heritage, music, dress, political and social traditions, arts and language to such an extent that it was inscribed as a UNESCO heritage site in 2005/08. There are more than 3,000 residents who are directly descended from the original settlers, most speaking Palenquero, a unique creole language with Bantu roots. After repeated attempts to conquer the village Spain officially declared it free in 1713. Scheduled tours, including dance and music performances, can be arranged. cartagenaconnections.com

After initially resisting Bolivar began recruiting slaves to participate in the revolution in 1819. On May 21, 1851 slavery was abolished.