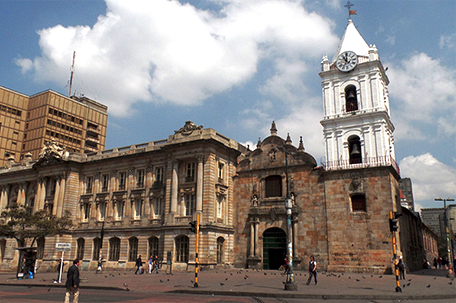 ABOVE PHOTO:  Cathedral and Square

It is estimated that during the slave trade approximately 12.5-million Africans were taken from Africa with an estimated 10.7-million completing the voyage to the Americas and only about 10 percent of those captured taken directly to North America. The coastal area of Colombia, South America was such a large and lucrative slave port that more than 300,000 Africans passed through the city. Today Colombia’s current black population is the 2nd largest in South America and the 3rd largest outside of the continent of Africa.

To experience a unique aspect of African diaspora history and the mixture of three cultures Colombia is the perfect location and now is the ideal time. Because of its geographical location the weather is consistently wonderful and food and activities are affordable.

The region known now as Bogotá has always been important and the earliest evidence of habitation of Colombia, 12,400 BC, has been found in the area. The Muisca people, prior to Spanish arrival, established the first city, Bacatá, around 1,000 AD. The first conquistador to reach Colombia was Alonso de Ojeda who accompanied Columbus on his second voyage. Gonzalo Jiménez de Queseda entered the land of the Musica on August 6, 1538 and christened it Santa Fé de Bacatá. Spain divided colonial America into 4 Viceroyalties, one of which, New Granada, encompassed Colombia, Ecuador, Panama and Venezuela with Bogotá as the seat of power.  Santa Fe de Bogota became the capital of Gran Colombia in 1819 after Simón Bolívar liberated the city. In 1886 it was designated the capital of the Republic of Colombia.

Slaves were introduced into Colombia in the 1520s and were largely domestics and laborers. The first slave rebellion, one of the earliest in the New World, occurred in 1530. Some slaves escaped, forming Cimarrones communities, some purchased their freedom and many intermarried creating the racial mixture evident today. On May 21, 1851 slavery was abolished. Día de la Afrocolombianidad or Afro-Colombian Day has been celebrated annually on May 21st since 2001. It commemorates the abolition of the slave trade and the contributions of Afro-Colombians. The date was selected to honor the founding of Palenque de San Basilio, the first free town in South America. BogotAfro Week Festival is built around that date and includes music, dance, cuisine and art presentations.

Bogotá is often referred to as “The Athens of South America” and it is one of those wonderful cities where the historic and the modern are found adjacent to one another and there is a surprise around every corner. Tours should begin in the historic district with several sites that draw international visitors year round.

The most popular in the country is the outstanding and world’s largest gold museum, the Museo del Oro. The museum’s collection exceeds 40,000 objects, only 15 percent are on view, representing every major pre-Columbian culture at the time of Columbus. Colombia produces the finest emeralds in the world and pre-Columbians considered them sacred and they were only worn by priests. They could mine them but were incapable of cutting them so on view is the world’s largest uncut emerald. Salt was used as currency while their leaders wore gold symbolically because it was yellow and bright like the sun they worshipped. The galleries are filled with sacred and ornamental objects that take your breath away. A highlight of a tour is a gallery in which the ceremony of installing a new leader is recreated. banrepcultural.org/gold-museum

Colombian born Fernando Botero is one of South America’s greatest artists. The Museo Donacian Botero was established in 2000 to display 208 works donated by the artist, 85 by other artists in his private collection and 123 artworks. The museum is located inside a 2-story colonial house with galleries arrayed around a courtyard. banrepcultural.org/museo-botero 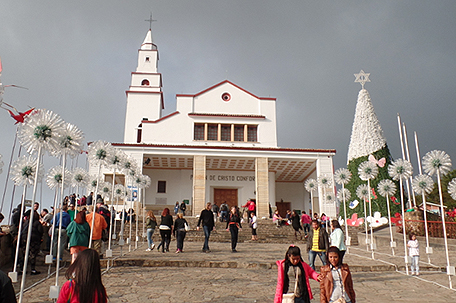 Church of the Fallen Christ

The Plaza de Bolivar is the oldest square in Bogotá showcasing the country’s oldest monument, the 1846 statue of Simón Bolivar sculpted by Pietro Tenerani. Surrounding the statue on the square are the 1989 Palace of Justice and Parliament. The Parliament building was completed over a 100-year period from 1826-1926. The Cathedral of Bogota was constructed in the east of the square in 1823 adjacent to a 17th-century chapel.

The 1604 Casa del Florero houses the Museo de la Independencia. It features memorabilia, portraits, documents and artifacts from the War of Independence. The building is archeologically significant as an excellent example of 16th-century santafereñas houses influenced by Moorish architecture.

Cerro de Monserrate is referred to as the guardian of the city. It rises more than 10,000 feet above sea level and offers awesome views of the city below. Visitors can get to the top via 7-minute cable car, funicular or a 90-minute walk on a scenic trail. The mountain has been a pilgrimage site since the early 1600s and one of the do not miss activities on the mountain are life-sized sculptural Stations of the Cross.

The Catholic Basilica of the Fallen Lord Christ of Monserrate was completed in 1657 and was dedicated to the “Fallen Christ.” In 1917 an earthquake destroyed the church and rebuilding was accomplished by 1925 by requesting each pilgrim visiting the site to carry a brick to the top. The Gothic-revival church has a plain interior

A path in the rear of the church leads to the Mercado de Monserrate filled with food stalls featuring local cuisine, products and spices as well as kiosks with handcrafted items. This is a good place to purchase souvenirs and gifts.

Bogotá is the perfect gateway to Colombia. The city is safe, no you won’t be kidnapped, colorful and just different enough to make a trip a real adventure. With a little research you can spend a week there as cheaply as you can in Atlantic City. Be on the lookout for our continued journey into the heart of Afro-Colombia in Cartagena.