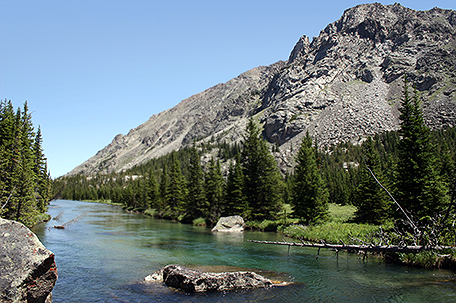 RED LODGE, Montana –Crawl from your warm sleeping bag out the tent door, into the darkness and pre-dawn wind whipping across the plateau. Look up at the cathedral of the sky. Watch the whirlpool of constellations spin overhead. Hold your breath.

It’s hard not to feel vertigo in the majesty of Montana’s wilderness. Whether you seek the rocky heights of a 10,000-foot (3,000-meter) peak or an endless chain of lakes, pastels in a mountain meadow or the endless catch of trout, trek into the one of the state’s most magnificent ranges, the Absaroka-Beartooth Wilderness, to find solitude and grandeur.

Don’t be put off by the name of the best way to get in there: the Beaten Path, a 26-mile (42-kilometer) trail that climbs up and over the Gallatin National Forest watershed divide, wending its way past pond after lake, peak after cliff, meadow after plateau. The trail has a reputation for high foot and horse traffic, but in the five days we backpacked through last summer, my hiking partner Ben Yeomans and I saw just a handful of others and embraced the solitude.

The trailhead sits at the southeastern edge of East Rosebud Lake. Accessible by car from the north via a 14-mile (22-kilometer) road from Roscoe, the lake’s shores are dotted with cottages and cabins, and make it an easy jumping-off point for the wilderness.

We decided, however, to access the path via Red Lodge, a tourist town east of the wilderness that is best known as the jumping-off point for the Beartooth Highway, the breathtaking drive that climbs to 11,000 feet (3,352 meters) while winding along the border with Wyoming.

After spotting a car just west of Red Lodge, we hitchhiked two-thirds of the way up West Fork Road, until we got to a trailhead to climb north, and up, out of the river valley and onto the Red Lodge Creek plateau. Much of the valley and surrounding ridgeline is a moonscape of charred timber and ash on the forest floor, the result of an intense 2008 fire. Our boots and legs were gray and dusty by the time we reach tree line, and the parched vales and streambeds on the way up made us glad we packed extra water.

Up to 9,800 feet (3,000 meters) then down off the ridge, we camped on the marshy shores of Crow Lake, hemmed in by a seam of serrated peaks that turned crimson at sunset.

The following day, we climbed out of the valley and crossed an amber meadow carpet, then descended a dusty switchback to arrive at East Rosebud Lake and the beginning of the north end of the Beaten Path.

The path wound south, past one lake after another, following East Rosebud Creek as it drains north. The fishermen we passed carrying trout in plastic bags provided reassurance that even novice anglers like ourselves could catch something. At Elk Lake that night, we did not.

The next day we climbed, alternating between switchbacks and scree fields perched over the creek scouring the valley walls. When the trail widened again, along Rainbow Lake, the sun had turned the waters into a sea of floating jewels. We took a couple of cliff dives from the overlooking ledges into the frigid alpine water, then apologized to the guy patiently casting flies just around corner.

One of the beauties of the Montana alpine terrain is how easy it is to wander. That night, we bushwhacked off trail, upstream to Echo Lake. Pika Peak, named for the small, furry rodent that we saw occasionally darting along the trail, was bathed in a tangerine sunset, and we were astounded that, literally, with every cast of our reel, we pulled in brook trout well in excess of a foot. Pan-fried trout for dinner and for breakfast.

We reached the headwaters of East Rosebud Creek the next day, after a gradual climb up and across meadow after meadow, past Impasse Falls, the highest cascade along the path.

We topped out at the divide, at 10,200 feet (3,100 meters), at Fossil Lake. After being baked red by the sun for three days, we welcomed the wind but not the spitting snow and hail. We bundled up and descended.

At Fulcrum Lake, above tree line but in the lee of a rocky knob, our luck with the trout was gone. Our consolation was eating dinner perched on a rock at water’s edge. Below us, mountains stretched to the horizon. And when the winds quieted at dusk, the lake’s surface swallowed the port sky. Pinprick starlight bounced back into the heavens from where it came.

On the final climb down, we passed so many lakes, we had to resist trying to fish every one of them. The lake names themselves are things to behold: Anvil, Sourdough, Stardust, Courthouse, Fossil, Fizzle, Froze to Death, No Bones, Dude. Gradually the forest pines closed in, and the trail felt claustrophobic after spending so much time open to the sky. The riot of wildflower reds, oranges and yellows beneath our feet took the edge off our wilderness farewell and re-entry to civilization.

The Atheist In The Woods