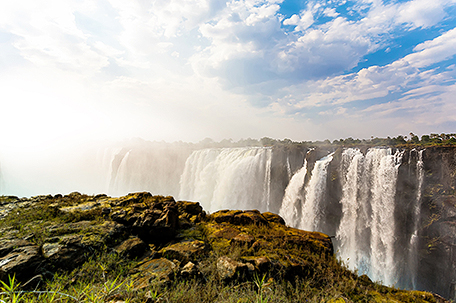 “The Africa within, which we carry, sees the mirror image of the Africa without and something within our soul responds.” –Dr. Ian Player

The Republic of Zimbabwe, bordered by Botswana, Mozambique, South Africa and Zambia, is easily accessible, has a developed infrastructure, uses the American dollar as standard currency and boasts several of Africa’s most significant historic and natural attractions. There are five UNESCO World Heritage Sites within its borders.

The area has been an important trading center since 900 AD when the Mashona people traded their primary trade item, gold, with other cultures. Zimbabwe’s “stone houses” were the traditional homes of the rulers and although more than 180 of these ruins exist the most significant was the capital of the Kingdom, Great Zimbabwe. This 1,720-acre complex, located between the Zambezi and Limpopo Rivers, at its height housed more than 15,000 people and is the largest sub-Saharan collection of ruins on the continent. There are two main complexes, the Valley Enclosures and the Great Enclosure and at some points the walls, constructed of granite blocks without mortar, reach a height of 37-ft.and a width of 20-ft. Eight soapstone Zimbabwe birds were carved here atop a series of columns and are now depicted on the country’s flag. The birds have lips and feet instead of a beak and claws. Artifacts found at the site are featured in an on-site museum. The monument, a UNESCO World Heritage Site since 1986, is open Monday-Saturday.

The largest of Zimbabwe’s parks is the 5,657-sq, mile Hwange National Park, once the hunting province of the a Ndebele king, designated in 1929 the Wankie Game Reserve. Hwange has a variety of landscapes and more than 105 mammal and 400 bird species including 20,000 endangered elephants and the world’s largest population of wild dogs. Game drives here are spectacular because you are virtually guaranteed to spot some of the abundant wildlife, among them the giraffe, cheetah, brown hyena, zebra, leopard, lions, rhinos, wildebeest and buffalo. The park is on the edge of the Kalahari Desert and some of the animals move from there to graze in the parks natural saltpans. (http://zimbabwe.com/st_location/hwange-national-park) 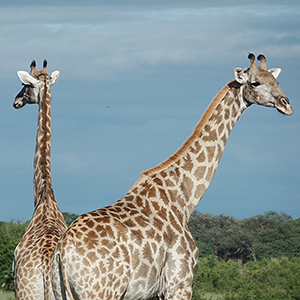 The Painted Dog Conservation Center is on the park’s border. African wild dogs are unique to the continent and the center is dedicated to conservation, rehabilitation and education. Their population went from 500,000 to 3,000 in 10-years before they were reintroduced into the park. They weigh up to 79-lbs. and can attain speeds of 41 M.P.H. Visitors are welcome. (http://www.painteddog.org)

There are numerous types of accommodations from which to select in the Hwange area, from camping to luxury lodges, for all budgets and to match your African dreams. If your desire is the ultimate “Hemingwayesque” adventure while basking in luxury, Elephant’s Eye Lodge is the natural choice. Just as elephants — who originated in Africa, are majestic and the only large animal capable of shaping their environment to suit their needs — so too is the iconic Elephant’s Eye Lodge. The staff is dedicated to crafting your fantasy safari adventure.

Elephant’s Eye is situated just outside the park and is completely environmentally friendly. The complex is comprised of the main lodge area and eight deluxe chalets, tented and built atop stilts, with commanding views of the waterhole below for game sighting and sunrise and sunset viewing. Suites have netted beds, a fireplace, wireless Internet, designer amenities and an awesome outdoor shower.

All meals are prepared by a chef and are followed by drinks around the firepot located near a waterhole for night game viewing. A spa and curio shop also on site. Game drives and visits to area places of interest can be arranged. The staff is exemplary and can be credited with making a stay here extraordinary. (http://www.jenmansafaris.com/accommodation/elephants-eye-hwange) 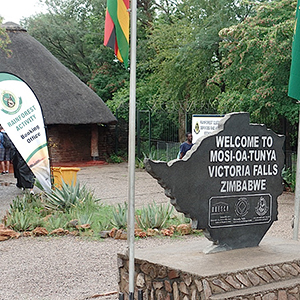 A 90-minute drive from Hwange along a main road is Zimbabwe’s greatest jewel, Victoria Falls. White settlers began encroaching into the region in earnest in the 1880s and in 1888 the British South Africa Company, led by Cecil Rhodes, traded money and guns for the region’s mineral rights. Salisbury was founded in 1890 and is today the capital Harare. War was inevitable and when the land conquered, the country colonized by the British and the land renamed Southern Rhodesia in honor of Rhodes. Natives were forced onto reservations and their lands were given to white settlers. Two laws, in 1930 and 1969, declared it illegal for a Black to own land in a white area. In 1965, Rhodesia declared the Unilateral Declaration of Independence when a division developed with Britain over colonial policies. On April 18, 1980, Zimbabwe gained independence.

Victoria Falls inspires awe even at a distance as if commanding your attention. The sound of the falls echoes for 25-miles and the 1,300-ft. rising mist can be glimpsed for 30-miles. The indigenous people called it “Mosi-oa-Tunya,” “the smoke that thunders”.  The Falls, located on the Zambia/Zimbabwe border’s Zambezi River, are the only ones with a height exceeding 328-ft. Artifacts discovered there indicates that the region was inhabited 2-million years ago but it was not until 1855 that they were officially “discovered” by David Livingston the explorer and missionary. It was designated a UNESCO World Heritage Site in 1989 and is one of the Seven Wonders of the World. (http://victoriafallstourism.org) 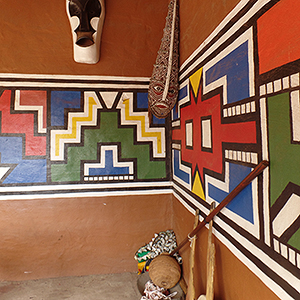 Victoria Falls is spectacular in every season. They are more than a mile wide and nearly 145,300,000-gallons of water pour over the basalt cliffs every 60-seconds. Of the five falls, four are located in Zimbabwe, The Devil’s Cataract, Horseshoe, Rainbow and the Main Falls. A paved path allows visitors to walk along the falls and view them from several vantage points. It can be completed in 90-minutes depending upon your interests and the number of stops you make and if you elect to take the 73 steps down into the gorge to the Cataract Viewpoint. The David Livingston statue provides a perfect spot for a photo op as is the rainforest portion of the path.

The town of Victoria Falls is also a destination for active adventure. Boat cruises, helicopter tours, safaris and bungee jumping are just a few of the offered activities. The luxury Ilala Lodge is a 10-minute walk to the falls entrance and is adjacent to the famous Craft Market. In addition to great accessibility and deluxe accommodations, the hotel provides superior service with old world elegance. (http://ilalalodge.com)

A private charter, the Ra-Ikane departs daily for a guided sunset cruise complete with dining, drinks and spectacular views of Zimbabwe and Zambia. The boat replicates Livingston’s Ma-Robert boat and named in honor of his most important African guide.

I wish you smooth travels.