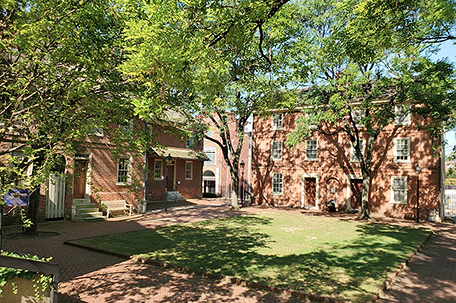 On Monday, September 17, 1849, Araminta “Minty” Ross set out from Poplar Neck Plantation, located on Maryland’s Eastern Shore, to freedom in the North. Prior to her escape, she changed her name to Harriet, after her mother, and took her husband’s last name.

It is undocumented exactly how long, by which route or who assisted her on her 140-mile journey to Philadelphia, but it is believed that she traveled by night, following the North Star, and was aided along the way by supporters of the Underground Railroad (UGRR). She probably followed the Choptank River in Maryland into Delaware and on to Pennsylvania. (www.nps.gov/history/ugrr.)

Slavery was legal in Wilmington, and it became known as “the last stop to freedom” because of its proximity to Philadelphia. An active, multigenerational, interracial and religiously diverse network of abolitionists there provided transport, funding, clothing, shelter and contacts.

Wilmington was pivotal to freedom seekers and several of its sites are listed on both the National Underground Railroad Network to Freedom and the overlapping Harriet Tubman Underground Railroad Byway that begins at Maryland’s Dorchester County Visitor Center and ends at William Still’s Philadelphia residence. (www.visitwilmingtonde.com)

The Delaware Historical Society consists of three major units. The museum provides an excellent orientation to the history of the state, the city and the African American presence in the area through permanent and rotating exhibits. The museum is situated inside a former 1940 art-deco Woolworth’s Store in the Historic District. (www.dehistory.org)

Displays are chronological, and begin with the presence of Native Americans 12,000 years ago. At the time of European contact, the region was home to the Lenapé Indians, who were renamed the Delaware by the Europeans. Highlights of the exhibition include a model of the 1638 Kalmar Nyckel, bearer of the first permanent European settlers to the Delaware Valley in 1638.

The Jane and Littleton Mitchell Center for African American Heritage is a series of exhibition spaces within the museum. A thematic gallery tour of “Journey to Freedom” begins with the story of Antoni Swart — known as Black Anthony — Delaware’s first recorded Black inhabitant. He was captured in 1638, landed at Fort Christina in 1639 and was assistant to Gov. Johan Printz less than 10 years later. Additional focal points include a Civil War lottery wheel, an original Mason-Dixon boundary stone and a must-see display on the regional abolitionist movement. The Rev. Peter Spencer’s contribution as the father of the Independent Black Church Movement and founder of the nation’s first independent Black Christian Church is also interpreted.

Wilmington’s Old Town Hall and Willingtown Square complete the complex. The Federal-style 1798 Old Town Hall has functioned as an important public space and jail. Abolitionists held meetings and hosted speakers in the hall and the basement cells were once used to hold captured fugitive slaves until they could be reclaimed. Frederick Douglass was denied permission to speak there.

Willington Square is located directly across the street and consists of four historic houses, the Cook-Simms House, the Jacobs House and the Jacob and Obidiah Dingee Houses, dating from 1748. The Square, listed on the National Register of Historic Places (NRHP), was named after Thomas Willing, who planned the city in 1731. Tours are not offered.

Thomas Garrett, a Philadelphia born Quaker, is renowned as an ardent abolitionist, ally of Harriet Tubman and tireless UGRR stationmaster. Tubman first arrived at Garrett’s home in October 1849. In 1822, he relocated to Wilmington and began operating an UGRR network that would function for 38 years. His sentiments were molded by the kidnapping of a free Black servant when he was a boy. His family rescued the woman and he and his brothers became abolitionists.

In 1848, he was brought to trial for harboring and transporting slaves, found guilty and was fined $5,400. Although financially ruined,  he continued and even magnified his activities. He is credited with aiding 2,700 freedom seekers and was Harriet Beecher Stowe’s inspiration for Simeon Halliday in “Uncle Tom’s Cabin.” Garrett’s home was located at 227 Shipley Street. He is buried on Quaker Hill in the Friends Meeting House burial ground. The existing meeting house is the third structure and was built in 1816.

“The Rocks” of Brandywine Creek were a documented fugitive landing site because they offered more privacy than the port. Harry Craige, an African American brickmaker, was a documented operative who met and transported fugitives via boat.

The 2.4-acre Tubman-Garret Riverfront Park became the home of a commemorative sculpture, “Unwavering Courage in the Pursuit of Freedom,” in 2013. The monument honors Garrett and Tubman, and is near the site of the Market Street Crossing,  the primary southern entry into the city and one Tubman was known to use. Interpretive plaques located throughout the park line the walkways. (www.visitwilmingtonde.com)

Wilmington’s Riverwalk, located along the Christiana River, is the ideal place to begin or end this tour. All of the listed sites are within walking distance and the Riverwalk itself is filled with attractions, dining and activity options.

Bank’s Seafood Kitchen and Raw Bar is a “2018 Best of Delaware” winner. The service, views and cuisine are amazing.(www.banksseafoodkitchen.com)

Bardea, an innovative Italian and Mediterranean restaurant, is a 2019 semifinalist in the James Beard Foundation’s “Best New Restaurant” category. Meals are crafted from local ingredients and made in-house. (www.bardeawilmington.com)

Wilmington is a 30 minute drive from Philadelphia and a slightly longer Septa Regional Rail ride with a station adjacent to Tubman-Garrett Park. Think accessible, affordable and exciting Wilmington for your next adventure!

The Focus Features movie, “Harriet,” will be released in November and in anticipation a new orientation film debuted in the Dorchester County Visitor Center on September 14. On September 17, the 170th commemoration of Tubman’s escape tookplace in Dorchester County, Maryland. Check out the Focus Film trailer at: http://www.focusfeatures.com/harriet.