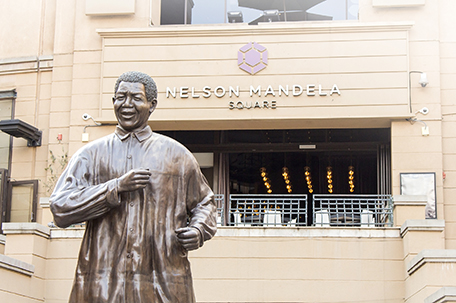 Johannesburg is not only a gateway to other regions in South Africa, it is also a portal to other countries on the African continent. The Oliver R. Tambo Airport, the largest in Africa, is welcoming, modern and easily navigated. Oliver Tambo, was the president of the African National Congress (ANC) from 1967-91. Accessibility and ease of transport make ‘Joburg’ a natural stop to rest, regroup and explore the country’s unique history prior to embarking on additional adventures.

Joburg is Africa’s second largest city and largest city in the world not built on a substantial body of water, was founded as a gold mining town in 1886 and named after Johaiin Rissik and Christian Johannes Joubert. After gold was discovered a mining industry quickly grew that brought people in from around the world, employed African workers and laid the groundwork for what would become the infamous system of apartheid.

A best bet for a comprehensive visit is the Hop On Hop Off City Sightseeing Joburg & Soweto Tour. It is regularly scheduled daily, makes nine stops that include all the major attractions and sites, features sixteen languages and is a real bargain for the money. One or two-day tickets are available. Tours begin at the Gautain Train Station.

Gold Reef City, a mining-themed park, explores the industry and heritage of mining in South Africa. The park is located on a defunct gold mine and includes thrill rides, a 4-D theater with hydraulic seats, a museum, a casino and an underground mine tour. “Jozi’s Story of Gold” tour is a must. The casino is open 24-hours and showcases some of the best live jazz performances in the region.

I must mention that Johannesburg has a zoo. Even though the surrounding regions are rife with game parks, the Johannesburg Zoo has something not found anywhere else within Africa. It is home to two polar bears and people love them.

The city has various nicknames and one of the more popular is “Egoli,” place of gold, because it is situated on the fringe of the largest known gold deposit on the planet. Originally the name referred to the gold that was found there in the 1800s, currently it references its status as the economic hub of the country. Sandton, one of the city’s neighborhoods is known as the “richest mile in Africa.” The Carleton Centre was constructed in 1973 and from its observation deck visitors can get a panoramic view of this very cosmopolitan city.

“Jozi,” yet another name, is coming into common use as more befitting of this hip, edgy, multicultural mecca. Jozi’s streets offer designs from global trendsetters as well as Rockey Street’s West African Market. A stroll here is like a walk across Africa. Many country’s wares are sold including unique works of art.

Dining around town is also highly reflective of global influences whether eating from a street vendor or indulging in a meal in an exclusive eatery. All food is fresh, locally sourced and created using combinations of spices that conjure up pictures of exotic ports. The prices are incredibly reasonable and the portions tend to be large. One must also note that South African wines are some of the best on the planet.

Constitution Hill is one of the most significant sites in the entire country and it bears witness to South Africa’s unique history in all of its incarnations. Entrance to the complex is free but some of the interior exhibits require a nominal fee. In 1896, it became the site of Johannesburg Fort, built atop a hill, and later a prison complex. Ultimately it was the location of the infamous Number 4 Prison, used to house political prisoners and known for the grueling and inhumane treatment inmates suffered. In 1909, a female prison was added, and it was there that Winnie Madikizela-Mandela was held.

Nelson Mandela was held in Number 4 while awaiting trial in 1956. Visitors can view a Mandela exhibit and his cell. Gandhi was incarcerated four times in the prison, and a bust of Gandhi was placed on the grounds in recognition of his role in South African history.

In 1995, the first justices were appointed to uphold the new constitution and a decision was reached to establish the permanent Constitutional Court on the old prison grounds. The architects captured the emerging vision of the new South Africa while showcasing the traditions and heritage that support and bind the old and the new.

The prison and court areas are linked by the “Great African Steps.” The path is built of reclaimed red bricks from the prison. The overarching theme of the complex, “Justice Under a Tree,” references the historic fact that African village justice was meted out by wise men who often met beneath a tree. The entry doors are 26-ft. high with the 27 Constitutional clauses carved on them. The Constitutional values are etched on the ceiling beams in all eleven of the official South African languages. An eternal Flame of Democracy was lit in 2012. This complex is both historically and architecturally outstanding.

A premiere photo opportunity is found in Sandton in Nelson Mandela Square. In 2004, a 265-ft. tall, 8-ft. wide bronze statue, of Nelson Rolihlala Mandela was erected. Statues of Mandela tend to pose him in a power stance. This statue depicts him with arms outstretched, embracing the world and inviting you to visit Johannesburg.