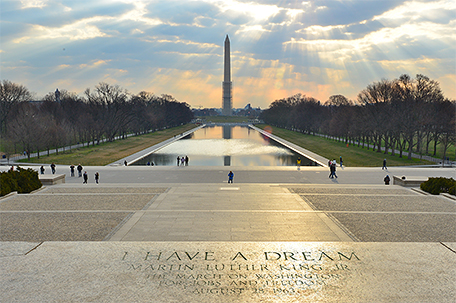 “Justitia omnibus” – “Justice for All”

George Washington surveyed and selected a place on the Potomac River to become the permanent site of the Federal Capitol. In 1790, the Residence Act made this a reality. He commissioned Pierre L’Enfant to design the city, but after one year, L’Enfant abandoned the project, taking his plans with him. Benjamin Banneker, a free African-American, recreated the plans from memory, thereby allowing the work to continue. The White House, known as the President’s House until 1901, was first occupied by the Adams family on November 1, 1800. Slaves were hired from owners to help construct the mansion. Blankets and clothing were supplied by owners. Documented free Blacks also worked as carpenters and surveyors. (https://washington.org)

The Capitol (1793) was always meant to be the centerpiece of the District of Columbia. Its location, Jenkins Hill, was specifically chosen because it allows the structure to appear to glow at sunset. In 1855, a dome and a statue for its top were commissioned. The sculptor of the statue sent the cast to the US, but he died and it appeared impossible to disassemble the statue for casting. James Reid, an enslaved foundry worker, solved the problem and the statue, “Freedom”, continues to crown the dome.  (www.visitthecapitol.gov)

For more than 200 years, “The District” has been the beating heart and soul of the country and the keeper of the nation’s history and cultural memory. Festivals, marches, protests and other events that altered history’s narrative have played out here. The more than 300-acre National Mall was designed to serve as a main thoroughfare. Today it provides access to the most viewed and visited monuments, museums and Smithsonian sites.

As the Mall is referred to as “the nation’s front yard”, the Smithsonian Institute is considered the nation’s attic. James Smithson, a Scotsman who never visited America, willed more than $500,000 in 1829 to establish the Smithsonian, now the largest museum in the world with an additional zoo and research sites. (https://www.si.edu)

Taking an Old Town Trolley tour is the best way to see as much as possible and cover great distances while in the city. Offered tours are guided, begin at 9 am and allow passengers to hop-off and re-board at 25 stops. There are red and blue routes that cover The Mall and take you to Arlington National Cemetery. The evening tour, Monuments by Moonlight, is a spectacular way to view the illuminated city. One of the greatest benefits is that visitors can explore sites that tend to be underappreciated. (www.trolleytours.com/washington-dc)

The National Museum of African Art is dedicated to the traditional arts of sub-Saharan Africa.

It was established in 1964 and became part of the Smithsonian in 1979.

The museum’s collection is representative of 900 distinct African cultures. “Good as Gold: Fashioning Senegalese Women” is an outstanding exhibition focusing on the cultural significance of gold, including mining, trade and gold as a symbol of power, beauty and self-expression. #goodasgold

“Gordon Parks: The New Tide, Early Work 1940-1950” is on exhibit in the National Gallery of Art until February 18. His works are a window into an era as is Dawoud Bey’s “The Birmingham Project” in an adjacent gallery. The gallery is housed in two buildings and has a collection of European and American Art from the Middle Ages to the present. (https://www.nga.gov/exhibitions/2018/gordon-parks-the-new-tide-1940-1950.html)

Strong women have always carved a place for themselves in DC and one of their iconic sites, the 1929 National Woman’s Party headquarters, is now the Belmont-Paul Women’s Equality National Monument.

You will gain a new respect for the postal service after a visit to the National Postal Museum. Exhibits feature the history of postage stamps and a timeline of the postal service in America through interactives, videos, artifacts and text. Visitors can enter a train mail car, walk the original mail route and examine artifacts from famous crimes involving the postal service, including the Unabomber’s handcuffs. Currently on display is “John Lennon: The Green Album”. As a boy Lennon collected stamps and his album contains 565 stamps on 150 pages. This is a hidden treasure. (www.si.edu/Museums/postal-museum)

The Korean War Veteran’s Memorial commemorates the soldiers who fought there. The war was the first without racial segregation and the 19 sculptures when reflected on the wall add up to 38 representing the 38th Parallel. There are twelve White, three African-American, two Hispanics, one Asian and one Native American sculpted soldiers.

Nearly 10,000 women served in Vietnam. Their service is commemorated with the 1993 Vietnam’s Women’s Memorial. Located near the Vietnam Veteran’s Memorial Wall, the 6’8” bronze sculpture depicts a seriously wounded soldier assisted by three servicewomen.

The National Portrait Gallery displays portraits of noteworthy women and men, including the U.S. Presidential portraits. One highlight of the collection on exhibit is Nelson Shanks’ life-sized painting, “The Four Justices”, of female Supreme Court Justices O’Connor, Kagan, Sotomayor and Ruth Bader Ginsburg. Two of the most famous portraits are those of Michelle Obama by Amy Sherald and Barack Obama by Kehinde Wiley. I suggest you be there when the gallery opens and head straight to the third floor for comfortable viewing. Do not miss the symbolism in Michelle’s portrait, especially in her patterned dress. (www.nps.gov/bepa/index.htm, #myNPG)

Eaton House, which opened in September 2018, easily rises to a level of innovation and creativity that is designed to foster environmental, artistic, global and community awareness and to inspire guests to seek their loftiest goals through personal interaction. It is comprised of five individual parts: Hotel, House, Media, Wellness, and Impact.

Public spaces are designed to facilitate mingling and free exchange of ideas. Live performances, an Eaton Radio community program and DJ mixes, offered as well as art, create a spectrum of mediums.