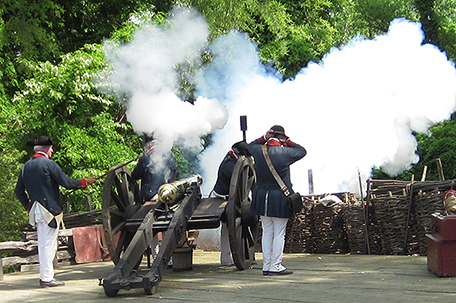 There are many lessons to be learned from the musical “Hamilton,” not the least of them the fact that history is always viewed through the lens of the narrator and those who benefit from its lessons have an obligation to check for accuracy and truth. Hamilton’s lyrics remind us that it matters “who tells your story” and that “history has its eyes on you.” March 23rd – April 4th the Grand Opening of the American Revolution Museum at Yorktown (ARMY) will take place. The museum complex, located within America’s Historic Triangle, brilliantly weaves together all aspects of the American Revolution into a holistic story. It takes visitors on a journey that results in an understanding of the impact of the American Revolution internationally and on our current political situation. http://wwwAmericashistorictriangle.com

The grand opening celebrates the original 13 colonies, with a day dedicated to each one, devoted to the unique history, musical performances, official activities and presentation of the state flag. The honors are scheduled in the order in which the states ratified the Constitution, beginning with Delaware, followed by Pennsylvania on the 24th.

The state-of-the-art museum interprets the revolution’s story from the nation’s founding through the ratification of the Constitution and its influences. The 22,000-sq.-ft exhibition space tells the story from numerous perspectives, including Native American, women and the enslaved, using text, videos, nine interactive computer kiosks, more than 495 artifacts and dioramas. http://www.historyisfun.org/yorktown-victory-center

Self-guided tours begin with “Liberty Fever,” a 4-D theatrical experience complete with special effects. Re-enactments in the film depict the points of view of five individuals including a Catawba Indian and a free black hero of the Battle of Great Bridge. One of the opening sequences shows the Boston Massacre death of Crispus Attucks, a black man considered to be the first to die in the Revolution. Additional films are shown in locations appropriate to their subject matter, a tavern, a military tent and digitally accessed trails can be found online. 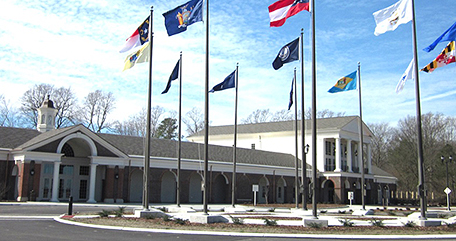 Thematic gallery tours immerse you into five primary themes, The British Empire and America, The Changing Friendship: Britain and North America, Revolution, The New Nation and The American People. Highlights of the tour include a portrait of King George III, one of the first portraits of an enslaved African, Ayuba Suleiman Diallo, Lafayette’s pistols and the earliest portrait of an African in North America, that of Olaudah Equiano. It should be noted that at the time of the American Revolution 25 percent of the people here were of African descent, 50 percent were British and 25 percent were from other areas of Europe.

A living-history Continental Army encampment and colonial farm, modeled after the documented Moss farm, are located on the exterior adjacent to the museum. The encampment interprets the experiences of two companies and includes artillery displays, an earthen kitchen, women’s area, colonel’s quarters and surgeon’s tent. The farm, circa 1757-86, was home to a slave-owning landowner with a 14 X 16-ft. house, exterior kitchen, slave cabins and herb garden. Re-enactments, demonstrations and interpretations of both sites on various topics are scheduled throughout the day. All displays are reproductions allowing visitors to personally interact with history. A complete menu of events and upcoming exhibitions is available online. 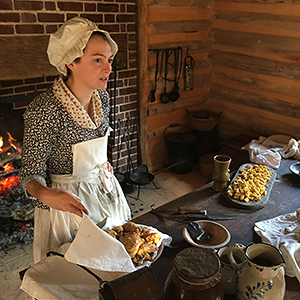 Although the Revolution lasted two years beyond the victory at Yorktown on October 20, 1781, the decisive win essentially ended the war and many historians deem this the most significant battle of the war. The Yorktown Battlefield is situated on the original battlefield where the allied forces of America and France defeated the British. Visits begin with a video introduction to the battle and a self-guided tour of exhibits located inside the visitor center. Sites on the Encampment Tour Road include campsites, Washington’s Headquarters and the negotiation site, the Moore House. https://www.nps.gov/york/index

Yorktown was founded in 1691 as a port city to promote area growth. Little remains of its colonial appearance but there are locations worth visiting. Grace Episcopal Church dates from 1697 and survived both Revolutionary and Civil War battles. Historic houses include the 1730 Georgian Nelson House, the 1760 Tidewater Virginia Dudley Digges House and the 1726 Customhouse. Yorktown Victory Monument, erected in the 1880s was commissioned in 1781 by the Continental Congress to honor the battle. The 98-ft. tall monument is adorned with 13 female figures, four sets of emblems and inscriptions and overlooks the York River.

There are numerous options for exploring the Yorktown area. Canoes, kayaks and bicycles can be rented and river charters are scheduled in season. Patriot Tours & Provisions leads a guided Segway Tour through the historic areas. Reservations are strongly recommended.

Following the Williamsburg Tasting Trail (WTT) is a unique way of touring the Historic Triangle. The Williamsburg Trail consists of eight locations that feature a variety of spirits, dining, tours and tastings. The WTT intersects with the Colonial VA Wine Trail that showcases three additional venues. All trail sites are within a one-hour drive of Yorktown. www.williamsburgtastingtrail.com

Wyndham Garden Williamsburg is ideally located to access all of the sites within the Jamestown-Yorktown-Williamsburg Historic Triangle. The hotel has all of the amenities and free WIFI, daily newspaper, pool, fitness center, free parking and on-site dining. Specials are available online. https://www.wyndhamhotels.com/wyndham-garden/williamsburg-virginia

Virginia’s Historic Triangle is a four hour drive. Many believe it is where American freedom was born, the fulfillment of many of the ideals set forth in Philadelphia. The stories told here are related in an inclusive way that facilitates our ability to have our eyes on a richer, more holistic view of history. https://www.virginia.org