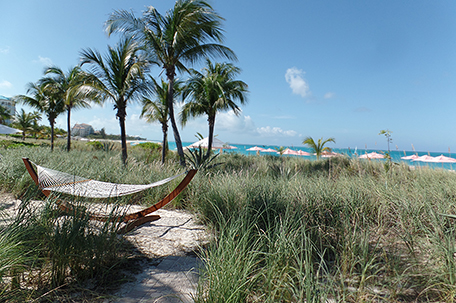 Turks and Caicos Islands is an archipelago of pearls strung out south of the Bahamas and 600-miles from Florida. The eight large — and more than 90 smaller islands — are situated on a plateau, surrounded by the Atlantic Ocean and a pristine barrier reef. Two distinct island groups make up this British Overseas Territory. Turks Islands includes Grand Turk and little Salt Cay, and Caicos Islands comprised of East, West, North, South, and Middle Caicos. Of these only five of the large islands and a few little ones are inhabited, offering visitors a huge number of deserted beaches and cays to choose from for an even more private getaway.

TCI is renowned for its plethora of outdoor and adventure options, fine dining and the breathtaking beauty of the water and beaches and is often credited with having some of the most gorgeous beaches in the world. The water temperature varies a mere 8 degrees, 74 to 82, between winter and summer and the clarity and turquoise shades are always stunning. The beaches owe their fame to the fact that the sand is soft and is formed from broken down limestone, shell and coral, making it powdery, white and occasionally rosy-hued.

The islands are unique in ways including a history that is not duplicated on any other Caribbean island. The first inhabitants were the migratory Taino Indians, followed by the Lucayans beginning in 750 AD. The oldest extant artifact, a canoe paddle, dates from around 1100 AD. Some say that Columbus landed on Turks and Caicos in 1492 and documents prove that Ponce de Leon landed in 1512. The entire native population was enslaved and forcibly removed to work on other islands by 1513. Around 1700, the islands were settled by salt workers from Bermuda and pirates like Anne Bonney and Black Jack Rackham. Salt production was the foundation of the island’s economy until the 1900s. The salt was so superior that George Washington requested it for use by the Continental Congress.

Legend has it that Turks was named after the Turk’s Head cactus, so called because it resembles a fez. Caicos was derived from the Lucayan words, cayo hico, and the words for ‘string of islands.’ Pirates were referred to as Turks and the name served as a warning to beware the pirate islands. 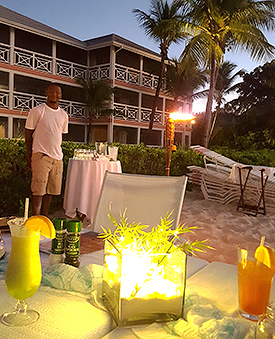 After the American Revolution, British Loyalists left the United States and were given land on the islands. Many of the new settlers brought their slaves with them, and established cotton plantations. When slavery became illegal in the British territories in 1834, the slaveholders simply vacated their plantations. The former enslaved workers took over ownership of the properties and many of their descendants continue to live on inherited property.

Grace Bay, on the northern side of Providenciales, is home to 12-miles of beach sheltered by a barrier reef less than 2,000-ft. offshore. The coral reef makes it great for diving and its location makes it ideally situated to serve as a hub from which to launch excursions and all the activities that Turks and Caicos has to offer. Two all-suite properties a mile apart, Ocean Club & Ocean Club West, are a wonderful choice for accommodations. (www.oceanclubresorts.com)

The spacious suites are noted for offering all the comforts of home along with deluxe amenities and excellent service. The expansive properties feature the “Stay at One, Play at Both” program that allows guests to use the facilities at both resorts. Amenities include a menu of eco-tours, golfing, snorkeling, diving, cycling, other activities and an Excursions Concierge. Dining options at the resorts include Solana, Seaside Café, Cabana Bar & Grill and the fine-dining establishment, Opus Wine Bar Grill.  The on-site, Spa Tropique, is noted as the best spa facility on the island. (www.spatropique.com)

Horseback riding along the beach is a wonderful experience. Riders get to plunge into the surf and experience the sea in an entirely new way. Rides are either 60 or 90 minutes long and must be arranged in advance. Provo Ponies was awarded a TripAdvisor Certificate of Excellence in 2016. (www.Provoponies.com)

The only conch farm in the world is located on Turks and Caicos.  Tours are offered and begin with a comprehensive overview of the farm’s work and continue to the tanks and growing ponds. You end in the gift shop where you can purchase shells, jewelry and other related items. (www.caicosconchfarm.net)

Although Turks and Caicos is in the Atlantic, it is culturally Caribbean, and the best way to experience the culture is to embark on the “Heart of the Islands” tour that exposes visitors to the people and sites of North and Middle Caicos. The 8 hour tour begins with a 30-minute private boat ride. Stops include Flamingo Pond Nature Reserve, Conch Bar Caves National Park, Mudjin Harbour, lunch at Frank’s, a local restaurant and, Wade’s Green Plantation. The caves are the most extensive aboveground system in the region.

Mudjin Harbour is a corruption of Bermuda Harbor, once used to dock ships from Bermuda carrying goods, including slaves. Undoubtedly some of these slaves were taken to Wade’s Green Plantation. The Green Plantation, one of three left on the island, is the best preserved. The land was given to Loyalist Wade Stubbs in 1789. He began a cotton plantation on 860-acres and held 384 slaves. It lasted until 1809.

A walking tour takes you along a stone-fenced pathway. The fence and the hand-cut limestone structures were constructed with slave labor. Highlights of the tour include the ruins of  the Great House, the Garden, the Overseer’s House and the Slave Quarters. (www.tcnationaltrust.org/Wades-Green-Plantation)

Big Blue Unlimited offers this and a menu of other tours. Reservations can be made online. (www.bigblueunlimited.com)

Sun Charters is the Grace Bay operator of choice for private charter cruises. Guests sail aboard the Atabeyra while soaking up the sun and scenery with stops for snorkeling and sunset viewing. Snacks and drinks are provided, the service is exemplary and the voyage is customized for the group. (www.sailatabeyra.com)

Turks and Caicos is so special that it is, of course, a destination for the rich and famous. Keith Richards has a villa, Justin Bieber visits often and Nicki Minaj celebrated her most recent December birthday in the islands. While visiting the celebs participate in regular island activities.

Da Conch Shack is a must. Conch is served in a variety of ways and you can watch as it is pulled from the water. Outdoor, beach dining, enhances the meal. It has been featured on CNN, The Travel Channel and BBC. (www.daconchshack.com)

The Thursday Night Fish Fry is a weekly gathering of islanders and guests. Entrance is free and the outdoor venue is filled with food stalls selling the best of the island cuisine as well as souvenir and gift items. There is a Junkanoo Parade and entertainment. Famous performers have been known to take the stage at this celebration of culture and all things Turks and Caicos. (www.visittci.com)