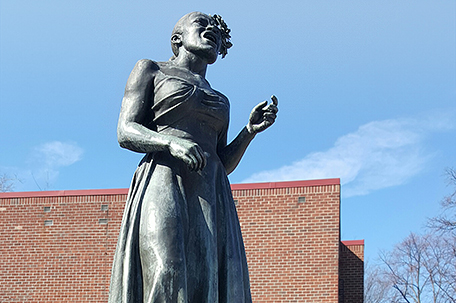 “Somebody once said we never know what is enough until we know what’s more than enough.”   –Billie Holiday

Between 1762 and 1801, John and Abigail Adams penned more than 1,100 letters to each other. In the most famous of these letters, posted to Philadelphia and dated March 31, 1776, the future FLOTUS gently advises John, “And, by the way, in the new code of laws which I suppose it will be necessary for you to make, I desire you would remember the ladies and be more generous and favorable to them than your ancestors. Do not put such unlimited power into the hands of the husbands. Remember, all men would be tyrants if they could.” Despite her verbal prodding, the playing field was not leveled and the struggle for gender equality has continued long after the ratification of the 19th Amendment giving women the vote in 1920.

Women’s History Month was created to celebrate, honor and infuse the stories of the women who have contributed to the history and heritage of the nation. Their achievements transcend eras, levels of resistance and personal endurance and tenacity. President Jimmy Carter designated a Women’s History Week in 1980, and seven years later Congress named March National Women’s History Month.

Billie Holiday is not, at first glance, a traditional Women’s History Month honoree, but on closer examination she is worthy of our attention and praise. She suffered the stigmas of poverty, racism, addiction and gender inequity, yet managed to create an enduring legacy of music and become a seminal jazz figure profoundly impacting the genre.  (http://www.billieholiday.com/)

In many ways, following her trail is not that difficult because she was popular and widely lauded in her lifetime. The difficulty in tracing her comes with the fact that there are a great many myths about her, and at times even she either altered or omitted portions of her life story. By most accounts, she was born in Philadelphia General Hospital, in West Philadelphia, to a 13-year-old mother and named Eleanora Fagan on April 7, 1915. Her mother returned shortly thereafter, with her baby, to the Fell’s Point area of Baltimore where she worked as a maid.

At the age of nine, Holiday was sent away because of truancy and spent seven months in a home. The following year, she was sexually molested by a boarder at the home, then arrested and jailed. After her mother obtained her release, she worked as a maid in a “house of ill-repute,” where she was able to listen to their music. She auditioned as a dancer in 1932 in a nightclub on Pennsylvania Avenue, Baltimore’s segregated African-American entertainment district, but performed so poorly that she switched to singing. She was hired and went on to become renowned as “Lady Day,” a jazz phrasing innovator and early musical influence. She changed her name to Billie after her favorite movie star Billie Dove and the surname of her guitarist father, Clarence Day. Musician Lester Young is said to have dubbed her “Lady Day” based on her cultured demeanor. She reached the height of her fame in the 1950s. Her most famous recording is “Strange Fruit,” an anti-lynching song that captures the despair of the era. 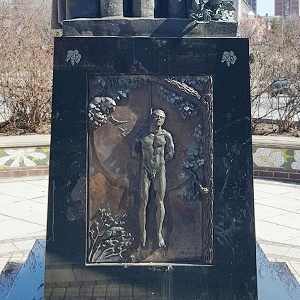 Billie and her mother lived in many Baltimore houses including 432 Colvin Street. She was living at 219 S. Durham when she was assaulted and later her mother moved to 217. At one point, her mother managed a restaurant at 1325 Argyle Ave. (www.visitbaltimore.com)

Inside the Reginald F. Lewis Museum of Maryland African American History and Culture, Holiday is highlighted with a gallery display. Visitors are presented with an overview of her life and music and provided an opportunity to better understand her place in the history of American music. http://www.rflewismuseum.org

The Pennsylvania Avenue Entertainment District is home to the site of the famous Royal Theater, where Holiday sang, and the Billie Holiday Monument. Interpretive signs at the theater site discuss the artists who played there and its relevance to the community. Directly across the street a sculpture of Holiday in mid-song, gardenia in her hair, stands on a base with carved bas reliefs referencing her songs “God Bless the Child” and “Strange Fruit.” A crow perched on a corner tears apart a gardenia, representing the legacy of Jim Crow and its effect on Billie Holiday. www.pennsylvaniaavenuebaltimore.com

Most of Philadelphia’s sites directly connected to Holiday no longer exist.  She performed in many of the jazz clubs here after her Cabaret Card, a license to perform in New York, was taken because of her drug abuse. Philadelphia recognizes “Lady Day” with a marker on 14th & Lombard Streets and a plaque on the Walk of Fame in 2015.

Her career was marred by chronic and extensive heroin abuse and in May of 1959 she collapsed during a performance in Greenwich Village that was to be her last. She died in New York on July 17, 1959 at the age of 44 in Metropolitan Hospital. At the time, she was under arrest for possession after a nurse discovered the heroin she had hidden in her hospital bed. She died nearly penniless due to financial mismanagement by mates and personal managers. She had been living at 26 W. 86th Street.

Thousands of people attended the legendary singer’s funeral, which took place at St. Paul The Apostle Roman Catholic Church, on 60th Street and Columbus Avenue in New York. She is interred in New Saint Raymonds Cemetery, 2600 Lafayette Avenue, in the Bronx.

To hear Billie Holiday sing is to feel her pain and that of others who endure the unendurable. Her life bears testimony to the universality and uniqueness of women’s quest for equal treatment and the right to develop beyond traditional boundaries. (http://www.visitphilly.com)