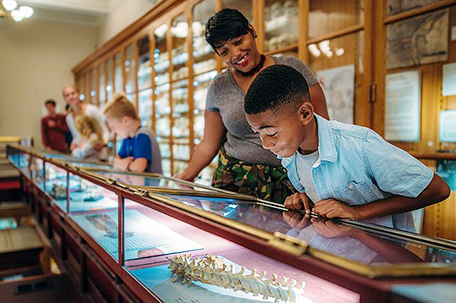 ABOVE PHOTO:  At the Mütter Museum, thousands of items on display span the medical realm, from deformed and diseased body parts to the death cast of “Siamese twins” Chang and Eng to pieces of Albert Einstein’s gloriously nerdy brain. The museum is also home to the outdoor Benjamin Rush Medicinal Plant Garden, named for the Declaration of Independence signer and college founder.  (Photo: J. Fusco for VISIT PHILADELPHIA)

A few of Franklin’s better known accomplishments include organizing the first volunteer fire company, creating the first public library, becoming the Continental Congress’s first Postmaster General and inventing bifocals, swim fins, lightning rods, the Franklin stove, library stepstool, odometer, writing chair and a urinary catheter. He was also a printer whose company printed all the colonial paper currency for Pennsylvania and Delaware. Because of this the colonists referred to bills as “Benjamins”. In 1929, his portrait was placed on the $100 bill. The Benjamin Franklin Museum and Franklin Court sites relate the story of his life and ongoing legacy. (www.visitphilly.com) 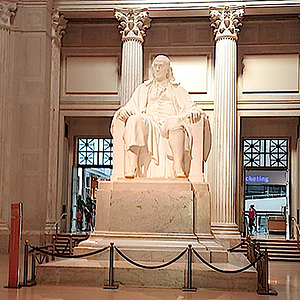 As if Franklin’s political positions and inventions were not enough, he was a partner, along with Thomas Bond, in founding the first hospital in the country in 1751. Pennsylvania Hospital was established to treat the “sick-poor and insane”. A temporary hospital was replaced by a permanent structure in 1755 at its current location at 8th & Pine.

Franklin was erudite, inquisitive, adventurous and fun loving. He would enjoy seeing the city’s progress and testing out more than 200-years of scientific advancement. There are sites and entertainment venues that I am certain would lure him that all native Philadelphians and visitors also find unique

Franklin laid the groundwork for Philadelphia to become a leader in the medical field and in 1787 24 physicians established The College of Physicians of Philadelphia, now the oldest medical society in the nation. The goals of the College are to establish professional standards and create opportunities for the dissemination and exchange of medical information. (www.collegeofphysicians.org)

In 1858, Dr. Thomas Dent Mütter donated his 1,700-piece collection and $30,000 for the establishment of a medical museum with the stipulation that a curator be hired, a lecture series be instituted and a fireproof building be constructed to accommodate the collection and expansions. The original museum opened in 1863 and relocated in 1909 to 19 S. 22nd Street. In 1937, a medicinal plant garden was added and in 2009 it was designated a Historic Landmark. Today the Mütter Museum of The College of Physicians of Philadelphia’s 25,000-object collection is internationally renowned and has been featured on television, novels and movies. (www.muttermuseum.org) 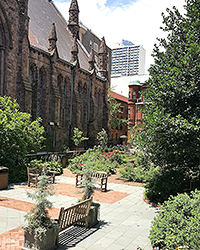 The Mütter Museum is open daily from 10 AM until 5 PM and you should plan to stay at least two-hours. Tours of the 10 viewing areas and galleries and the garden are self-guided and maps are available at reception.

Highlights of the collection are too numerous to list but there are objects that are not to be missed. Dr. Thomas Harvey removed Einstein’s brain, without permission, at autopsy. He made 1,000 microscopic slides and found that it weighs less than the normal brain and the inferior parietal region is 15 percent large than normal. The family later granted permission and a portion of his brain is on display in the main gallery. A torso cast of Chang and Eng Bunker Siamese twins, the 7’6” Mütter American Giant, the tallest skeleton on exhibit in North America, a specimen from John Wilkes Booth’s vertebra, over 1,000 historical medical photographs, the Hyrtl collection of 139 skulls and the Dr. Chevalier Jackson collection of 2,000 swallowed items are all on view.

In 1824, a group was moved to found The Franklin Institute of the State of Pennsylvania for the Promotion of the Mechanic Arts to honor both the achievements and spirit of Franklin’s commitment to scientific education and inquiry. Women and African-Americans were initially not allowed membership in the institute. The first African-American member, O. V. Catto, was admitted in 1870.  In 1934, The Franklin Institute relocated to Benjamin Franklin Parkway. The iconic museum teaches science through intergenerational and creative activities and displays. 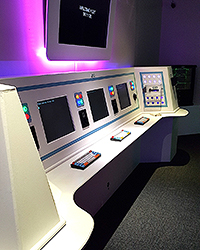 The newest addition to the Franklin Institute’s menu of unique activities is the Franklin Institute Escape Rooms. The 4,000-sq. ft. rooms are the first in a science museum worldwide and the largest and most technologically advanced. There are two from which to choose, Island Escape and Intergalactic Escape. These live action immersive puzzles combine use of personal skills, code breaking, science, music, lighting, computer terminals and pop culture references. Escapes are 60-minutes long and accommodate groups of 6 to 14. A separate admission is charged and reservations are encouraged. Many people believe Franklin was also a spy and with his skill set he would have loved this activity. #franklininstitute

Franklin Square is presenting a free summer movie series through August. The fun and games begin at 7 PM and the film begins at 8:30. Franklin visited Betsy Ross on Arch Street, and visitors can now attend the Betsy Ross House First Friday Movie Nights Under the Stars & Stripes until September 1st. Movies are shown on Fridays at 5 and admission includes a house tour and pre-show activities. (www.historicphiladelphia.org)

Although at one point Franklin owned slaves, he later became an abolitionist and in 1787 he became President of the Pennsylvania Society for Promoting the Abolition of Slavery. Three years later, his final public act was to petition Congress for the Society to abolish slavery and end the slave trade. His final tour stop might be a visit to the African American Museum to assess how successful the cause of abolitionism had been. (www.aampmuseum.org)