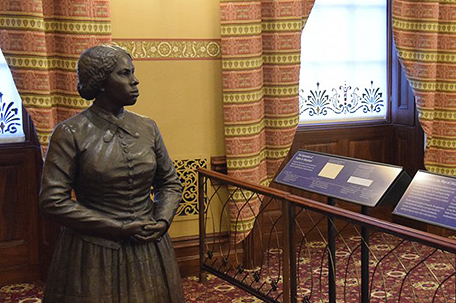 African Americans served as spies during the American Revolution with the belief that their service would prove the loyalty of the people, improve their condition and for the ever present promises of freedom. However, the status of African Americans largely did not change as a result of their service. Neither side kept their promises.

African Americans amazingly clung to those same beliefs during the Civil War, and once again the Black Dispatch set to work gathering information. Again, they used their marginalized status and their perceived ignorance, both of which would be their greatest assets.

Mary Elizabeth Bowser’s contributions to the war effort were so awesome that she was inducted into the Military Intelligence Hall of Fame in 1995. Bowser was born enslaved to the Richmond Van Lew family. Elizabeth Van Lew, the daughter, was an abolitionist and pro-Union who freed Bowser and sent her North to be educated.

When war broke out, Elizabeth pretended to be odd, earning the nickname of “Crazy Bet,” all the while establishing the Richmond Underground spy ring. She asked Bowser to return to Richmond, where she posed as an uneducated housekeeper and was hired to work in the Confederate White House for Jefferson Davis’s wife, Verina.

Bowser listened to conversations and used her photographic memory to read, memorize and recall documents. After the war, Elizabeth had all official records expunged to avoid retaliation.

The American Civil War Museum and White House of the Confederacy offer daily tours. It has been restored to its appearance during the time of Jefferson Davis, August, 1861 until April 2, 1865. Many of the furnishings were used by the Davis family. (www.acwm.org)

Jefferson Davis’ coachman, William Jackson, was also a household spy. There is documentation that he gave information so important it was passed on to the War Department. He crossed into Union lines in 1862 to Fredericksburg to deliver the information. Driving tours of the battlefield are clearly marked. (www.fredericksburgva.gov)

Fort Monroe was the site of many momentous events. It is there that escaped slave George Scott shared information with Gen. Benjamin Franklin Butler regarding a planned Confederate attack on Newport News he gathered during his escape. This led to several missions behind enemy lines.

Charlie Wright escaped from Culpepper, Virginia in 1863 and upon questioning they found he had a remarkable memory for details. He informed the Union that troops were headed into Maryland. Based on Wright’s intelligence, Gen. Joseph Hooker shadowed the Confederates and protected Washington DC from Lee’s forces, held the better ground and led to the Battle of Gettysburg. (destinationgettysburg.com)

John Scobell was a Mississippi slave whose master educated and freed him. In 1861 he became one of several Black Pinkerton agents. He was a master of disguise and often posed as a servant to a White operative to gain information from other Black workers. He employed the aid of the Legal League, a secret Black southern organization working to free slaves and provided intelligence on troop movements, numbers and fortifications.

Dabney — known only by his first name as was the custom — and his wife fled the Confederacy and began to work for Gen. Hooker. His wife soon returned south to work in a household as a maid. Dabney began providing incredibly accurate intelligence. When questioned he told the officers that he and his wife sent signals using the positions of the laundry on her line that could be seen from Hooker’s headquarters.

Mary Touvestre was the engineer of the ironclad Merrimac’s housekeeper. She stole the blueprints, left Norfolk and gave them to the US Sec. of the Navy. The Union then sped up the building of their ironclad ship, the Monitor.

Robert Smalls was born in Beaufort in 1839 and was taken to Charleston in 1851 and rented out. He worked on the Confederate troop ship CSS Planter. On May 13, 1862, he put his family and Black crewmen and their families aboard while the white workers were ashore.

He donned the captain’s clothing, sailed out of Charleston Harbor and surrendered the ship to the Union. He was awarded a $1,500 bounty. He became captain of the Planter in 1863 and in that same year met with Lincoln. His home and burial site are in Beaufort. (www.beaufortsc.org)

Less is known about Harriet Tubman’s role as a troop commander and spy than her work on the Underground Railroad, but her war work is as astonishing, if not more so. She and Colonel James Montgomery planned to raid rice plantations and liberate slaves along South Carolina’s Combahee River. In June 1863, she led three gunboats of Black soldiers down the river. Tubman successfully avoided Confederates and torpedoes due to information she and her spies had gathered.

These “commandoes” torched plantations, destroying food and supply sources, burned bridges disrupting transport, and freed more than 700 people. She sent word ahead that when the boats came they would carry them to freedom and the enslaved people met them and clambered aboard. Approximately 100 of the men later joined the union forces.

Tubman’s wartime salary was $200. She later received her husband’s veteran’s benefits and was to be paid for her nursing services. She did not receive the money owed her until 2003 when Sen. Hillary Clinton heard the story. The benefits, adjusted for inflation, of $11,750 were paid to the organization that administers her Auburn home.

A statue of Harriet Tubman was placed in the Maryland State House in Feb. 10, 2020 in Annapolis in the Old House Chamber, the room where slavery was abolished in Maryland in 1864. (#visitMaryland)

Blacks never fail to answer the call, even outside of America’s borders. International entertainer Josephine Baker,  — known as “The Black Pearl” –, volunteered to spy for the French Iintelligence Agency. She trained to shoot with a group of guerrilla patriots called, the Maquis, but her greatest strengthss kills were her charm, cleverness, nerve and the art of seduction. She gathered information and sent it to contacts,  including Gen. Charles de Gaulle.

While touring, she carried messages in invisible ink on her sheet music and sewn into her hems. She also served as a Red Cross nurse and piloted her private plane filled with supplies. She was awarded the Croix de Guerre and De Gaulle personally presented her with the gold Croix de Lorraine. Her home in France offers tours. (www.lesmilandes.com).

Smooth Traveler: The Black Dispatch: Spying While Black (Part One)