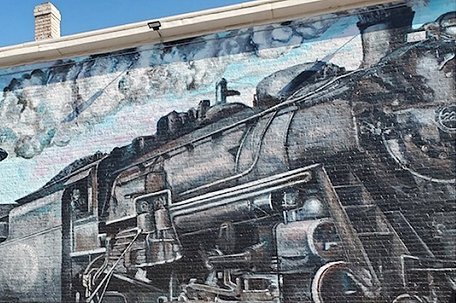 In 1607, a group of 105 people led by John Smith established a permanent Virginia colony, named in honor of Queen Elizabeth I, at Jamestown on land inhabited by Native Americans. A colony, also established by the Virginia Company, was to become Richmond, situated on the fall line of the James River.

The area was inhabited quickly because of its accessibility to transport. In 1670 William Byrd inherited land from his uncle and in 1670 the General Assembly added to his holdings and he created a trading network near the falls. Byrd II founded a town in 1733.

It was named Richmond after the city in England it was said to resemble, and was incorporated as a town in 1742. The General Assembly relocated the state capital from Williamsburg to Richmond in May 1779.

Richmond, by virtue of its longevity, has always been central to the history of the United States. There are a vast quantity of historic sites, restaurants and accommodations but I suggest that travelers visit the nearby small towns and communities to more fully experience Virginia. Two great places to start are Short Pump and Ashland.

Many towns sprang up along roadways and Short Pump is no exception. Robert H. Saunders, a revolutionary soldier, opened a tavern beside Three Notched Trail, now Broad Street, in 1815. The trail linked Richmond and Charlottesville and legend has it that Thomas Jefferson stayed there on trips to Monticello.

On the tavern’s exterior, the owner had a porch enclosed water pump for stagecoach horses. The size of the porch hampered the pumping and so Saunders shortened the pump. The pump became iconic and soon people were meeting at the “short pump.”  When the turnpike was built at the intersection of Pump Road and Saunders’ Tavern, the juncture was officially deemed Short Pump.

For more than 200 years, Short Pump has been a place to meet, eat, quench your thirst and be entertained. The Short Pump Town Center Mall is a landscaped marvel of winding paths, water features, children’s areas, fireplaces, secluded seating options and even offers train rides aboard the Short Pump Express. Visitors can also avail themselves of several unique activities in the area.

You could really spend your entire vacation in Chocolates by Kelly. The shop offers exquisite handmade chocolates, as well as classes and special customized chocolates for any occasion.

A multi-generation chocolatier, Kelly enhanced her natural gift with lessons from her great grandmother, who was a master chocolatier for Wanamaker’s in Philadelphia.

You can order online but the aroma, the taste, the ambiance and the warmth of Kelly’s personality make this a must visit. (www.chocolatesbykelly.com)

Boomerang Air Sports gets you off the ground in a variety of ways. On offer are 13,000 square feet of trampolines, a Zip Line, Slam-Dunk Basketball, High Level Ropes Course and a chance to channel your inner  hero on the Ninja Warrior Course. This is a great place for small families or large groups. (www.boomerangairsports.com)

Even adventurers have hobbies, and Painting With A Twist allows you and your friends and family to experience a walk on the artistic side. No experience is necessary, and guests can consume snacks and beverages while they create a work of art along with a resident artist. Classes and parties can be scheduled. (www.paintingwithatwist.com/studio/richmond-short-pump/)

Who knew the “Center of the Universe” was Ashland, Georgia, right outside of Richmond? Ashland was the quintessential railroad town. The railroad created Slash Cottage Mineral Springs in the 1840s, and soon after began to sell building lots adjacent to the tracks.

The one-mile town was incorporated as Ashland, named after Henry Clay’s Kentucky estate, in 1858. During the Civil War, a Confederate cavalry training camp was established there and in 1868, Randolph Macon College was relocated there.

Modern Ashland, a seven square-mile college town, has a downtown that displays architecture from 1865 through1919. More than 200 homes and businesses are listed on the National Register of Historic Places.

Walking tours should begin in the Ashland Museum, founded in 2008, for a visual orientation to the town and its history. A restored 1926 Red Caboose on the grounds is  also open for tours. (www.ashlandmuseum.org)

The Henry Clay Inn was named in honor of Clay, who was born in the county. He was a politician and a three-time presidential candidate. The inn opened in 1992, and has thirteen beautifully furnished guestrooms.

The inn exhibits a stunning collection of baseball paintings in the dining area and the Hanover County Black Heritage Society is housed on the premises. The inn is available for meetings and weddings. (www.henryclayinn.com/history)

Situated in the heart of downtown is the 1891 Tinder Guesthouse, a private B&B with a 3-bedroom suite, 2 baths and a game room. It is ideal for a family vacation of friend’s getaway. (www.tinderguesthouse.com)

Located directly across from the tracks on Railroad Avenue, Tiny Tim’s Trains and Toys is a delight for all ages. Trains account for a large part of their inventory, but it is the games I found most intriguing. The store sells unique and hard to find educational games and toys that are wonderful for family time. (www.trainandtoystore.com)

Origin Beer Lab is another totally unique Ashland treasure. The facility bills itself as being “built for research, development, and teaching of all things beer.” Here they test new recipes, listen to consumer input and create and taste new products. Take the tour, taste the product and contemplate being in the “Center of the Universe.” (www.originbeerlab.com)

Maryland Black History Month Programs honors Douglass and Tubman. On February 15, 2020, beginning at 10am and running through 3pm, Gov. Larry Hogan will unveil statues of Douglass and Tubman in the Maryland State House, Annapolis. Maryland. (www.visitmaryland.org)

Germany is off to a fresh start into the new decade by gathering a full calendar of Beethoven events throughout the year. The 250th anniversary of the composer is going to take center stage all across the country. (www.germany.travel/en)