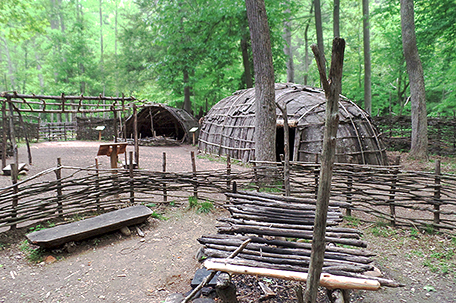 The Shenandoah received its name, “Clear-Eyed Daughter of the Stars,” from a Native American legend. It was said that to honor the beauty of the valley the heavens blessed the waters with some of the luminosity of the stars to make them even more lustrous. The first nonindigenous people to view the valley were English settlers in 1716 and within 20-years immigrants, mainly from PA, moved into the region. They followed an established Indian path that they named the Great Wagon Road. lexingtonvirginia.com

A royal grant was given to Benjamin Borden and from that Rockbridge County was formed and named after the area’s most prominent geological feature, the Natural Bridge. The first written evidence of Natural Bridge is in 1759 and the formation was fully documented by French scientists in the 1770s. George Washington surveyed the area in 1750 and visitors can still see where he carved his name in the rock. It is designated one of the “Seven Natural Wonders of the World.” naturalbridgeva.com

The first owner of the land that included the bridge was Thomas Jefferson whose patent was registered in July of 1774. He paid 20-shillings, $24,675.70, for 157-acres of land. Jefferson constructed a 2-room log dwelling in 1802 and left a black man, Patrick Henry, as manager. One of the rooms was for guests and a book was left for guests to write comments. Henry was given land and a cabin by Jefferson and he lived there as manager until his 1829 death. Four years later the land passed out of Jefferson’s family.

Natural Bridge is soon to be designated a National Park and this is the perfect time to visit. The site includes the Bridge, Monocan Indian Living History Exhibit, Cedar Creek Trail, the Drama of Creation sound and light show and a historic hotel. The Bridge is accessed by shuttle or by taking a staircase to a ravine path that leads to the Bridge. It is an awesome sight, 215-ft.high, 60-150-ft. wide with a length of 90-ft. and an arch approximately 48-ft. thick. The path also leads to a recreated Monocan village complete with authentically dressed interpreters. Fifty-minute Cavern Tours, descending 34-stories, the deepest caverns on the East Coast, are also offered.

One of the inventions that changed agricultural history was invented in the Valley in 1831 when 22-year-old Cyrus McCormick took over a project that his father had worked on for 16-years. His mechanical reaper cut, threshed and bundled the grain using horsepower. Prior to his reaper it took one man one day to harvest three acres. With a mechanical reaper it took 1-hour per acre. He worked on perfecting it and in 1834 he was granted a patent. The reaper was not really successful, even though it replaced hours of backbreaking toil, in the Valley because of the cost and the fact that the hilly land was not conducive to its use. He moved his operation to Chicago in 1847 where he could benefit from the flat fields of the Midwest. In 1851 his invention was recognized with a medal and he and it became internationally famous. 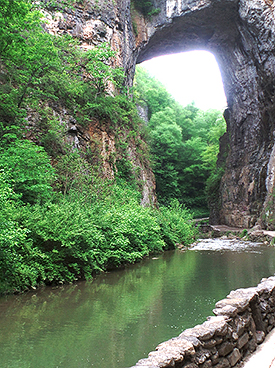 Historic Brownsburg is one of the county’s brightest gems. The entire village was listed in 1973 on the National Register based on the criteria that, based on its largely unaltered size and appearance and presents a unique picture of an early Valley village. Brownsburg was founded in 1793 and flourished until roads and the railway passed it by. At its height it was on the stagecoach line and had about 20 homes, businesses and an academy. A self-guided walking tour brochure is available that lists 20 sites with historic information and a map; the structures date from 1760 to 1928.

Tours begin in the Brownsburg Museum with emphasis on village history and that of renowned residents of Rockbridge. A real highlight is the story of Michael Miley who began his career in photography after the Civil War. He began developing a color process and in 1902 he patented the process. He gained fame as General Lee’s photographer. The museum displays one of his early color photographs.

The museum’s current main exhibit is “Grain into Gold.” It traces the general and agricultural history of the area using early tools, photographs and other artifacts. The exhibition is notable for its inclusion of all of the regional ethnic groups. The importance of regional farming and distilling are emphasized. It was the Shenandoah Valley that supplied the flour and whiskey to miners during the Gold Rush. The use of enslaved and free black workers is explored and research places them in all occupations and as important laborers in mills and distilleries. Pennsylvania’s Ned Tar is cited as the first black landowner in the early 1700s. brownsburgva.wordpress.com/brownsburg-museum

The Frontier Culture Museum is an absolute must if you are in the area. It is located in Staunton, an independent city that does not fall under county jurisdiction. This outstanding complex brings to life through demonstrations, outdoor reconstructions and live interpretations, the ethnic farmsteads from which the cultures that settled the Valley came from. The compounds represented, West Africa, England, Germany, Ireland, Native American and Virginia, are authentic and include homes, work areas and outbuildings. frontiermuseum.org

Approximately 250,000 Africans were brought to North America with 40 percent of those brought to VA from the West African Coast, most of them Igbo. The farm in the museum interprets life before removal from Africa within a free Igbo compound. Life in Africa and the African contributions to American culture, agriculture, cuisine, music, etc., are stressed.

This is a three-hour adventure and visitors can walk or rent a golf cart. A complete schedule of activities and events is available online. Virginia.org