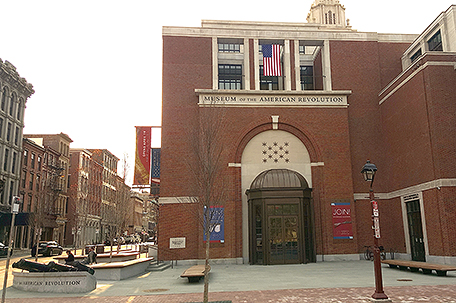 ABOVE PHOTO:  Museum of the American Revolution (Photo:Renée S. Gordon)

On the morning of September 5, 1774, 56 delegates from 12 of the 13 colonies met in Smith’s Tavern, now City Tavern, and then proceeded to Carpenters’ Hall, at 3rd and Chestnut, to determine its suitability as a good place to hold the First Continental Congress. Georgia was not represented due to ongoing negotiations with the English regarding conflict with Native Americans. Philadelphia — which had been selected as the meeting site because it was accessible by land and water — was situated in the midst of the colonies and was the largest and most significant colonial city. That first meeting was held to organize protests against Britain’s Intolerable Acts and by the time the meetings ended in October of 1774, Congress decided on a boycott in lieu of requesting independence. (http://www.carpentershall.org)

The Second Continental Congress met on May 5, 1775 after a series of aggressive actions by King George III, including the April 19th conflicts at Lexington and Concord. Two months later, a defensive Continental Army led by  Commander-in-Chief George Washington was formed. On July 4, 1776, the Declaration of Independence was ratified, and in 1783, the Treaty of Paris was successfully negotiated. Essentially, the Second Continental Congress and Philadelphia functioned as command central for the duration of the Revolution and the years beyond. (http://www.visitphilly.com)

On April 19, 2017 Philadelphia’s newest venue, The Museum of the American Revolution, opened in the heart of the Historic District, 242 years after the “shot heard round the world” was fired at Concord, MA. This event changed the world forever and echoes down the corridors of history. 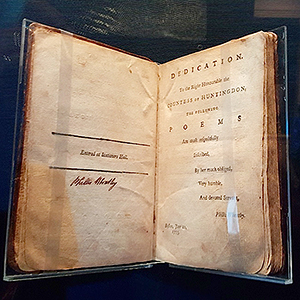 The estimated colonial population was 2.5 million, with 450,000 being of African descent. Slavery was legal in all 13 colonies, but there was always a small population of free Blacks. By war’s end, 1,000 Blacks had served with the British on promise of freedom, and 5,000 with the Continentals. The full scope of the African-American contributions to both sides is explored from Crispus Attucks, the first man to die for the cause, through Selena Gray, who preserved George Washington artifacts during the Civil War. The highlighted artifact related to this theme is a signed first edition of the 1773 “Poems on Various Subjects” by Phillis Wheatley, America’s first published African-American female poet.

In 2012, the Oneida Indian Nation, our first allies, donated $10 million to the museum and additional support in the form of an outstanding Oneida Indian Nation Gallery. The gallery features a sound and light program with six sculpted natives in traditional dress that visitors can walk amongst while a multi-screen video provides historic background and facilitates the understanding of the choices offered to and made by indigenous people in the 1700s .

The Continental Navy was formed in 1775, but Congress augmented the fleet with privateers  — privately owned ships licensed to raid British ships and divide the spoils. More than 70,000 men sailed on privateers including James Forten, a free Black man went on to become a wealthy Philadelphian. A 19-ft. by 45-ft. privateer replica is on display and can be boarded by visitors. 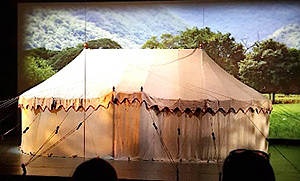 George Washington’s Tent is the museum’s premiere artifact, the actual 23-ft. long and 14-ft. wide that historian’s recognize as the “first Oval Office”. It is comprised of three sections, his office, a sleeping area and a small chamber for his luggage and sleeping quarters for his enslaved valet, William Lee. He traveled with the tent from 1778 until 1783. It is viewed through a glass partition after a 10-minute video presentation. (www.AmRevMuseum.org)

The Little Lion Restaurant, located directly opposite the museum, is named after Alexander Hamilton’s sobriquet. The menu consists of Southern-inspired comfort food served with a delicious culinary spin. It is open seven days a week, and the specialties include an epic breakfast, fried green tomatoes, mouth-watering fried chicken and shrub-based cocktails. The upper level, available for event rental, has separate seating and a bar. The Little Lion offers some of the best casual dining in the Historic Old City. (https://thelittlelionphilly.com)

You can complete your revolutionary visit to Philadelphia with a stay at the iconic Hyatt at The Bellevue on Broad Street. The French Renaissance hotel opened its doors in 1904 as the country’s most luxurious hotel. It is listed on the Register of Historic Places and continues to offer a unique experience, exemplary service, and a complete menu of amenities including nightly turn down service. The on-site Sporting Club is the 2nd largest in the nation, and encompasses an 82-ft. pool, NBA basketball gymnasium, state-of-the-art equipment and the full service A. Kush Salon and Spa. (https://philadelphiabellevue.hyatt.com)

Nestled on the 19th floor of Hyatt at The Bellevue is XIX, a renowned restaurant with a singular city view, attentive staff, elegant décor and exquisite gourmet cuisine. Reservations are highly recommended.

Luxury shopping is offered in the Shops at the Bellevue on the first floor and visitors can round out their trip with a little retail therapy.

When most people think of travel pillows, they think of semicircular pillows that can be cumbersome and bulky. New advancements have led to the creation of the NapAnywhere Pillow. It was designed by a doctor to be orthopedically adjustable, alleviate stress on your neck muscles and, when not in use, to fold flat. The pillow was the winner of the 2014 Product Innovation Award at the International Travel Goods Show. (https://napanywhere.net)