Smooth Traveler: “Putting on the Ritz” in Fort Lauderdale 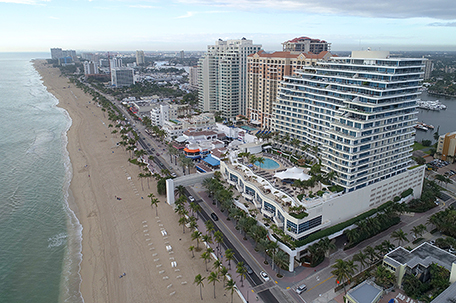 When the first documented Spanish explorers entered the Fort Lauderdale region in the 1500s, they were met by a native presence. These tribes: the Calusa, Missosukee and Timuqua, were only the most recent of a number of tribes that, according to archeological studies, date from the Neolithic age. The Seminoles, members of the Creek Nation, migrated into the area in 1750, and again in 1809. The Spanish built missions in Florida as early as 1567, but because of the climate, the first permanent White settlement on the New River consisted of Bahamians in the 1700s. A census reveals that in 1830 the New River Settlement had a population of seventy. (http://www.visitflorida.com)

During the Second Seminole War (1835-42) Fort Lauderdale was constructed on the New River and residents left the area. The city received its name from this structure. The Seminoles retreated, but remain the only unconquered tribe and the sole tribe to never sign a peace treaty with the United States. Families began to settle there in the 1880s, but few people lived on the river until 1893, when a ferry began operation. The main industries were farming and fishing.

Fort Lauderdale is constantly evolving in interesting and unique ways and in 1960, a movie jettisoned it into college spring break culture with a bang. “Where the Boys Are” made the Fort Lauderdale Strip the place to find love and romance that would eventually result in visitor numbers reaching 350,000. The city underwent a resurgence in the 90s, with new and renovated structures and an emphasis on the plethora of family-oriented and adult activities and adventures available. (@visitlauderdale) 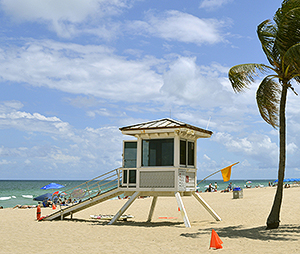 A limited number of guests may enhance their stay with membership in the only Club Lounge of any luxury hotel in Fort Lauderdale. The menu of amenities in the 2,200-square-foot Club Lounge includes culinary experiences throughout the day, computer stations and a private concierge.

The recently renovated Ritz-Carlton Spa is a destination within itself, thematically tied to the history and cultures in the area. More than 40 treatments are offered for women, men and couples and several change seasonally. A signature massage, Intuitive Ocean, incorporates sea salt and marine mud to revitalize, re-mineralize and generally restore well-being. There are 11 treatment rooms and a hair salon.

Burlock Coast Seafare & Spirits is located on the lobby level, and takes its theme from the history of the hotel’s location. The Prohibition-era restaurant is situated on the site where Florida’s most infamous bootlegger brought his liquor ashore. Bill McCoy obtained rum in the Bahamas and off-loaded it in Fort Lauderdale. He packed it in special burlap sacks filled with salt. When he neared the coast, he would sink it in the water through a special hole in the bottom of the boat. After agents searched and found the boats empty, he would pick up the rum when it resurfaced because of the salt.

The chef de cuisine, Gavin Pera, uses fresh seafood, locally sourced foods and seasonal vegetables in creative ways. Every dish is delicious, but they are justifiably renowned for their lobster pasta. Their signature dessert is, of course, key lime pie. The pie is wonderful, but their cheesecake is sublime. James Camp, beverage manager, has made the restaurant equally noted for its sophisticated cocktails.

Also, on the lobby level, you can get a meal to go at the Marketplace and shop for that special gift at Island Company. (www.ritzcarlton.com)

The Ritz-Carlton is in an ideal location to access all the best the city has to offer. Fort Lauderdale is one of Broward County’s six beaches, all Blue Wave Certified by the Clean Beaches Council, stretching 23-miles along the Atlantic. The Intracoastal Waterway and inland canal system provides more than 300-miles of navigable water routes and an endless number of water-related activities. These activities include diving to view reefs as close to the surface as 15-ft. There are more than 75 artificial reefs and a 3-tiered living coral reef system. 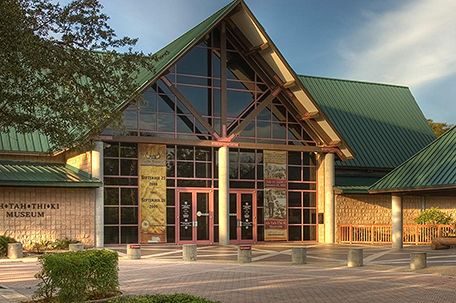 Old Fort Lauderdale Village & Museum is a collection of restored structures that recount the history of the city through guided tours, exhibitions and displays. The 1905 New River Inn, now the History Museum, is said to be haunted. The vernacular-style building functioned as a hotel until 1955.

Old Dillard Museum Fort Lauderdale is housed inside what was a segregated school for African American children where jazz great Julian “Cannonball” Adderley was band director. The museum interprets the history of jazz in the city.

Just west of the city is the Ah-Tah-Thi-Ki Museum Big Cypress Seminole Indian Reservation. The name means “a place to learn” and it lives up to its name. The complex houses a 5-screen theater, nature trail and living village that showcases traditional crafts. (http://www.ahtahthiki.com)

Fort Lauderdale is a great place to do everything, or nothing. You decide! (https://www.sunny.org).