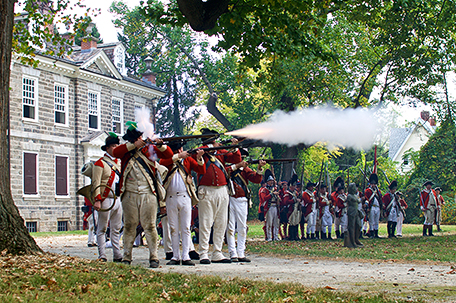 ABOVE PHOTO: Battle of Germantown re-enactement at Chew House. (Shutterstock.com)

Philadelphia was part of a tract of land given to William Penn as partial payment for a debt owed his father by Charles II of England. The wooded area — occupied by the Lenape (also referred to as the Delaware) Indians for 10,000 years — appealed to Penn as the site of a colony where religious freedom was paramount, water access was accessible and green space was available for the health and happiness of the citizens.

The city would become one of the first planned cities in the country. Penn negotiated with the natives for their land and no wall was built to deter access by both natives and colonists. City Hall’s statue of Penn was deliberately situated to face Penn Treaty Park, where Penn and Chief Tammany signed a friendship treaty. (www.visitphilly.com)

Penn arrived aboard the Welcome in 1682. From the outset, the city was cosmopolitan and until the 1770s, it was the largest city of the British colonies and had the largest English speaking population outside of London. It was a city of learning, intellectualism, creativity and was the capital of the nation until 1800. Shipbuilding, textiles, crafts, international trade and the slave trade were economic mainstays.

People tend to be unaware of the early history of slavery in the northern colonies and later the northern states. While slavery there was generally more limited and involved lower numbers, the institution was part of colonial life and beyond.

In 1684, the first slave ship to anchor in Philadelphia — Isabella — held a cargo of 150 Africans. By 1767, there were approximately 814 urban slaves with John Phillips being the largest slave owner with a total of 13 enslaved people. Even William Penn held three enslaved people at Pennsbury Manor, his home 20 miles from Philadelphia.

There are places in Philadelphia and surroundings with lesser known stories to be told.  Visitors can follow the paths of the enslaved and immerse themselves in their stories. Our legacy is long, memories are short, but you can be a keeper of their stories.

Slave auctions were held at Front and High (Market) Street at the London Coffee House. It opened in 1754 after funds were raised by 200 merchants. It functioned as a restaurant, tavern, auction house and market venue. Africans were marched — shackled — up High Street from the Delaware River.

The 10-acre Lazaretto was established as a quarantine Board of Health facility in 1799. In July of 1800, the USS Ganges captured the Phebe and the Prudent near Florida. Onboard were 135 captured Africans bound for Cuba. The ships were sailed to Philadelphia because the Abolition Society was there to care for them. They spent weeks in the Lazaretto for treatment. Eventually they were indentured with several settling in the city. Wanamaker Avenue in Tinicum Township.

In 1697, Rowland Ellis, a Welsh Quaker, settled on land he called Bryn Mawr and built a house. In 1719, he sold his home to Richard Harrison, who renamed the plantation Harriton and brought in 99 slaves to grow tobacco. Harriton is home to Tuggy, the ghost of an enslaved woman.

Legend is that Tuggy was a witch, and while casting a spell she accidentally staked her dress to the ground while driving a stake into the heart of the Harrison’s child who was buried in the cemetery. Because the night was very dark, she thought a spirit had grabbed her and she died of fright. Guided tours are available as are a schedule of events. (www.harritonhouse.org)

Benjamin Chew was one of the largest slaveholders in Philadelphia. He owned nine plantations, as well as homes in Germantown and the city. He held slaves at all properties. Richard Allen, founder of the AME Church, was born a Chew slave. Cliveden, a 1767 Georgian mansion, is fully furnished and offers a snapshot of 18th century life for the wealthy, the enslaved people and indentured servants.

The stories of the enslaved people uncovered in the Chew papers present a unique picture of plantation slave life. The Battle of Germantown occurred on October 4, 1777. The British soldiers commandeered the mansion and fired on the Continental Army, who were inside Upsala Mansion across Germantown Ave.

The nation’s first written slavery protest was penned in Germantown. Four Quakers met at the home of Thones Kunder in 1688 and petitioned the Quaker’s governing body. The 1770 Germantown Mennonite Meetinghouse displays the document and the table upon which it was signed. Tours are offered. (www.meetinghouse.info)

According to Pennsylvania’s 1780 Gradual Emancipation Act, all slaves born after March 1, 1780 would be free at age 28. Slaves brought into the state would become free after six months, although prior to the six month limit masters could indenture them for several years.

John Bartram is often credited with being the world’s greatest natural botanist. He discovered more than 200 plants and traveled thousands of miles collecting botanical specimens and detailing the topography and native cultures. Bartram, a Quaker, was initially a slaveowner but later emancipated his slaves but they continued to work for pay and he became a staunch abolitionist.

His homesite, the 50-acre Bartram’s Gardens, is open for tours  of the 1730 house and gardens and most areas are handicapped accessible. The house if furnished and displays an original Franklin Stove, a gift from Franklin himself. John Bartram High School is named in his honor. (www.bartramsgarden.org)