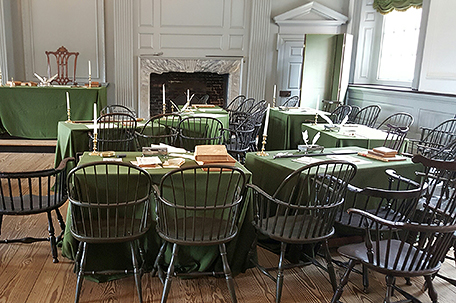 “I am filled with deep emotion at finding myself standing here, in this place, where were collected together the wisdom, the patriotism, the devotion to principle, from which sprang the institutions under which we live.”

Congress decides United States National Parks based upon the criteria that they exemplify our most significant cultural, historic, natural and recreational sites. These sites visually preserve how we developed, what led us to become who we are and how the landscape and infrastructure impacted our growth. These locations allow us to revisit and comprehend the shaping of our national ideal and how events have impacted on these ideologies, an ability that cannot be overstated in the current political climate. Philadelphia’s National Parks are the country’s most important sites in a search to understand our founding documents. The city boasts the most historic square mile in the nation and within that mile are iconic locations that interpret Philadelphia’s role as the nation’s birthplace. (www.visitphilly)

In order to maximize your time and visit all the places that are of particular interest to your party, you should begin in the full service Independence Visitor Center. Here you can obtain free maps and guides, book tours, and charge your devices. WIFI is free, the NPS Independence Mobile App is available for free download, and there is a café and public facilities. (PHL.visitorcenter.com) 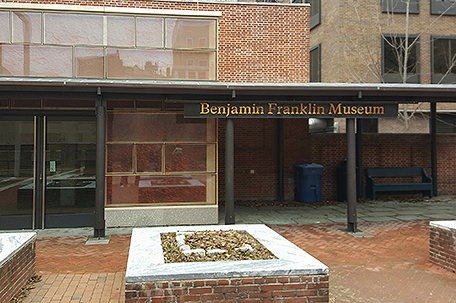 The Benjamin Franklin Museum is a good place to begin your tour, because you can get view of colonial life in general and Franklin’s pivotal role in both the international diplomacy of the era and the political climate in the colonies. Franklin once owned the largest house in the city and the museum is built on the site. Access is obtained by walking through the same alley he used to get home. The museum is underground and incorporates interactive kiosks, films, artifacts and dioramas. Not to be missed are a replica of the sedan chair used to carry him to the Pennsylvania State House and a glass harmonium, a musical instrument created by Franklin in 1761. There is also a display that explores how Franklin’s stance on slavery changed over time. At one time he owned slaves, but an antislavery speech was his final public address. (www.nps.gov/inde/planyourvisit/benjaminfranklinmuseum)

The Franklin Post Office, adjacent to the alley, is “the” place to mail souvenir post cards. This is the only place in the country where you can obtain the special “B. Free Franklin” postmark. Clerks often dress in colonial garb and, unlike any other post office in the country, it does not fly an American flag. A small museum is on the second floor. 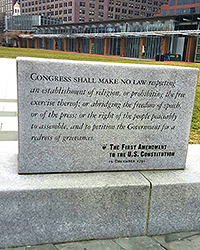 The Declaration House is nestled on the corner of 7th and Market. Jefferson took rooms here during his stay in the city in 1776. It is here he wrote the Declaration of Independence, including the antislavery clause that was later removed. Jefferson and a slave lived in two rooms of the house Jacob Graff Jr. built in 1775. It was reconstructed in 1995.

Independence Hall, then the Pennsylvania State House, was built in 1732. It housed the Second Continental Congress (1775-83) and the 1787 Constitutional Convention. All tours are guided and visitors must have a ticket. Easily the most important room is the Assembly Room, the recreated room where the delegates met and the desks are arranged so that it appears they just left. Washington presided for more than two months, and the famous “rising sun” mahogany chair is situated at the desk in the front of the room. Franklin is credited with the name based on his statement, “I have often looked at that behind the president without being able to tell whether it was rising or setting. But now I know that it is a rising sun.”

Congress Hall recently gained attention when Vice President Pence visited the House Chamber. It is in this room that Washington peacefully transferred power to John Adams. This was the first peaceful transition in modern history and it set the precedent for future inaugurations. Adams delivered his address from the speaker’s dais.

The President’s House is an open-air museum that interprets the time period when Washington and Adams served here. Philadelphia was the nation’s capitol. The story of Washington’s slaves is related at the site as well. 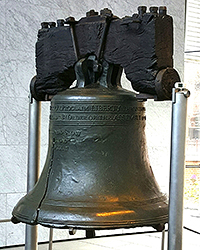 Adjacent to the President’s House is the Liberty Bell Center. Originally the State House bell, it was last rung publically in honor of Washington’s birthday in 1846. It received the name, Liberty Bell, from antislavery activists who referred to the inscription, “proclaim liberty throughout all the land.” The bell tolled for important events including the deaths of Franklin, Jefferson, Adams, Lafayette, Washington and Alexander Hamilton.

Recently the Second Bank of the United States became the Portrait Gallery. A stop here allows visitors to get up close and personal with the men and women who shaped our nation. The 1818 building is modeled after the Parthenon in Greece and makes an outstanding frame for the more than 150 portraits by artists including Charles Wilson Peale.

The National Constitution Center is the sole institution in the country dedicated to the task of teaching people about the US Constitution on a nonpartisan basis. The center regularly hosts traveling exhibits that allow visitors to explore evolving and historic interpretations of the document. A favorite of the permanent exhibits is Signers’ Hall where visitors can walk among the life sized bronze sculptures representing the 42 Founding Fathers. A copy of the first public printing of the Constitution is displayed.

The current featured exhibit is “American Spirits: The Rise and Fall of Prohibition.” There are more than 100 artifacts on display within a 5,000-ft. exhibition area. Highlights include, Eliot Ness’s signed oath of office, Carry Nation’s hatchet and a bootlegger’s 1929 Buick Marquette. This exhibit extends through July 16, 2017. In February, former Vice President Joseph Biden was selected to chair the National Constitution Center. (http://constitutioncenter.org )

The new, chic, tech must have is wristband stereo headphones. Braided, wearable headphones, wrap around your wrist and expand to become noise blocking, audio earphones with a one-button mic. Never lose your earphones again. @my_wraps