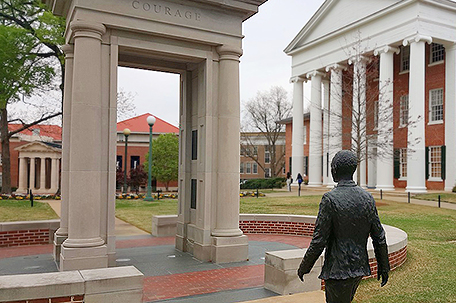 Oxford, Mississippi, located in the northern of the state and the heart of the South, has a long and storied history that begins with the three great tribes — the Choctaw, Chickasaw and Natchez — that inhabited the region prior to European arrival in 1541. The land was meagerly populated until the end of the French and Indian War in 1763. In 1798, Congress delineated the Mississippi Territory. The Chickasaw Indian Cession Treaty relocated the tribes in 1836, adding 6,283,804 acres to the territory, including what is now Oxford. (visitoxfordms.com)

Three inhabitants of the area donated 50 acres and named the new town Oxford after the university and town in 1836. The legislature agreed to build the University of Mississippi, (‘Ole Miss’,) there. It was chartered on February 24, 1844. Sixteen years later, the institution suspended classes so that the students could fight in the Civil War. (www.olemiss.edu)

Oxford is a walkable city filled with historic sites, post-war architecture, museums, entertainment venues, eclectic dining options and specialty shopping opportunities. I have outlined eight thematic clusters that make the city easier to experience. Maps and guides are available in the hotels and the Visitor Center.

1. Oxford’s Historic Downtown Square has more than 100 locations of interest, including commemorative markers and sculptures. One of particular note is Off Square Books, voted one of the top ten independent bookstores in America. It is home to the weekly Thacker Mountain Radio Hour, a live broadcast of music and book readings. Two additional allied bookstores, Old Square Books and Square Books Jr., are also on the square. Music aficionados must visit The End of All Music, one of the nation’s top independent record stores. Pause in a small plaza and sit beside William Faulkner. (www.squarebooks.com)

2. African Americans settled near downtown during Reconstruction in a section called Freedman Town. In 1869, they erected the first Burns Methodist Episcopal Church for $3,000. The current structure dates from 1910 and functioned until 1974.

After the congregation relocated in 1993, author John Grisham purchased the building as an office. Grisham donated the building in 2002, and it recently underwent a restoration. It is now a museum and community center.

Museum exhibits interpret African American history from the 17th-20th centuries through a two room self-guided tour and 13-minute video. The pews and Bible date from the earlier structure.

3. In October of 2018, a marker in memory of Elwood Higginbottom was placed at the intersection of Molly Barr Road and North Lamar Boulevard. Higginbottom, a sharecropper, was engaged in a land dispute with his White neighbor in 1935, and became the final lynching victim in the county. The marker has been placed where they believe he was buried.

4. L. Q. Lamar is represented in John Kennedy’s “Profiles in Courage.” He was a slave owner, secessionist and post-war advocate for Black rights and education. Exhibit rooms are thematic and self-guided. (www.lqclamarhouse.com)

5. No matter what pleases your palate, you can find it in Oxford. Dine on international or southern cuisine and finish off the meal with a specialty drink.

Big Bad Breakfast will make this your favorite meal. Along with a plethora of choices, don’t miss the house-cured Tabasco brown sugar bacon. (www.bigbadbreakfast.com)

Saint Leo’s is a 2017 James Beard Award semi-finalist for “Best New Restaurant.” Dishes are a combination of fresh local ingredients and wood-fired Italian cooking. One block away is the Saint Leo Lounge, helmed by James Beard-nominated bar director and mixologist Joe Stinchcomb. Formerly the Oxford Eagle Newspaper, the décor is thoroughly modern with a disco ball decorated dance floor. (eatsaintleo.com)

Chef Vishwesh Bhat, a James Beard Award nominee for Best Chef South, reigns over The Snack Bar. The food is outstanding and the oyster bar is superb. (citygroceryonline.com/snackbar)

6. A tour of the University of Mississippi is a deep dive into the nation’s history. In 1961, James Meredith applied for admission into the university. After two rejections, he was admitted in 1962 and was accompanied by 500 U.S. marshals and a cease and desist obstruction order. When the police were removed on September 29, a riot broke out, two people were killed and many wounded.

President Kennedy ordered 11,000 MS National Guard and 20,000 federal troops to restore order. Meredith graduated in 1963. In 2003, a sculpture was placed on the Lyceum Circle entrance. Meredith is depicted walking towards the Lyceum where a bullet hole is still visible. The university offers a self-guided Meredith walking tour that can be downloaded from the web.

A professional journalism marker on campus honors French journalist Paul Guihard who was murdered near the student union on September 30, 1962.

The university is also home to the Center for the Study of Southern Culture and Living Blues magazine. The center documents and preserves African American blues, gospel and folk traditions. In 1984, the renowned Blues Archive opened and showcases B.B. King’s personal record collection, rare documents, books, and artifacts. This is a unique treat. Entrance is free.

7. Oxford is known as the Literary Capital of the South largely because it was home to Nobel and Pulitzer Prize winner William Faulkner.

He lived in his Greek Revival Rowan Oak home from 1930 until his death.

All of the rooms are open to view and there are displays of personal items, photographs and listening booths. Everything is original. His funeral service was held in the parlor. Visitors can walk the 29-acre Bailey’s Woods.

Faulkner is buried in Oxford Memorial Cemetery and it is traditional to leave whiskey or take a drink with him while you are there. His nursemaid, Mama Callie, was originally buried at his request in the family plot. After his death, she was moved to the “colored” section. (rowanoak.olemiss.edu)

8. Two mandatory music venues near Oxford are Taylor Grocery and Foxfire Ranch. Taylor Grocery is famous for its catfish and live music. People do not visit the area without stopping by. (www.taylorgrocery.com)

The 80-acre Foxfire Ranch gives the experience of a family-friendly traditional juke joint. In the summer, the shows are outdoors. Iretta and Johnny B. Blues Band performed there on their way to Europe. Soul food was on the menu and the music was in your soul. Call for showtimes.

Graduate Hotel Oxford is within walking distance of everything. It is cleverly decorated to reflect both the campus and literary atmosphere. Café 82 is open for casual fare and The Coop, a roof-top bar, is open for dining and nighttime viewing. (graduateoxford.com)

Take a tour with Oxford Historian Rhondalyn Pairs, grab a bike at the Graduate, take a Double Decker Bus Tour or stroll along the historic streets. An Oxford vacation always fits your budget and your state of mind.