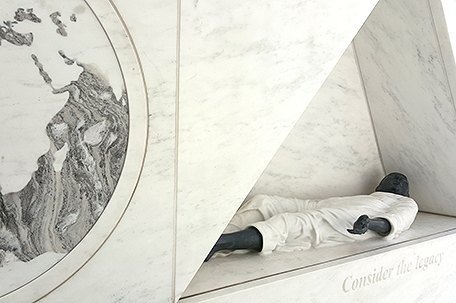 ABOVE PHOTO:  Slave routes and figure

Ten years ago, the United Nations General Assembly (UNGA) made a commitment to erect a Permanent Memorial to acknowledge, memorialize and honor the Transatlantic Slave Trade and its victims. Four years later, the Permanent Memorial Committee and UNESCO partnered to establish a search for a design and — in conjunction with several Caribbean countries — raised the $1.7-million necessary to make it a reality. 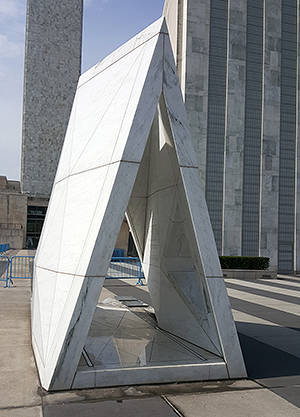 Rodney Leon, a Haitian-American architect who previously designed the African Burial Ground National Monument in lower Manhattan, was selected from 310 international entrants. His thought-provoking design, “The Ark of Return,” was dedicated on March 25, 2015, which is the International Day of Remembrance of the Victims of Slavery and the Transatlantic Slave Trade. It is situated on the United Nations Visitors Plaza in New York City, faces eastward toward Africa and invites interaction, contemplation and educational opportunity. It also serves as a reminder of slavery’s enduring legacy, current human rights violations and the impact of modern racism and continuing trade in slaves globally.

It is important to remember that the African Slave Trade is the second African Diaspora, the first being the movement of mankind out of Africa from 100,000 to 150,000 years ago. This mass movement populated the globe and led to an “African” history that often goes untold. Scholars believe that the trans-Saharan slave trade was the first on the African continent and led to the first mass slave revolt that took place in Iran from 869-83 AD. This uprising, the “Zanj Revolt”, the “Revolt of the Blacks”, resulted in the death of thousands. Nearly 1,000 years later in 1804, Haiti’s Toussaint L’Ouverture led a revolt that made Haiti the first country to end slavery and free itself from France.

The greater than 400-year time period of the transatlantic slave trade remains the largest forced migration in history. It is estimated that from 1501-1830, four Africans sailed to the Americas for every single European. Every aspect of the journey was inhumane and harrowing. North Americans tend to know more about the Spanish and British trade, but facts are emerging that the Danish may have been the biggest slave traders, because their ships held up to 1,200 people. The Dutch were among the cruelest because, on average, 30 percent of their captives died on the voyage. More than 18 million people were transported, and those who survived the Middle Passage were destined to withstand continued horror as enslaved workers. 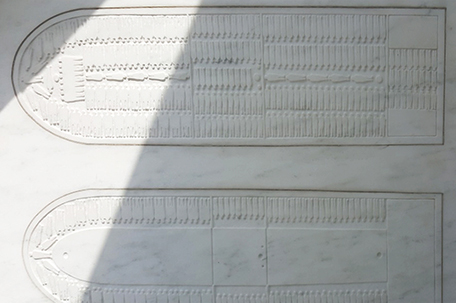 The white marble Permanent Memorial, The Ark of Return, is thematically divided into three experiences, “Acknowledge the Tragedy”, “Consider the Legacy”, and “Lest We Forget”. The memorial is reminiscent of a ship and it is generally designed to harken back to Gorée Island, Senegal’s “Door of No Return”, a slave fort doorway that led to the trade ships from which captives never returned to their homeland. The Ark represents an oppositional journey that returns us to a spiritual place of cleansing and transformation.

One of two focal points of the sculpture is the Trinity Figure, a prone male personifying the spirit of those who made the voyage, both those who survived and those who did not. The space the figure inhabits is small and cramped not unlike the space allotted an individual on a slave ship.

The second focal point, an extension of the “Lest We Forget” portion of the sculpture, is a triangular waterfall. It is placed in the front of the memorial and represents forward movement and functions as a stimulant to contemplation.

The monument is designed to be experiential, and visitors are invited to walk through the 15-ft. high room beginning with “Acknowledge the Tragedy.” This area exhibits a three dimensional map that features the routes and international reach of the triangular slave trade. Proceeding to “Consider the Legacy,” we are confronted by the Trinity Figure, near the inscribed plans of the interior of a slave ship. “Lest We Forget” is the final element. 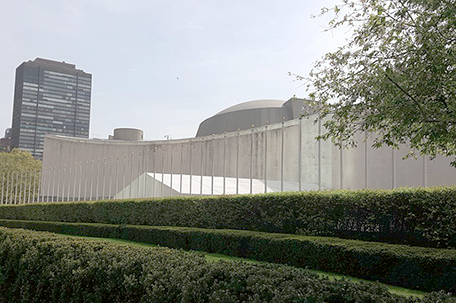 This tangible marker honoring victims of the triangular slave trade is in keeping with the mission of the United Nations, which is “the promotion and preservation of the dignity and worth of all human beings.” It was at the United Nations World Conference in 2001 that slavery was declared a crime against humanity.

Visitors must sign in at the Welcome Center across the street from the visitors’ entrance. There is no charge for admission and free weekly briefings are held each Wednesday from 10:30 to 11:00 AM. Group visits can be arranged in advance.

Suzan-Lori Parks’ newest play, “Venus”, is currently playing at Signature Theater at 480 W. 42nd Street. The production details the story of Saartjie Baartman, a 19th-century South African female who became a leading attraction in a London freak show. Her performance revolved around her extended posterior. She was billed as the “Hottentot Venus” and was an object of general, amorous and medical curiosity. Through her true story, Parks explores modern issues of beauty, relationships, power and control. #VenusSLP

There is a solution to charging the overwhelming number of devices necessary to improve our daily lives. The new recipient of the “Best of CES 2016 Award” by iPhone Life Magazine, ChargeHub X3 and X5, can charge three or five devices simultaneously with SmartSpeed Technology up to 2.4 amps per port, or a total of 5 amps with a single 6-ft. power cord. For additional information or to order go to the website. (https://thechargehub.com)

Innovative Etymotic earphones provide an unsurpassed audio experience by replicating the ear’s response to reproduce natural sound with accuracy. Invented by an audiologist, engineer and jazz musician, these earphones seal the ear canal and have earned the highest noise isolation rating accredited by the National Institute of Standards and Technology. Etymotic has the distinction of being the first company to develop and patent noise-isolating, high fidelity in-ear earphones.  (www.etymotic.com)