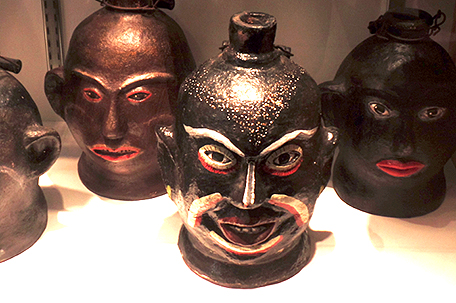 Each state has a distinct biography that includes its history and historic significance and North Carolina’s Blue Ridge Heritage Trail is the perfect place to obtain a snapshot of the unique cultural heritage of this mountainous region. All along the trail there are sites related to stories and events that round out the story but none puts the pieces together better than Kings Mountain National Military Park and the 200-mile Overmountain Victory Trail. blueridgeheritagetrail.com

The Patriots and the British reached a northern stalemate by 1780 and the British turned their Revolutionary War efforts south. They raised a group of American Loyalists to fight and verbally challenged the existing frontiersmen. The Scotchish and Irish who fled British tyranny settled in the mountains and foothills and rose to the challenge. They crossed the mountains in severe weather conditions, met the Loyalists and wiped them out. The battle was Americans against each other and has been credited with ending the war. NC’s patriots were independent individuals with strong kinship and cultural allegiances and their personalities stamped the region’s development.

Wilkes County’s 2009 Northwest North Carolina Visitor Center is an absolute must see. It was built at a cost of $12-million and is 100 percent sustainable. wilkescountytourism.com, explorewilkes.com

Wilkes Heritage Museum, Inc. operates three historic structures: the 1779 Robert Cleveland Log House; the 1859 Old Wilkes Jail; and the 1902 Wilkes County Courthouse housing the Wilkes Heritage Museum. They are all located in Wilkesboro’s downtown. The Wilkes Heritage Museum is home to the Blue Ridge Music Hall of Fame as well as galleries filled with local history, lore and the African American presence interpreted through documents, artifacts and memorabilia. The gift shop is noted for its local crafts and singular souvenirs. wilkesheritagemuseum.com

The 1779 Capt. Robert Cleveland Cabin with two rooms downstairs, a large attic and a root cellar, was relocated and restored. Cleveland raised 17 children in the log house. Interactive educational programs are regularly scheduled. 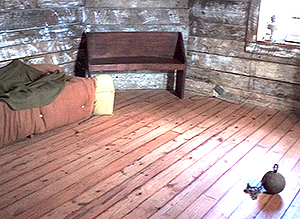 Most people first learned of Tom Dooley through the folk song but few are aware that he was a real person, Tom Dula, and his case represents one of the first crimes of passion in the country. A trip to the Old Wilkes County Jail provides access to his jail cell. Dula was a handsome young man who left his sweetheart, Ann, to join the Civil War. Upon his return she was married and he began seeing her cousin, Laura Foster. One night Laura ran off, possibly to meet Tom, and disappeared. Her body was later found and Tom was hunted down. He and Ann were arrested and placed in adjacent cells. Tom exonerated Ann before he was hung in 1866.

Wilkes County was referred to as the “Moonshine Capital of the World.” Moonshine, untaxed liquor made by moonlight, was produced from colonial times but became a real economic driver during Prohibition. Runners in cars fitted with additional springs, storage space and reconditioned electrical systems and fuel tanks transported “White Lightening”. They began racing each other when not on a run and NASCAR was born. Wilkes County’s Junior Johnson, inventor of the bootleg turn was deemed by Sports Illustrated “the greatest NASCAR driver of all time.”

Call Family Distillery offers an outstanding tour that includes the stories of  the Rev. Dan Call, who taught Jack Daniel how to make whiskey, and Willie Clay Call, the “uncatchable” moonshiner and tastings. The tour includes a look at Willie Call’s favorite, car a 1961 blue Chrysler and a glimpse of authentic, wood wrapped jugs. callfamilydistillers.com

Copper Barrel Distillery is the county’s first legal moonshine distillery. It is situated inside the Old Key City Furniture Plant, tours and tastings are regularly scheduled and their in-house store is fantastic. copperbarrel.com

Stay in the county long enough to attend Merlefest, one of largest roots music festivals in the United States. The festival will take place from April 28-May 1. The lineup and tickets are available online. merlefest.org

Cleveland County’s Shelby area is a traditional Cherokee homeland and it was they who met Hernando de Soto in 1540. About 200 years later, European settlers arrived and the town was named after a hero of the American Revolution. tourclevelandcounty.com

The Earl Scruggs Center opened in 2014 in the 1907 courthouse and the collection consists of 18,000 objects and an orientation film. Scruggs gained fame for playing the soundtracks of the “Beverly Hillbillies” and “Bonnie and Clyde.” Highlights of the galleries include interactive and listening stations and his personal instruments. Earlscruggscenter.org

The Art-deco Don Gibson Theater opened in 2009 retaining its 1939 original terrazzo entrance, unique carpet and architectural elements. Gibson wrote many standards including “Oh Lonesome Me,” “Sweet Dreams” and “I Can’t Stop Loving You” and is credited with helping to create the Nashville Sound. The theater is also a concert venue and backstage tours can be taken. Highlights are artifacts, memorabilia and a backstage wall filled with artists’ signatures including Whitney Houston and Tyler Perry. dongibsontheater.com 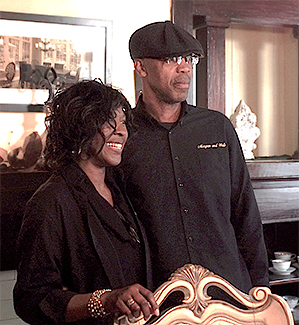 Melanie and Derrick Graham, owners of Morgan and Wells Bed and Breakfast.

Many of the District 12 scenes in Hunger Games were filmed in Shelby. Visitors can follow the filming trail and visit the eateries and shops the cast and crew loved. Pleasant City WoodFired Pizza Grill, with an eclectic menu and 15 rotating microbrews on draft was a favorite. The staff will point out where cast members sat making for a photo op. pleasantcitywoodfiredgrille.com

The elegant Morgan and Wells Bed and Breakfast is situated inside a craftsman-style house filled with designer features. Each room is unique and chef prepared meals are outstanding. Morgan and Wells is ideally located in Uptown Shelby. Morganandwells.com