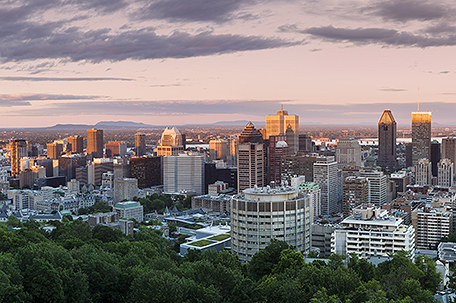 Jacques Cartier reached the island at the confluence of the Ottawa and St. Lawrence Rivers in October 1535 and became the first European to explore the area. A fortified indigenous village, Hochelaga, preexisted on the island and was described as having about 1,500 residents and 50 longhouses.

The natives accompanied Cartier to the crest of a small mountain on the island he named Mont Royal and from which Montréal gets its name. (#mtlmoments)

By law no buildings can be higher than the mountain and the view from Mount Royal Park Lookout  is breathtaking. The park was designed by Olmstead and offers an array of outdoor activities including the Mount Royal Stairs, 400 steps that ascend from Peel Street to the top, skiing, and biking.

In 1643, Paul Chomedey de Maisonneuve prayed to the Virgin Mary to avoid a flood. He placed a wooden cross atop the mountain when his prayers were answered. In 1924, a 103-ft. cross was erected on its spot. It is LED lit each evening.

Champlain arrived in 1603 and returned in 1611 to establish a fur trading post. In 1642, Fort Ville Marie was founded by  Paul Chomeday and Jeanne Mance and, because of its location, quickly became the epicenter of the continent’s beaver  trade. The French governed the area until 1760 and in 1763 Montréal was relinquished to the British in The Treaty of Paris.

Montréal’s first documented tourist was Asseline de Ronval who used his inheritance to sail to New France in December 1662. His journey took more than a month, but modern visitors can drive, fly or take the train and be there in a few hours. In the ensuing 357-years, Montréal has become Canada’s second largest city, has 6,500 restaurants and 26 bridges and tunnels.

Asseline feared the harsh winter but currently RÉSO, a 20.5-mile underground city, provides shelter and more than 1,700 shops, hotels, entertainment venues and restaurants with access to 68 metro stops. Language was not a barrier for Asseline, and it is not one for today’s visitors. Montréal is the world’s second largest French-speaking city after Paris, 80 languages are spoken here and most residents are bilingual or English-speaking.

Montréal has a European ambiance, historic sites, shopping and entertainment venues that lure travelers. These amazing options can be experienced with unique high-tech additions. The ideal accommodation for a “tech tour” is the eco-friendly Boxotel. Amenities include fully-equipped kitchens, washer and dryer, WIFI and designer linens and bath products. A home-automation system allows guests to program drapes, lights, media, temperature and heated bathroom and foyer floor.

A spa, roof-top terrace and the CAPSA Restaurant are on site.  Boxotel is located in the  Quartier des Spectacles, an area with more than 80 cultural venues, and home to many of the 110 annual festivals held including the  Montréal Jazz Festival. (boxotel.com)

Spade & Palacio Tours offers several walking tours that provide comprehensive overviews of the city’s food and murals around Saint-Laurent Blvd. The murals date back to 2013 and feature social commentary and history. A highlighted Jackie Robinson mural commemorates his time in the city. The food tour lets you taste your way to and through the 1933 Jean Talon Market, the largest open-air market on the continent.  (spadeandpalacio.com)

Old Montréal and the Old Port must be seen in daylight and darkness to fully understand the richness of the city. Beginning at dusk the Cité Mémoire, a free mobile app, walks you through 25 brief history tales projected on the walls of the city in the world’s largest projection circuit. (montreatenhistoires.com)

Rue Saint Paul, the city’s oldest street, dates from the 1600s when it was a path adjacent to the fort. In 1672, it was paved with cobblestones and the fur brought in by canoe was stored in houses along the narrow street. It continues to be pivotal to trade as today it is a shopping mecca lined with galleries, cafés and unique shops. The 2-story restored 1847  Bonsecours Market anchors the street.

At the birthplace of Montréal the Montréal Archaeology and History Complex interprets the founding of the city. The archeology museum sits upon actual ruins and through a 17-minute orientation film and a series of interactive galleries the chronological story is related.

The iconic, Notre-Dame-de-Bon-Secours, built in 1771, is known as the sailor’s church. The 1893 figure atop the church has outstretched arms blessing the sailors. You can climb the tower or descend into the crypt. Audioguides are available.

Notre-Dame Basilica of Montreal is a stone Gothic Revival church constructed between 1824-29. The interior is spectacular, replete with stained glass windows, a handcarved pulpit and a 7,000 pipe organ. Be prepared to be awed. AURA, an internationally recognized sound and light show, is presented using the basilica interior as a setting. notredamebasilica.ca

The Old Port is the setting for La Grande Roue de Montréal, a 197-ft. high wheel with 42 heated and air-conditioned cars and a 17-mile view. Nearby is a bistro, bar and the first urban zipline in Canada, MTL  Zipline. The view includes hourly evening shows on the illuminated  Jacques Cartier Bridge.  LGRDM.com

“Through the Echoes” at the   PY1 Pyramid in the Old Port is new immersive program by  Guy Laliberté. The 60-minute multimedia experience is a technological journey starting from the Big Bang. It  incorporates spoken word, music, dance, art and lasers within an 82-ft. tall pyramid. The space morphs into a nightclub at night featuring VIP experiences, techno-music and rotating themes.  https://py1.co/en

The exhibition is beautifully presented with particular emphasis on his haute couture creations and runway and stage outfits created for the likes of David Bowie, Naomi Campbell, Madonna and Prince. This is a once-in-a-lifetime exhibition. mbam.qc.ca

Montréal is a perfect vacation destination. It is walkable, safe and the currency exchange rate is heavily in our favor. The Official Montréal City Guide app is available for download so make plans to make the most of a Montréal vacation. @Montreal

EgyptAir’s promotional flights to Egypt coincide with Osiris Tours’ 9-day King Tut Adventure and internationally renowned biannual Sun Feast at Abu Simbel Temple on October 22nd and February 22nd. On those dates, the sun lights the temple’s inner rooms and all the statues within except Ptah, the god of the Underworld. Tours include sights in Cairo. This is the experience of a lifetime.  www.osiristours.com/egypt

Smooth Traveler: High, low and no tech tips for travel