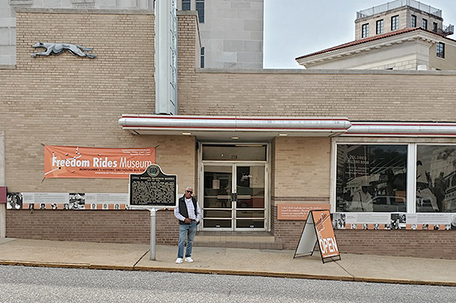 “My soul looks back in wonder.”

Montgomery, Alabama has, from its beginning, acted as a historical vortex, drawing people and events into its orbit in astonishing configurations. This is the city of the Creek Indians, M.L.K., Rosa Parks, Judge Frank M. Johnson Jr. and Jefferson Davis, of the White House of the Confederacy and  Dexter Avenue Baptist Church.

It nurtured both the Confederacy and the Civil Rights Movement. It is nearly impossible to fully understand the birth of the Movement without visiting Montgomery and following the US Civil Rights Trail. (https://civilrightstrail.com)

Alabama was settled by Europeans in 1720. Slavery was introduced simultaneously. The majority of the enslaved people were brought from other states. In 1819, when Alabama became a state, slaves accounted for 30% of the population.

In 1716, Scotsman James McQueen settled in Montgomery to trade. A year later, the French established Fort Toulouse as a trading post. By 1860, 51% of Montgomery’s population was enslaved.

Throughout the city historical markers have been placed to interpret the story and allow visitors to envision the events and spatial relationships.

The Montgomery Slave Markets and First Emancipation Observance markers indicate that the main slave market, one of the state’s largest, was at the Artesian Basin, now Court Square.

In. the 1850s, there were four slave depots. Markers also indicate the port of entry and departure and the train depot used for transport of the enslaved.

The Museum of Alabama provides an excellent overview of the state’s history showcasing more than 800 artifacts. Native American culture is prominently featured as well as Civil Rights and first person stories in “Alabama Voices.” Many exhibits are interactive. Self-guided tours are free.

Highlights of a tour of the living history museum are the 1850s Ordeman-Mitchell-Shaw House and urban slave dwelling and the 1810s Lucas Tavern. Sites are furnished, interpreted and represent Central Alabama life. Tours are offered.

Montgomery became the state capitol in 1846 and later the Confederate States of America’s capitol in February of 1861.

On February 14, 1861 a convention was held in the senate chamber and the Confederacy was formed. Four days later Jefferson Davis was inaugurated on the capitol portico where a brass star indicates the spot.

Alabama Bicentennial Park, across from the hilltop capitol, displays a series of carved brass plaques that feature Alabama’s history from the “Ancient Sea” to  the new millennium. Free tours are available.

Frank M. Johnson Jr U.S. Courthouse Complex is named after Judge Johnson who was awarded a Presidential Medal of Freedom in 1995. He is credited with making precedent setting decisions regarding integration and civil and voting rights. His 1963 case, Lee v. Macon County Board of Education, was the first statewide school desegregation ruling.

Rosa Parks was arrested on December 1, 1955 when she would not relinquish her municipal bus seat to a White male.

Her bail was paid and M.L.K. organized the Montgomery Improvement Association to organize a boycott, considered the beginning of the Civil Rights Movement.

The Rosa Parks Museum and Library honors her legacy with exhibits, events and programs. A highlight is “The Cleveland Avenue Time Machine,” restored to replicate a 1955 public bus. Visitors experience the bus boycott through special effects.

On December 1, 2019 a bronze statue of Rosa Parks was dedicated nearby. It is a great photo opportunity.

Martin Luther King, Jr. was pastor of the iconic Dexter Avenue King Memorial Baptist Church until 1960. It is from here that he organized the boycott and helped found the Southern Christian Leadership Conference. A tour highlight is King’s original pulpit. Reservations recommended. (www.dexterkingmemorial.org/tours)

The Freedom Rides Museum is exciting on both the interior and the exterior. Photos and text on the exterior recount the harrowing passage from Washington, D.C. to Jackson, Mississippi. The goal was to call attention to lack of enforcement of rules against segregated transportation by having Black and White passengers travel together.

On May 20, 1961 the Freedom Riders arrived at the Montgomery Greyhound Station. They and Justice Dept. representatives were viciously attacked by a Klan inspired mob and the promised police presence was nonexistent. When the police arrived they charged the riders with inciting violence. President John F. Kennedy sent 400 federal marshals to the city. (freedomridesmuseum.org/)

The 1965 Selma to Montgomery National Historic Trail, a national park area, follows U.S. Highway 80 from Selma to Montgomery. Initially, the protest marchers were stopped by state troopers in a confrontation known as “Bloody Sunday” on the Edmund Pettus Bridge. They set out again on March 21 after Judge Johnson granted authorization. They stopped overnight at the City of St. Jude, where there is now an interpretive center and garden, and held the “Stars for Freedom Rally.”

On March 24, they reached the State Capitol. King addressed the crowd with his “How Long, Not Long” oration. The Center’s exhibits are thematic and cover all aspects of the march. A striking statue, “Homeless Jesus,” is in the garden.

Keep your eyes open for the Public Art/Selma to Montgomery Sculpture Trail. They are a series of artworks throughout the city, including a commemorative mural and “Footsteps of the Marchers” sculpture. @MontgomeryCapitalCool

Make your last adventure in Montgomery having a bite at 102-year-old Chris’ Hotdogs. The establishment has been frequented by Hank Williams and Dr. King among other luminaries.

Springhill Suites-Montgomery Downtown is also ideal for part two of your visit. Amenities include designer linens and bath products, complimentary wireless, coffee machine, large screen television and 24/7 fitness center. The location is no more than a 15-minute walk to dining and entertainment venues as well as 99% of the historic sites. (www.marriott.com/SpringHill/Suites)

My Soul Looks Back In Wonder: Montgomery, Alabama