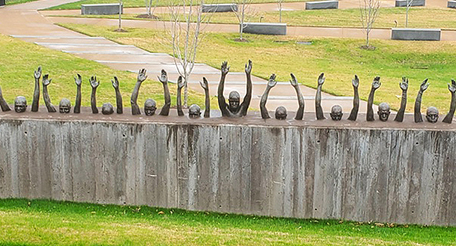 “Few will have the greatness to bend history itself, but each of us can work to change a small portion of events, and in the total of these acts will be written the history of this generation.”

Montgomery, Alabama is widely recognized as both the “Cradle of the Confederacy” and the “Birthplace of Civil Rights.” You may wonder how one small city can embody both of these huge movements, but it somehow manages to balance this history by taking an unflinching look at the events holistically.

The history of our country’s race relations requires continued  examination and, once again, Montgomery finds itself the site of four institutions dedicated to teaching, documenting and presenting issues of race that might otherwise go untold. (@MGMCapitalCool)

The Civil War ended in April, 1865. The Klan was formed in December of that year as a way of regaining and maintaining control over Black people — their initial targets — through terror.

The Klan grew increasingly violent and emboldened, even organizing a meeting in 1867 to plan a unified response to the government’s Reconstruction program. The Klan, the first of the White supremacist organizations, expanded their hatred to include Catholics, Jews, immigrants and LGBTQ individuals.

The Southern Poverty Law Center (SPLC), a civil rights law firm, was established in 1971 by Morris Dees, Joseph J. Levin Jr., and Julian Bond. The nonprofit organization is best known for its litigation against supremacists, free “Teaching Tolerance” educational materials, and Hatewatch, the activity monitoring of right-wing radicals and other hate groups.

The Civil Rights Memorial Center invites visitors to learn about the ongoing history, challenges and martyrs of the Movement through interpretive panels and interactive displays. A 20-by-40-foot digital Wall of Tolerance features cascading names of those pledged to fight against injustice. Visitors are invited to sign the wall as well. (www.splcenter.org)

The SPLC Civil Rights Memorial was designed by Maya Lin in 1988 to honor 40 martyrs in the cause of human rights in the modern Civil Rights era, 1954- 1968. Their names are etched clockwise on the black granite Martyr’s Table.

The table is 31-inches high so that children may touch the names and feel the water that flows from its center. A wall behind it is etched with the words, “We will not be satisfied until justice rolls down like waters and righteousness like a mighty stream”.

The 11,000-square-foot Legacy Museum: From Enslavement to Mass Incarceration was established  April 26, 2019 on the site of former slave auctions and holding pens near the docks and train depot used for their transport.

The museum documents historic racism from the trans Atlantic trade through current mass incarceration with videos, interactive kiosks and large visual displays. Jars containing soil from the sites of the atrocities are displayed at both the museum and the memorial.

The museum is stunning and should be visited prior to the National Memorial for Peace and Justice. A shuttle is available to take you to the Memorial. (www.museumandmemorial.eji.org/museum)

The National Memorial for Peace and Justice is situated on a hill within a complex consisting of a visitor center, gift shop, sculptural dioramas and gardens. A winding pathway takes you to the first memorial dedicated to Black people who suffered through the lynchings, violence and terror perpetrated against them. It is lined with information panels that provide historical information.

The main pavilion displays over 800 steel steles inscribed with the names of 4,400 people who were lynched or were victims of racially motivated murder from 1877 to 1950. Most perpetrators were never brought to justice. Remember that these crimes were documented, however, an accurate number is much larger. Tours are self-guided.

The Equal Justice Initiative (EJI) funded this $20-million project through private donations. Their primary mission is to legally represent the unjustly incarcerated and accused. “Just Mercy,”opening in mid-January, dramatizes the story. (www.eji.org/national-lynching-memorial)

Springhill Suites-Memphis Downtown provides ideal accommodations for any trip to the city. Originally built as a cotton warehouse, it has outstanding architectural features such as original beams, high ceilings and unique room configurations. Amenities include an outdoor pool, complimentary wireless and a 24-hour fitness center.

Central is a best bet restaurant located downtown. It is the 2018 OpenTable Diners’ Choice Award and Montgomery’s #1 rated restaurant on TripAdvisor. Reservations are recommended. (www.central129coosa.com)

A local favorite, Dreamland, is known as the place for BBQ. The atmosphere is casual and the food and service are exemplary. (www.dreamlandbbq.com)

Montgomery offers an affordable journey. It has numerous sites on the US Civil Rights Trail, and we will explore them in Part Two. (www.civilrightstrail.com)

Make a New Year’s Resolution to visit Montgomery and honor the legacy! (#myMGM)

Correction from 1/5 Smooth Traveler column: CityPASS is available online and can be printed or saved on your mobile device for use at attractions in 14 cities. Users choose attractions to save up to 50% and bypass the ticket line. Tickets are valid for nine days after first use and a mobile travel guide is offered containing complete attraction information. (www.citypass.com)

My Soul Looks Back In Wonder: Montgomery, Alabama