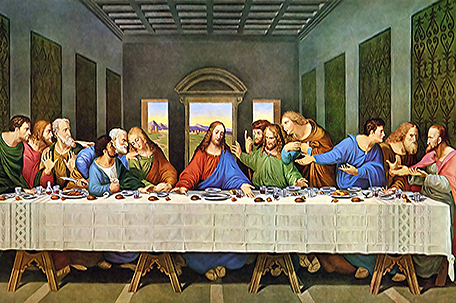 Milan, located in picturesque Northern Italy, was established around 400 BC after the Gauls overcame the Etruscans and named it Mediolanum. The Romans conquered the area in 222 BC. In 15 BC, it became the Western Roman Empire’s capital. It was in Milan that Emperor Constantine I proclaimed The Edict of Milan in 313 AD, announcing religious tolerance for the Christian religion in the Roman Empire.

The Goths displaced the Romans and christened the land Mailand, the land of spring. In the 6th century AD, the Lombards seized control, leading to the region’s name, Lombardy. During the Italian Renaissance(1300-1499) the city became a cultural draw. In 1535, 200 years of Spanish rule began. When Italy became a kingdom in the 19th-century, Milan again became the cultural capital and has remained so. (www.turismo.milano.it).

Milan is definitely tourism ready and there are a variety of ways to stretch your euros. My most important tip is to exchange a limited amount of dollars because 99 percent of the venues take credit cards. This will also help you keep track of your spending.

CitySightSeeing Milano and Milano Hop On Hop Off has three routes that you can travel for two days. The routes are interconnected and themed to history, sports and modern architecture. The double-decker bus takes you to within walking distance of more than 30 of the most significant sites. Free WIFI is available on board. (www.city-sightseeing.it/it/milano).

The transit system in the city is expansive, clean, safe and convenient. A 24-hour pass costs 4.50 euros and is good for a short stay. The MilanPass is comprehensive and covers transportation, museums, attractions, sightseeing and restaurant discounts. The pass costs 69 euros with a 400 euro value. (www.themilanpass.com). 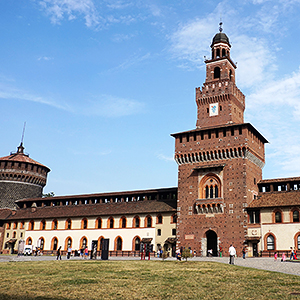 The red brick Sforzesco Castle, originally a fortress, was constructed from 1358 through 1368. It has served many functions, including as a private residence, and now houses several museums.

A highlight of the collection is Michelangelo’s final sculpture, the “Pietà Rondanini.”

Milan was an early religious center and some sites remain. The Lombard Romanesque Basilica of Sant’Ambrogio (St. Ambrose is the patron saint of Milan) was constructed in the 4th century AD, as was the Basilica of San Lorenzo Maggiore, the oldest church in the city.

San Lorenzo is also the location of 16 marble Corinthian columns from the Roman Era. It was built in an octagonal shape atop a Roman amphitheater. 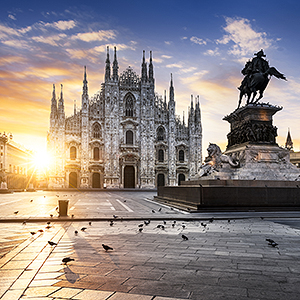 The Quadrilatero della Moda is the area with the iconic Duomo at its heart. This is the most historic section of the city.

The Milan Cathedral, the Duomo, the world’s fifth largest cathedral, dates from 1386 and was built over a 500-year period.

This architectural marvel boasts 132 marble spires, more than 3,000 statues and the Madonna atop the tallest spire covered in 3,900 pieces of gold leaf. 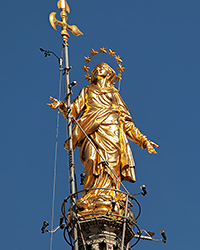 It is one of the world’s largest Gothic churches at 514-ft. long and 301-ft. at its widest. Inside there are 52 pillars, one for each week of the year. The 4th-century baptistery is also on view.

Tours include the cathedral interior, museum, archaeological area and rooftop terraces with a view of the Alps. This was the site of Versace’s funeral. Tickets should be purchased online prior to your visit. (www.duomomilano.it/en).

Adjacent to the Duomo is the Galleria Vittorio Emanuele ii, a pedestrian promenade beneath vaulted glass arcades designed in 1865 by Giuseppe Mengoni. Ironically, Mengoni fell to his death from a scaffold just prior to the Galleria’s opening. Trendy restaurants and designer boutiques line the incredible mosaic flooring including Armani, Bulgari, Dolce & Gabbana, Fendi, Ferragamo, Gucci, Prada, Valentino, Versace and Zegna. The floor is designed to replicate a Latin cross. The floor mosaics include the zodiac signs and it is said that those who trod on Taurus the Bull’s genitals will have good luck.

One block from the galleria is La Scala Opera House and Museum. Founded in 1778, it has presented performances by the world’s leading artists.

Tours of the museum include a special exhibit on Maria Callas, memorabilia from past operas, costumes, portraits and an opportunity to view the theater auditorium through a large window. Special note should be taken of the gilded galleries and awesome chandelier. This is Europe’s largest opera house. Specialized tours are also offered. (www.teatroallascala.org/en). 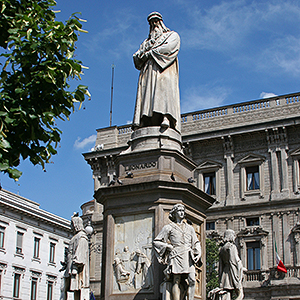 The Navigli District and Brera are two of the city’s most exciting neighborhoods. Navigli is a canal district filled with dining and shopping options. The canals were made navigable in the 1300s to haul the marble to build the Duomo. Brera is a vibrant artisan district that features exciting nightlife, dining and entertainment.

The major public art gallery in Milan is the Pinacoteca di Brera. Its collection of Italian artworks is formidable and includes Mantega’s “Dead Christ.” It is the main public gallery for paintings in Milan, and contains one of the foremost collections of Italian paintings.

Leonardo da Vinci moved to Milan in 1482 under the patronage of Duke Ludovico Sforza. He would remain there until 1499, completing “The Last Supper” in 1498.

“The World of Leonardo da Vinci” is an exhibition that includes interactive kiosks, reconstructions of his machines, codices, paintings and drawings.  Audio-guided tours bring Leonardo to life. 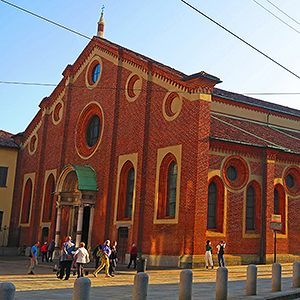 Santa Maria delle Grazie showcases the original of “The Last Supper.”  It is on the wall of the monastery’s dining room. It was painted between 1496-98 and was restored over 20 years. On the opposite wall is Giovanni Donato da Montorfano’s, “The Crucifixion,” painted in 1495. Leonardo’s work is not a traditional fresco.e applied tempera directly onto the dry wall. Visitors should purchase tickets prior to visiting online. Admission is controlled and viewings last only 20 minutes. (www.musement.com/us/milan/leonardo-s-last-supper).

Fashion Week leaves no doubt that Milan is the European Fashion Capital. Shows take place throughout the city and historic sites are filled with trendsetters in cutting edge attire. www.fashionweekdates.com

Milan is a total destination, but the city is also ideally situated for excursions to the Alps, Verona, Florence, Rome, Lake Como and Turin. Turn your vacation into something extraordinary.